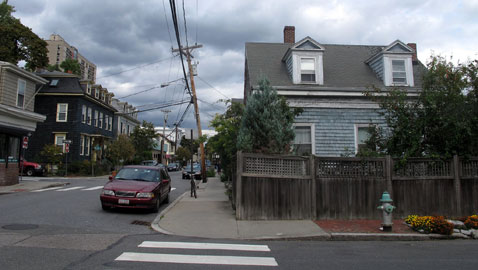 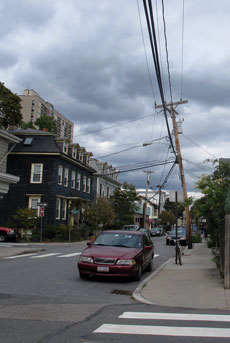 Pearl Street is due for traffic improvements, with much debate and one city councillor aiming to kill a “Complete Streets” proposal. (Photo: Nick Normal)

The MBTA is going through a rough time, but solutions to delays and breakdowns seem elusive. One obvious (albeit small) opportunity for improvement is redesigning Pearl Street. So far, the conversation about the reconstruction has erroneously been framed as a showdown between bikes and parking. In reality, the redesign is an opportunity to exemplify the future of urban transportation: more efficient public transportation, more bicyclists and pedestrians, and fewer cars, which means fewer emissions.

The “complete streets” redesign by Cambridge’s Community Development Department proposes eliminating parking on one side of the street during the day to create a bike lane and widening the street to allow enough room for bus lanes to be “generous and clear.” However, the plan, while a great step forward, is missing some key elements to ensure efficiency and safety.

The 47 bus has five stops on Pearl Street and carries an average of 5,036 passengers every weekday. All of these stops occur in about a half-mile area. The redesign needs to readjust bus stop frequency, a proposition that has been discussed by Joe Poirier and Dylan Russell, two life-long Cambridgeporters. They also note that buses are unable to completely pull to the curb of Pearl Street, and advocate for bumped-out curbs and lengthened stop areas. This would quicken passenger exchanges, reduce travel times, and lessen emissions and noise pollution. And, upon relocating stops, the city should install sheltered waiting areas with travel information, a measure that has been shown to attract riders, direct travel and support an integrated pedestrian network.

The plan should also better address the street’s walking infrastructure. It should repair the uneven surfaces and widen the walking area. Doing so would accommodate students walking to two nearby schools: Prospect Hill Academy and Morse Elementary School.

It is important that the redesign addresses biking. Studies have shown that having a designated lane for bikes increases route ridership among cyclists, and also among those who don’t typically ride bikes on the street, such as children and the elderly. In addition, a designated lane may encourage more Hubway users and make their travels safer; these riders often don’t wear helmets, and face riskier rides than other cyclists who have already admitted to feeling unsafe on Pearl Street.

These transportation improvements don’t need to exist as a tradeoff for convenient parking. Data provided by the city show that citywide, the demand for parking permits is declining. In 2010, the average number of permits per household in Cambridge dropped below one, and this number is continuing to fall. Plus, a study of Pearl Street concluded that side streets are able to absorb the proposed lost daytime parking. Still, there will inevitably be times when it is difficult for residents to find nearby daytime parking on a side street. Here’s where the city should step in to help. During the snow emergency just last week, the city procured free off-street parking at the First Street and Cambridgeside Galleria parking garages for area residents. The city should explore similar options for Pearl Street, making permanent passes available for residents to use in nearby parking garages and lots during the daytime only. Perhaps the city can also allow residents to park their cars to unload bulky items in the biking lane for up to five minutes.

Reducing on-street parking can be done in a way that isn’t unnecessarily burdensome to residents, while still improving transportation for the thousands of bus riders, pedestrians and cyclists that travel the street every day. The City Council must think of the transportation needs of Cambridge residents at large and the need to reduce greenhouse gas emissions. It should oppose efforts of city councillor Tim Toomey to kill the complete streets proposal, and instead consider calls to take the complete streets beyond its current plans to best accommodate all travelers.