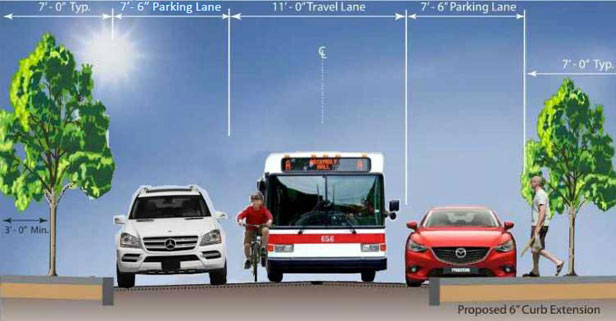 Our decisions now will influence our health and culture for generations to come.

Cambridge’s plans to reconstruct Pearl Street are inadequate and incompatible with our shared goals to reduce carbon emissions and improve public health. Current proposals, dubbed the “base plan” and “complete street plan,” offer residents a choice of status quo or positive step forward – but neither create the truly livable, responsible streetscape demanded by our residents and City Council.

A major one-way route for trips from Central Square to the Boston University Bridge and into Boston and Brookline, Pearl Street is outdated and dominated by auto use. Two-thirds of the road is for parking cars and one-third is for driving them. There are no accommodations for cyclists. MBTA buses, which barely clear the narrow corridor, must pull over at inadequate bus stops to discharge and pick up passengers, slowing travel times, increasing noise pollution and endangering cyclists.

Pearl Street needs to be redesigned as a livable corridor that doesn’t just accommodate but encourages residents to ride bicycles and use MBTA bus service. The “complete street” design needs to be augmented: A one-way protected bike lane should be included on the southeast side of the street, with trees planted to distance cyclists from pedestrians. All bus stops should be safe, welcome places with roofs and posted schedules. Each stop should be a bumped-out curb on the northwest side of the street, allowing buses to exchange passengers more quickly, thus speeding travel times, reducing carbon emissions and limiting noise pollution. Raised intersections should be placed liberally along Pearl Street, and sidewalks should be widened to accommodate wheelchair and stroller users.

Resident comment on the project has illustrated a distinct back-and-forth between proponents of progressive, environmentally sustainable transportation and supporters of convenient public parking. Concerns that a bicycle lane will displace a full lane of parking (the “complete street” plan) are based upon a daytime-only loss of parking along one side of Pearl (meanwhile, neighboring Somerville is removing 90 spaces on Beacon Street). This displacement would, however, function positively as both a sustainable carrot and stick; cycling and bus use would be safer, easier and faster, while parking a car would take longer. The proposed “complete street” plan reflects the community’s desire to reduce pollution and encourage sustainable transportation – but it still falls short.

Private auto parking has become a particularly enduring distraction via Councillor Tim Toomey’s latest policy order, which demands Pearl Street is reconstructed with no changes to cycling or bus infrastructure. Toomey, who is typically a strong supporter of cycling and public transit, has confounded local transportation and cycling advocates by proposing Pearl be reconstructed to status quo auto-centric specifications, even after an extensive city-funded study determined neighborhood parking spaces are 40 percent to 50 percent vacant during the day and 25 percent vacant at night. Opponents have further distracted from the issue at hand by illegally putting flyers under windshields in the neighborhood.

Cambridge has long since determined a commitment to environmental sustainability. Debating carbon-emitting convenience against public health is no longer on the table. Cambridge councillors should vote no on Toomey’s order to maintain the status quo, and City Manager Richard C. Rossi should have Pearl immediately redesigned, building up from the “complete street” model. Central and Kendall Square residential construction is continuing, and Harvard’s titanic Beacon Railyard area development is under way. Encouraging public transit use and cycling is not an “option” for our city – it is the righteous way forward to a healthier, less polluted and more beautiful future.