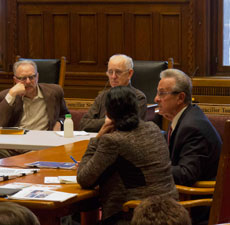 A potential of price tag of $2 million for a citywide development master plan stunned and scared city officials Monday at a City Council roundtable, but a Planning Board member helped put the figure in perspective.

The master plan process, launched by councillors in April 2014 and identified as a three-year process a year later, had so far been lacking a cost estimate for its expected start this fall. But at the two-hour roundtable that replaced their usual Monday meeting, City Manager Richard C. Rossi told councillors “It’s going to be expensive, very expensive.”

He clarified that while he feels the city has plans guiding it on planning and development issues, albeit “maybe not in the format people would like to see,” he also said that creating a newly unified, comprehensive plan based on fresh community input was “in general … a good exercise.”

Still, he had been “stunned by the price” upon hearing it, and some councillors expressed surprise as well.

“You’re scaring me right now with that number,” Tim Toomey said, while Leland Cheung said he “gasped” upon hearing it when he thought of “how many units [of affordable housing] we could build” with the money.

Iram Farooq, acting assistant city manager for community development, said the process lets the city learn of goals that can guide the council when developers ask for custom zoning. But it was Hugh Russell, a 26-year member of the Planning Board and until January its chairman for five years, who discussed the cost in terms of the dollars put into development each year in Cambridge.

The city might spend $24 million a year on city projects, and private developers many times that, Russell said, noting that the city’s water treatment plant alone cost upward of $70 million. “What’s the value of the city’s investment in infrastructure?” he asked. “It’s 100 times” the estimated cost of a master plan.

“So $2 million to me seems like a reasonable investment to get things right,” Russell said.

Birth of the plan

The city embarked on a master plan after a citizen complaint to the Attorney General’s Office in 2013 charged Cambridge was violating state law by lacking one (city lawyers said in November that they believe the city is exempt from that law) and pressure resulting from what has been called a “tsunami of development” in the Alewife area.

Now Alewife has been identified as a priority for the first year of the master plan because it is prone to flooding but has also seen a flood of construction in recent years, with last year bringing more than 1,000 apartments to the area and some 1,500 more due to be finished this year – surpassing the amount of development expected for roughly a decade from now in the city’s Concord-Alewife Plan from 2005. Essentially all of the development has been residential, rather than the mix of housing, office, retail, municipal and open space called for in the plan.

“The city has done a great deal of planning,” Russell said. “People say, ‘This isn’t working out the way we hoped’ [and] you have to go back and look at the consequences.”

With the early focus on a single neighborhood, Mayor David Maher wondered whether there any “low-hanging fruit” among zoning issues could be addressed in the first couple of years of the process. Farooq said it was possible for Year 2 – although she held back from promising because “I want to be very realistic.” When Russell asked about whether the master plan might delay the long-stalled C2 process defining the future of Central Square, Rossi said it would be “worse if we delay” and preferred starting on it and understanding it might come back for adjustment.

With so many priorities weighing on the 35-person Community Development Department, and with the example of a recent Somerville process prominent among research by councillor Nadeem Mazen, officials explored whether the master plan process should be done in-house, using city planners, or by bringing in consultants. A request for consultant bids has already gone out, with responses due back the week of June 22, but the positive response Mazen saw from Somerville and Toomey’s worries about the cost of a master plan had both hoping to see much of the work done by CDD.

“We are using a lot of staff,” Rossi said, but the magnitude of the work meant it wasn’t realistic to rely solely on in-house work.

H Theodore Cohen, chairman of the Planning Board, had his own perspective on the division of labor for the master plan: “Don’t take staff away from us. We need them desperately,” he said. 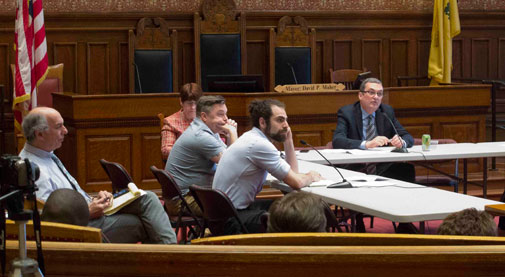 Much of the meeting was taken up with comparisons with Somerville and its five-year SomerVision master planning process, which Mazen applauded for being driven primarily by residents and a resident-filled 60-person steering committee that included Stuart Dash, Cambridge’s director of community planning but a Somerville resident living near Union Square. A direct comparison was called impossible because the Somerville master plan was only a set of principles and priorities that are only now being addressed – with the help of consultants, Farooq noted.

“They got a great outcome from insisting on citizen input,” Mazen said. He urged a similar level of resident engagement in Cambridge to ensure a similar level of enthusiasm for the outcomes and tamp down “wild accusations” from some that city officials “decide, then announce” instead of holding an honest, balanced discussion. Mazen said there might be hundreds of residents who felt this way, if not thousands.

There was strong pushback from officials such as Rossi, who said Mazen’s “broad-brush statements need to be corrected,” and Cheung, who said the statement that “there are wild accusations is itself a wild accusation.”

Cohen, though, noted that the Planning Board was in the process of changing some of its own processes. In comments in January, as he was appointed chairman, he said he wanted to “re-instill everyone’s faith in the board” after a difficult year in which there were repeated accusations before the board and council that the development process was tainted in favor of builders and gave short shrift to the fears of a project’s opponents. There have been repeated complaints to the council during public comment that the C2 process and a similar one for Kendall Square were also tilted in favor of unrestrained development and prevented foes from being heard, which supporters had deemed unsupported, if not wild, accusations.

Farooq said the council would get updates on the master plan at least twice a year, and councillor Marc McGovern asked for more. He hoped it would be kept on the council agenda as a standing item so reports and public comment could be heard at any time, as the School Committee had done for a recent restructuring of the school district called the Innovation Agenda. But he seemed to get acknowledgement from Rossi and Farooq when asking for quarterly or even more frequent reports.

This post was updated June 9, 2015, with information about the council getting quarterly or better reports on the master plan process, which was contributed by John Hawkinson.

Previous story: Surges in city population and construction laid out ahead of a master plan roundtable