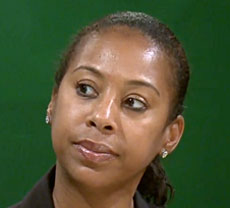 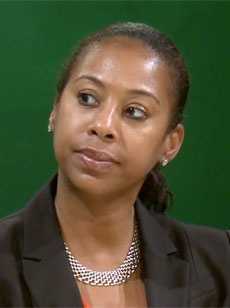 Andrea Spears Jackson, chairwoman of the License Commission, during a filming of a Cambridge Community Television show last year.

An Upper Crust replacing Stone Hearth Pizza near Porter Square and a Phoenix Landing  owner taking over the former Hit Wicket restaurant space in Inman Square were two of the final items Andrea Spears Jackson would oversee as head of the city’s License Commission.

The items were heard Tuesday, her final meeting, and Wednesday was to be her final day as chairwoman, according to Sheila Keady Rawson, of the city’s Personnel Department. (A letter from the city solicitor later gave Jackson’s last day as Aug. 25.)

After Jackson gave notice, a job listing for the position was posted by the city July 22. There was no interim chair identified by the city as of Thursday, Rawson said.

Jackson declined repeated requests for comment about her plans or reasons for giving notice.

Her tenure lasted a year and eight months in what was to be a three-year term, replacing the commission’s longtime interim leader, former director of personnel Michael Gardner. He had been in the position since the fall of 2010, replacing attorney Richard Scali when he went on a personal leave of absence after serving since 2005 and never returned.

The work of the commission can go on with two members, Mayor David Maher said at the time.

Much of Jackson’s time in office has seen the rote comings and goings of restaurants, punishment of straying taxi drivers and acknowledgement of changing stock ownership or managers at private clubs. She kept a measured tone during meetings, often giving second chances to offenders and on rare occasions agonizing publicly over a decision, expressing being torn over how much leeway to give business owners or organizations that erred or been slow to resolve situations. Taking the Hi-Fi Pizza alcohol license May 28, after the eatery had closed March 2014, seemed to be among her most difficult decisions, especially after the commission had allowed Don Holland, the brother of Hi-Fi owner Frank Holland, to hold onto his ManRay nightclub alcohol license for more than eight years. (“Your brother is in a whole different category,” Jackson told Frank Holland, because the Hi-Fi license limbo prevented its replacement in Central Square from buying another alcohol license.)

But she was slow to come to a decision, with the commission’s other two members, Police Commissioner Robert Haas and Fire Chief Gerald Reardon, like pulling her one way and then another.

“Just go ahead and tug on the heart strings, counsel,” she told Holland’s lawyer during the hearing, reminded of his eviction.

“I am really torn … I’m really struggling with it,” she said, before deciding: “I don’t want to set the precedent, so I’m going to be the bad guy and I’m going to make a motion that we revoke the license.”

Controversies over car services such as Uber and Lyft made for a local firestorm last summer, and another trial came after the commission seemed to side with a local business owner worried about competition and was clearly hostile to a couple’s bid to open a wine bar and charcuterie in Mid-Cambridge.

Now running for City Council seats, the couple of attorney Kim Courtney and Xavier Dietrich began attending every commission meeting, recording audio and then video to post online among other resources for potential business owners in Cambridge. After months of analysis, they had a verdict: “The License Commission and police are among the worst offenders” of picking and choosing when and how to apply state and local laws, said Courtney in an essay published this month.

Courtney called out Jackson during a Monday meeting of the City Council, saying it was time to replace her – drawing a rebuke from city councillor Tim Toomey that personal attacks weren’t allowed in the council chamber.

Another city official said Jackson had been hounded from her position by Courtney and Dietrich.

The couple say commission members and staff have tried to undermine their research into how the panel operates by accusing them of harassment; in one strange confrontation, the commission stenographer seemed to be filming the couple surreptitiously with a propped-up phone before a meeting, and the commission and staff have several times revealed clumsiness around open meeting laws about citizen recordings. But at meetings, the couple are silent unless spoken to, and on Tuesday confirmed they had essentially no contact outside meetings – with Dietrich saying he’d literally never spoken with Jackson. “We’ve been nothing but respectful,” Courtney said.

For Jackson, taking the role in late 2013 marked a return to Cambridge. Before moving to Atlanta in 2001, she was the city’s employee relations manager and then purchasing agent.

Upon moving back from Atlanta, she worked for the state, according to City Manager Richard C. Rossi. She has bachelor’s and law degrees from Suffolk University and has been active in many Cambridge community associations, serving as a board member of the Cambridge YWCA and as a member of the Martin Luther King School Neighborhood Council, Rossi said.

“Ms. Jackson has a great deal of experience in project management, regulatory proceedings, legal analysis and personnel administration. I am pleased to welcome Ms. Jackson back,” he said.

This post was updated Aug. 18, 2015, to add information about Jackson’s last day with the commission.