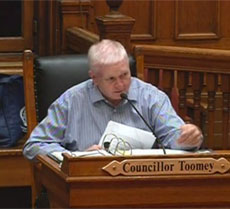 City councillor Tim Toomey wants three Aug. 10 orders related to taxis and car services such as Uber to be reconsidered.

City Council action on the war between taxis and their car-service competition goes on, despite there not being another full council meeting until Sept. 21. (A return to regular business Sept. 14 after the summer break was canceled.)

Vice mayor Dennis Benzan said Thursday that he and councillor Leland Cheung hope to bring together the council’s Economic Development Committee and stakeholders in the car-service conflict, including banks that back the purchase of pricey taxi medallions, to try to come up with regulatory solutions. The meeting may be from 10 a.m. to noon Sept. 15, he said, pending scheduling approval by the city clerk.

Update on Sept. 1, 2015: The date didn’t work out, according to the City Clerk’s Office, and a replacement date is being sought.

Meanwhile, the three orders passed Aug. 10 at the council’s sole summer meeting about taxis and car services, all passed unanimously, are facing surprise vote “reconsideration” by councillor Tim Toomey, who is also a state representative serving parts of Cambridge and Somerville.

The reasons for his call to reconsider the three votes is unclear; neither Toomey nor his aide responded to a request for clarification emailed Monday to his personal and council addresses, or left in a voicemail Wednesday at his council offices.

Donna Blythe-Shaw, a taxi driver labor representative, said she didn’t know until Thursday that Toomey had called for reconsideration.

“I don’t get it,” Blythe-Shaw said. “I don’t understand why he would even do that. Why would he file for reconsideration? Does he think he’s going to get a different vote? Is this some kind of politics based on a couple of testimonies that were made by two of the speakers there that he objected to?”

“He has a responsibility, in my opinion, to explain why he wants reconsideration. He owes it not just to his colleagues, but also to the citizens of Cambridge and to the individuals in the taxi industry who are fighting for their lives,” she said. “I’m getting very, very frustrated. No one’s reached out to me about this.”

Even more confusing is that in March, Toomey used a political maneuver to prevent councillors from calling for reconsideration of any votes, explaining that “I’m trying to move things along here, get things done” and would “try to” do the same every week But he hasn’t done so since, and  has now called for reconsideration himself four times.

The latest items he wants to reconsider include two policy order resolutions (here and here) urging the state to hurry work on regulations that could level the playing field across Massachusetts among drivers for taxis and Uber, Lyft and other on-demand car services. The state is holding a Joint Committee on Financial Services meeting from 11 a.m. to 3 p.m. Sept. 15 – the same day Benzan seeks to hold a Cambridge meeting – to hear four bills about the services, including one from Sen. Linda Dorcena Forry, of Dorchester, and Rep. Michael Moran, of Brighton, that would hit the services on background checks, insurance and “surge pricing,” and another, less restrictive version by Gov. Charlie Baker. 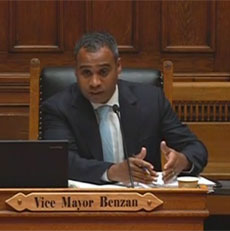 The third item Toomey wants to reconsider is an order by Benzan and Cheung that the city manager explore “an immediate moratorium” on fees paid by taxis to the city until new city or statewide car-service regulations were put in place. There has been no report back, and the order refers to a mayor-led roundtable, but not a committee meeting.

With the likelihood the city meeting run by Benzan and Cheung would take place at essentially the same time as state legislators would be starting to address broader laws, Benzan suggested it would be complementary.

“We’d be looking at some of the gaps we see in regulations promulgated by the state. They don’t really address Uber vehicles at any given time, or the future of taxi medallions. We’d be taking a really close look and coming up with regulations that will fill the gaps,” Benzan said.

He could face resistance within the council, where E. Denise Simmons said she sympathized with taxi drivers but felt the city’s only course of action was to look to the state. If the city made its own rules – as it has for the taxi industry, regulated through the city’s License Commission – “I just don’t know how we would regulate that,” she said at an Aug. 10 meeting.

Benzan believed the resolutions urging state action had already been sent, making the call for reconsideration of those two moot. The City Clerk’s Office said that one of the two policy order resolutions had been sent before Toomey’s motion.

And while he said he didn’t want to speak for Toomey, the vice mayor believed Toomey would “probably be taking back reconsideration. He’s not looking to reconsider … he’s just gonna let it die. I don’t think he’ll ask for any action.”