Toomey strikes blow against, for hypocrisy 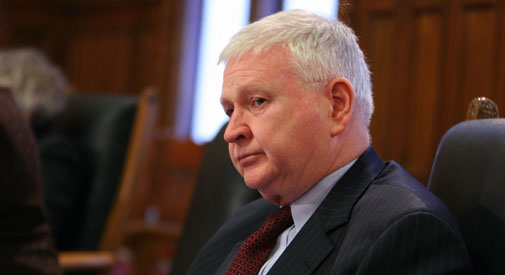 Toomey strikes blow against, for hypocrisy

At the same meeting where he calls out his peers for hypocrisy, the city councillor stumbles over his words about ‘reconsideration.’
By Marc Levy

City councillor Tim Toomey called out some hypocrisy last week, noting that a zoning proposal by three of his peers had “absolutely no feedback from the community” – the same argument that had just caused a lengthy pile-on of the majority against councillors Dennis Carlone (who was out sick) and Nadeem Mazen for a zoning proposal about housing in Central Square.

“I would move that this also be defeated. You could use the same argument we just used on Policy Order No. 12,” Toomey said, before councillor Leland Cheung – a co-author with E. Denise Simmons and Marc McGovern – used his “charter right” to table the order until the next meeting.

If only Toomey had just as fine a sense for all hypocrisy.

Last month he revived a little-used procedural move that takes away councillors’ short-term rights to reconsider a vote or meeting’s worth of votes, locking in the initial results forever.

This move to block even the option for reconsideration followed a lost 4-4-0 vote about having the city manager review questions about recent License Commission controversies, taken on a week councillor Craig Kelley was away.  It’s possible Kelley would have returned the next week and the motion might have passed, 5-4.

Pushed further on whether a specific policy order inspired it, Toomey said, “No.”

And asked if he would be making the motion every week to ensure council actions kept moving along, he said, “I’ll try to.”

He hasn’t used it in the two chances he’s had since then.

But skip forward again a month, back to the meeting where Toomey called out fellow councillors’ hypocrisy about zoning proposals, and you’ll find him also trying to revote a Pearl Street reconstruction project that had been sent off to committee without a bike lane. He had been on the losing side and wanted the vote to be heard under “reconsideration.”

An email sent Friday reminded him of all of this and asked for clarity on his policy on reconsideration, which now seems to be that he doesn’t want it used unless he wants to use it – and asked again if there was something specific on the March 16 agenda he was trying to keep from being reconsidered. As of Monday night, he has not replied.

Of course these rules exist to be used. This isn’t a complaint about the law or its use so much as it is about a councillor falling back on a claim of procedural diligence and pure motives instead of standing up and being clear about why he’s choosing to act a certain way. (Toomey’s not the first or the only to do this.)

Or it’s an observation about a councillor looking pretty hypocritical just as he calls out his peers for hypocrisy.

If Toomey gets in touch to explain his behavior, these conclusions of apparent hypocrisy are open to reconsideration.