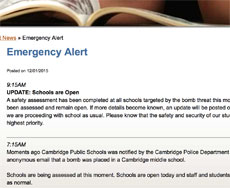 A detail of a screen capture shows messages posted for parents Tuesday after a bomb threat at Cambridge middle schools.

Police learned of a bomb threat against five Cambridge public middle schools Tuesday morning, leading to an assessment of campuses while classes went on.

“Schools are open today and staff and students are encouraged to report as normal,” a school district alert told parents at 7:12 a.m., announcing that the threat had been passed on to officials by police only moments earlier. “Schools are being assessed at this moment.”

At 9:21 a.m., another alert said schools would stay open, as a safety assessment had been completed clearing them of an actual threat.

“The potential threat has not been substantiated at this time,” said Jeremy Warnick, director of communications and media relations for Cambridge police. “Enhanced security will be provided to each of the upper schools throughout the course of the school day.”

Police said they received an anonymous email that a bomb was placed in a Cambridge middle school, similar to the Nov. 16 threat against the high school – except that threat at Cambridge Rindge and Latin School was received hours before classes began, and a search cleared all school buildings before students arrived.

The school day went on because it was determined there was “no credible threat,” Police Commissioner Robert Haas said last month.

That threat was posted to an anonymous blog at 4:48 a.m. and spotted by another person, who warned police anonymously via email shortly afterward. “The only reason we got it is that some person saw it,” Haas told city councillors in November. An investigation into the threat had begun, he said.

The Nov. 16 threat became known to the School Department at 6:01 a.m. and a search of school buildings was complete by an 8:30 a.m. meeting where administrators decided to carry on with the school day.

Parents were left with questions Tuesday after the initial alert, some of which they asked the school district via social media.

They wondered if all schools were being inspected, or just the middle schools, and they also asked about the investigation.

“Are the police looking into IDing the source of the threats?” one parent asked via Twitter. “No emails are truly anonymous.”