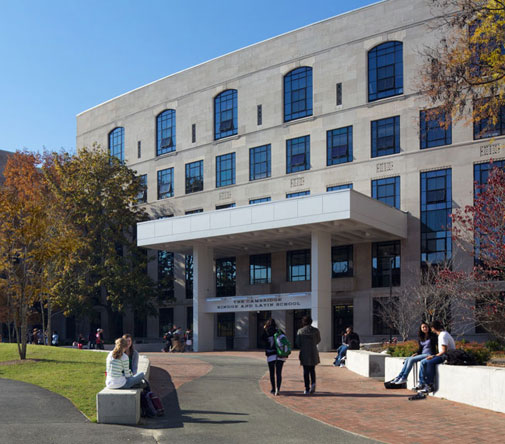 Cambridge Rindge and Latin School had a bomb threat Monday, and students came to learn Harvard had as well. (Photo: HMFH)

The district’s approach to the ultimately false bomb threat Monday was questioned during School Committee public comment Tuesday by Cambridge Rindge and Latin School senior Gigi Laurent. “Why weren’t we informed?” she asked, referring not only to the potential threat at the public schools but to the threat called into nearby Harvard.

The threat became known to the School Department at 6:01 a.m. and a search of school buildings was complete by an 8:30 a.m. meeting where administrators decided to carry on with the school day. Parents seemed to be alerted to the situation at different times of the day, Laurent said, and not in expected ways, such as through the phone system her mother has come to rely on. Laurent also had wanted to know as she left school that some Harvard buildings had been evacuated, roads closed and public buses rerouted. Many students either relax in Harvard Square, work there or, like her, catch a bus from there, Laurent said, and given student limits on phone and Wi-Fi services during school, most kids walked out without knowing anything. “Can it be settled differently the next time?” she asked.

The questions were similar to criticism that have dogged the district on communicating during issues as common as snow days and as extreme as when a teacher is charged with possessing and making child pornography.

Two hours later, at the end of the meeting, Superintendent Jeffrey Young was asked by committee member Richard Harding to respond to Laurent’s concerns.

“Our aim yesterday was to get the story accurate and correct and communicate quickly,” Young said, going into detail on the challenges of managing those sometimes competing interests, especially in light of tensions after fatal Paris bombings. Officials followed a district emergency operations plan, a copy of which is in each classroom and office in the district, he said, but there would be a debriefing to assess the district’s response, with a report to follow “within a matter of weeks.”

Reached after the meeting, Young wrote that Laurent’s point about potential problems in keeping at least high school students in the dark about what’s happening outside of the schools “was a good one. Her comments/concerns, along with those of other people who have written to me or called me, will be part of what I will bring to the table when I have my debriefing meeting with the city manager and police commissioner.”

The committee passed a motion by member Mervan Osborne to enact immediately two elements of controlled choice policy changes made Sept. 29, essentially rolling back changes put in place in 2013

Changing calculations of socioeconomic balance flexibility immediately instead of for next year’s school lottery, as originally passed, affects wait lists, particularly at the Dr. Martin Luther King Jr. Elementary School’s Chinese Immersion program. Parents from the program have petitioned the committee regularly for these changes at public comment periods such as Tuesday’s. Managing enrollment is especially tricky for immersion programs, which have to balance socioeconomic status as well as try to balance language requirements. Immersion programs, as Amigos and Olá have also experienced for Spanish and Portuguese languages respectively, have difficulty absorbing new students after the first year or two, and the King Chinese Immersion program had vacant seats despite a wait list of students unable to get in because slots for their socioeconomic status were capped.

This motion was passed without comment, having been greeted warmly when Osborne suggested it at the Oct. 20 meeting.

The very same motion was made by member Patty Nolan at the Oct. 6 second reading of the controlled choice policy change – an amendment that would make these two parts of the policy change effective immediately “to impact wait lists” – after checking with Chief Operating Officer Jim Maloney on feasibility.  “Off the top of my head,” Maloney said, “it’s not a major issue. It wouldn’t be difficult to make the change.”

But there had been strong protest from many of her colleagues. “Do you believe it is fair to change the rules midyear?” Harding said. “I want to support a remedy for families but I also want it to be fair.”

Vice chairman Fred Fantini also pushed back, saying he preferred not to make the changes in the first place – though he ultimately voted for them.

Kathleen Kelly agreed that she didn’t want to see changes made immediately, saying she wanted a “fuller discussion of controlled choice” and to have a better understanding of what the changes would mean.

Nolan’s motion was put aside decisively. Osborne, who was not present at the Oct. 6 meeting, suggested the same thing the next meeting, filing a motion that ultimately passed unanimously Tuesday.

The committee was in closed-door session for 90 minutes before the regular meeting, delaying the start by a half-hour, and broke early to go back behind closed doors to discuss contract negotiations with Kenneth Salim, who is expected to be the district’s next superintendent. Announcing during the meeting that they had a “hard deadline” of 8:50 p.m., “when our attorney has to leave the building,” Maher asked committee members if they could move agenda items forward as a group for approval.

Hearing there were member questions on some of the items but pressed for time, Maher asked Chief Financial Officer Claire Spinner which “were important.” Spinner pointed out that “we haven’t had a meeting since October” and there was some urgency to funds flowing on such things as special education out-of-service services. Instead, Maher opted to table the 13 contract and grant award recommendations put forth by the administration until a special meeting, announced for 5:30 p.m. Tuesday.

In addition to Osborne’s controlled choice motion, the committee passed without comment motions from members including: naming Deutsch Williams Brooks DeRensis & Holland as the committee’s law firm during superintendent contract negotiations; the scheduling of a January retreat with the superintendent “to reaffirm the working relationship and short term goals of the Cambridge Public Schools” for the remainder of the school year; and the adoption of “norms and goals” for meetings. A motion recording support for the California Teacher’s Association in a lawsuit over collective bargaining rules was made by Nolan, but tabled by Harding.