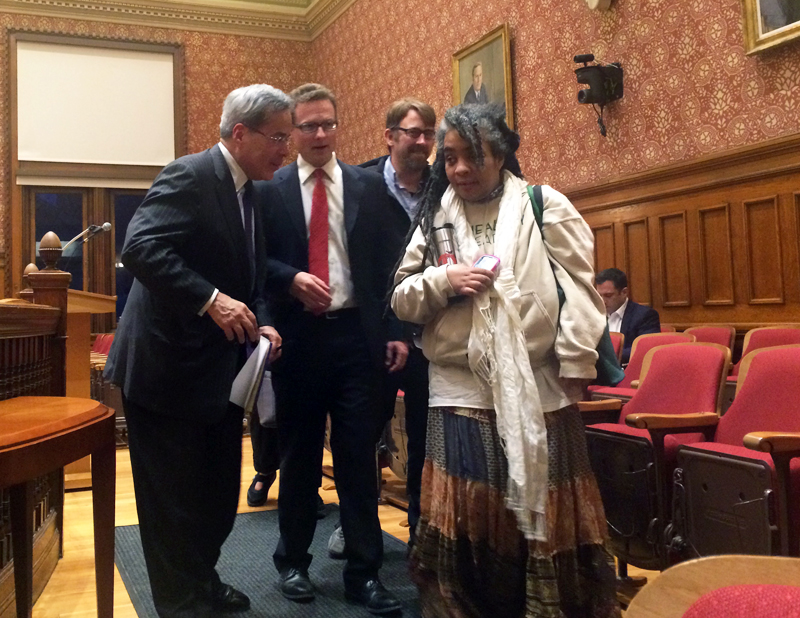 Michael Dundas, chief executive of Sage Cannabis, leaves Sullivan Chamber surrounded by supporters after a vote Monday helped clear the way for for his business to come to Mid-Cambridge. To the right is Mike Crawford and Chandra L. Batra, who spoke in favor of his petition. (Photo: Marc Levy)

The City Council voted 8-0 to approve zoning that would allow a medical marijuana dispensary near Harvard Square. The quest for a dispensary by Sage Cannabis began in November, and is far from over.

The Planning Board will consider the case, and the state has to give Sage final approval. Part of Monday’s vote was approving the writing of “a letter of non-opposition” to Sage that would be sent to the state Department of Public Health by Cambridge’s city manager.

“We’re far from finished with the process, but this is a huge milestone,” said Michael Dundas, chief executive of Sage Cannabis. “When we first started this project, the idea that we could take the rules Cambridge had promulgated and fashion [something] that truly benefited patients seemed like an impossibility.”

Cambridge’s wait for a dispensary has been even longer; medical marijuana was legalized in a statewide vote in 2012, with six dispensaries finally opening statewide within the past few months. The closest is in Brookline. In the years since the vote, the state has changed its rules significantly and Cambridge officials have acknowledged several times that the city’s medical marijuana efforts – creating districts to host dispensaries in the far-flung neighborhoods of Alewife and NorthPoint – failed.

The slow progress has been a source of frustration for residents who turned out in significant numbers to vote in favor of medical marijuana. The council’s public comment period drew more than a dozen speakers, many of whom noted that in 2012 some 79 percent of Cambridge voters were in favor of dispensaries, and the drumbeat of reminders began with the first speaker of the night, Democratic state representative candidate Mike Connolly.

He reminded councillors that 37,237 residents voted for medical marijuana in the 2012 election, as compared with the 17,854 who voted for any candidate in the most recent City Council election. It was an “overwhelming number,” Connolly said, calling it also “an overwhelming mandate.”

Many of the other speakers were patients who said access to medical marijuana helped them with a variety of medical issues, and three spoke to the power of marijuana to get people off hard drugs and keep people safe from opioid addiction – a nationwide scourge that has also hit Cambridge hard. Among the speakers was Stephan Mandile, who said he was a military veteran treated with addictive pain pills after an injury in Iraq. “I’ve been on cannabis for eight months and kicked my dependency on opiates,” Mandile said. “Cannabis has helped me heal, and actually saved my life.”

Other citizens testified to the importance of having easy access to a dispensary, rather than having to travel long distances for medication while sick and in pain, with Nichole Snow, executive director at the pro-medical marijuana Massachusetts Patient Advocacy Alliance, pointing out that there were far more people in the state licensed for pot than were buying from dispensaries. “Do you know why?” Snowe asked. “Because there are only six.”

Speaker Andy Gaus said he owned a home in Boston near a dispensary and assured councillors it would be hard for a stranger to know the business was there. “It’s reasonable for people to be worried about whether a dispensary would [affect nearby children] and reasonable to be concerned about whether it would be something shady in the neighborhood,” Gaus said, “but it is also reasonable to calm down when these fears prove groundless.”

No one spoke against the Sage petition, and the public’s points were recalled by councillors in their own discussion later in the meeting, with vice mayor Marc McGovern saying the dispensaries should be allowed anywhere a doctor’s office is allowed.

A letter from the city’s Law Department said it would not be considered illegal “spot zoning” to approve adding a tiny medical marijuana district allowing Sage to open in Mid-Cambridge near Harvard Square, instead of in the existing Alewife and NorthPoint medical marijuana zones, and with that even councillor David Maher acknowledged he would vote to let the dispensary come. “I get the use, I get the will of the voters of Cambridge,” Maher said. “I’m very disappointed at how this got here.”

That left councillor Craig Kelley as the likely holdout, and he referred to himself as possibly “the only person in Cambridge not excited about this.” Saying he was confident the zoning would pass, he urged officials to keep talking about issues surrounding marijuana, especially as he felt the state was nearing a vote that might allow recreational marijuana use. In a letter to fellow councillors dated Thursday he hoped they might consider imposing additional costs on dispensaries such as Worcester has done, such as getting a marijuana business to donate $100,000 per year to the city, increasing to $200,000 after 36 months of operation and rising with inflation; pay 1.5 percent of gross sales revenue during the first year, increasing to 2.5 percent after 36 months; and contribute $10,000 annually to a local charity “in the immediate vicinity.”

“We’re talking about a nonprofit medical clinic,” Devereux said. “I don’t believe there’s any precedent [here] for extracting a payment from a nonprofit that intends to provide a benefit to the community.”

That was seconded by councillor Leland Cheung, who said he’d rather see Sage pass low costs onto its sick and often low-income customers than raise its rates to pay additional fees to the city every year. “This isn’t another developer,” Cheung said.

There was even discussion of taking away a $25,000 annual fee described in an April 4 letter of commitment that would be imposed on Sage for its first three years in business, which Maher said would cause the Sage petition to be defeated. But when Dundas and attorney Sean Hope were called up before the council to speak to the delay, they said the fee was a non-issue.

“We felt the $25,000 as well as [data collection] conditions were fair and reasonable,” Hope said.

In the end, the council favored the Sage petition unanimously, with Dennis Carlone and Tim Toomey not present for the vote. Toomey, appearing toward the end of the meeting, asked to be recorded as voting in the affirmative, making an 8-0 vote of what had been a 7-0 vote.

This story was updated April 27, 2016, to note the addition of Tim Toomey’s vote to the policy order.