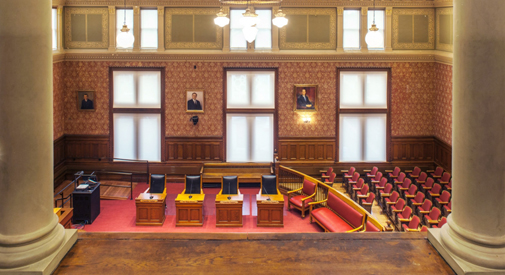 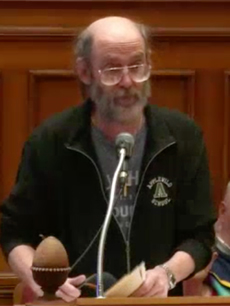 James Williamson is cut off during public comment April 25 for speaking the name of a city councillor.

With surprise proposals on alcohol rules by the License Commission and the undermining of First Amendment rights by the City Council, city government continues to show how far it has to go before citizens feel truly heard and and respected in Cambridge.

In reporting by John Hawkinson, the council is shown to have recently tightened restrictions on public comment, even stopping a citizen from merely speaking a member’s name for a question based on an agenda item and ejecting another citizen from a meeting until he agreed not to hold a sign bearing a message clearly protected by the First Amendment. But there have been other council actions treading an iffy line between civil rights and civil discourse.

The License Commission, meanwhile, has raised alarms with its approach to rewriting city law, drawing concerned comment from business association leaders as well as business owners and their legal representatives. All have expressed feeling blindsided by potentially sweeping changes entered into with literally minimal notice or – even when asked directly – explanation.

Both bodies have responded to residents’ concerns with complaints about feeling hampered by state Open Meeting Law, suggesting the requirement of doing public business in the open is a burden that makes it harder to perform quality service to their constituents. The commission, not very plausibly, cited it as a reason for its surprise presentation of alcohol-pouring rules; councillors have said the law complicates everything from policy order sponsorships to searching for a city manager. 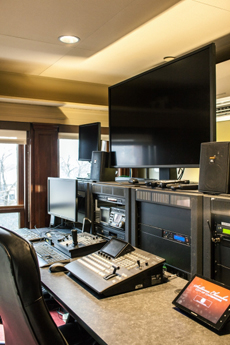 The steps city officials have taken toward better accommodations for the public, in terms of comfortable physical spaces as well as in the simple ability to be seen and heard, have been a mixed bag, too often taken in dragged-out steps that make public access seem like a low priority. Former city councillor and mayor Ken Reeves complained for years before action was taken on getting better A/V equipment citywide. Now that efforts are being made, the results include a council chamber where it is often harder to hear what’s said than it was before “improvements.” Video is often glitchy, and captions for the hearing-impaired (which would result in a kind of searchable text transcript of meetings like those provided by the License Commission and Planning Board) is an unfulfilled promise. The ability to go directly to a specific portion of meeting video (instead of hunting through videos that can stretch to longer than five hours) remains a feature enjoyed by participants in Somerville government, but it eludes Cambridge.

The council’s absurd resistance to televising its roundtable meetings has given way partially after years of public complaint, but leadership has clearly not embraced the concept. Council rules amended Feb. 29 say only that the meetings “may” be broadcast on cable television, not that they will be routinely; the next roundtable after that rules change, held a full month later with the School Committee to discuss a building project that will cost more than $157 million in taxpayer dollars, was not televised by the city.

As a result, when a May 16 council meeting was changed to a roundtable format to hear an update on the Envision Cambridge citywide master plan process, first-term councillor Jan Devereux felt it necessary to ask that the order say explicitly that it would be televised. Mayor E. Denise Simmons promised that was already her intention, though that promise was public rather than official.

The License Commission is exploring places to hold hearings away from its traditional space by City Hall, which is hot, cramped and has terrible acoustics, but so far the solution has been to move to the community room at the police building by Kendall Square – at irregular hours that are hard to attend by working citizens, and in the most recent meeting, with the air conditioning off and a table configuration that resulted in latecomers being forced to stand for more than an hour. Unamplified, low-talking commissioners more than undo any improvement in acoustics, and the space adds a great deal of noise from the busy, echoing police department lobby directly outside the room.

Apparently in response to complaints about its opaque approach to changing city alcohol-pouring laws, the License Commission posted an “explanation” after its Monday meeting. In it, the commission says it will take public comments “for a limited time” at two meetings, including one this coming Tuesday – but there is no such meeting listed on the city’s online calendar.

While there are bright spots in Cambridge officials’ approach to public access, including the Cambridge Redevelopment Authority’s relatively freewheeling approach to public dialogue and the Planning Board’s willingness to reform, upgrade audio-video equipment for presentations and move toward livestreaming meetings, there are many others who give signs they need to be dragged, kicking and screaming, into transparency.

In particular, public officials should stop whining about the obligations and complications of the Open Meeting Law and figure out creative, productive ways to work within it. The law is no more limiting than city rules about public comment at City Council meetings or the ones deciding who gets to open a restaurant and serve alcohol, and how.