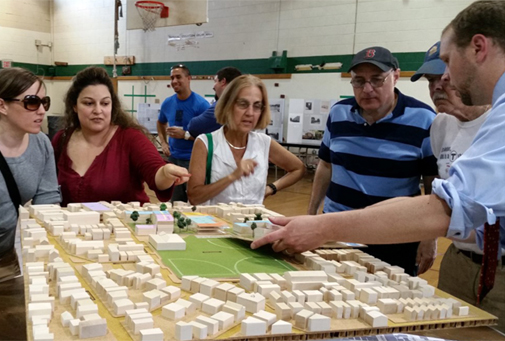 Remaking the school and community complex on Cambridge Street is likely to cost the city some $26 million more than expected – but for a good reason: A feasibility study being finished now suggests the land has enough space to house school district administrators, long relegated to a crumbling leased building in East Cambridge, and to expand other uses there as well.

Despite a rule change this year to allow the recording of roundtable meetings, the joint meeting was not recorded by the city or shown on cable television. Freelance journalist John Hawkinson recorded the meeting and posted the recording on YouTube.

The revamped Cambridge Street complex would total about 266,000 square feet including a separate administration facility with an entrance on Berkshire Street, up from an expected 220,000 square feet, and cost $157 million instead of the projected $131.5 million, Peterson said.

A September 2019 opening for the complex is still possible, City Manager Richard C. Rossi said, though early last year he warned the district that the complexity of the site would mean four years of construction rather than the three it was once expected to take. Adding the administration building would likely mean an even more complex construction.

The public can hear more about plans for the complex from 6:30 to 8 p.m. Thursday at the Frisoli Youth Center, 61 Willow St., in the Wellington-Harrington neighborhood.

About $12 million of the expense at the new Cambridge Street complex would be to sink geothermal wells, install photovoltaic solar panel arrays and take other steps to make the building “net zero” on greenhouse gas emissions, applying lessons from a previous campus built to be net zero, Peterson said.  That building is now operating at about 45 percent of expectations, but expected to improve.

Plans for a proposed King Open/Cambridge Street Upper School & Community Complex is explored at a community meeting in 2015 with designers Arrowstreet. (Photo: Arrowstreet)

This is the second of three campuses the city is planning to rebuild, housing a total of six schools – the Tobin School and Vassal Lane Upper School would be next – with maintenance budgeted for other aging buildings in the district. “We don’t just do the new schools,” Rossi reminded the assembled elected officials. “If you look at the capital budget you’ll see allocations for boilers, for windows, etc. We’re trying to keep up with that too. It is quite an aggressive schedule we all need to pay attention to and keep our eye on, because there is this other side of the board called the city side, and they have needs too.”

The Dr. Martin Luther King Jr. School complex that opened Dec. 21 on Putnam Avenue cost the city $95.5 million, and the upcoming Cambridge Street project was once expected to get some state reimbursement. Instead the entire potential $157 million expense will be paid for through city debt, Rossi said. On March 14 he warned councillors that the pace of such large projects at such significant costs might have to slow to avoid miring the city too deeply in debt.

On Monday, city councillor Leland Cheung said there was even more cause for concern if Republican Donald Trump became president, leading to an economic contraction that would catch the city “over-leveraged” in debt – though Cheung also suggested during another part of the conversation that the city add a possible $700,000 per year to subsidize school meals for families who can’t afford to pay.

Still, Rossi said of the expense, “This isn’t just a school. It’s a library and a pool.”

While the King Open School part of the campus will include a new preschool class, and all campus design in Cambridge is done with flexibility and a growing population in mind, district Chief Operating Officer Jim Maloney noted that the current total of 6,775 public school students is projected to grow to 7,149 within four years, and the district has already grown by more than 700 students in the past eight years. “Our ability to continue to absorb that is all but gone,” Maloney said.

The number of students expected to come to the district is basically the size of a whole new school, School Committee member Richard Harding said.

That begged the question of where such a school would be established, with officials looking briefly at the Alewife and NorthPoint neighborhoods, both relatively isolated areas experiencing significant growth.

The changes also focused attention on the current administration building, the run-down but cheap rental space at 159 Thorndike St., a 125-year-old, 39,666-square-foot building owned by the Roman Catholic Archbishop of Boston. “It has been a decade we have subjected our administration to completely unhealthy conditions in that building,” School Committee member Patty Nolan said, describing the situation as: “We don’t want to sign another contract, we don’t want to leave [administrators] on the street.”

The district recently signed a four-year lease that would keep administrators in the building through 2020, providing a year in which it could transition into new space on Cambridge Street. “The archdiocese has treated the school system really well. In the midst of knowing the administration building was going to be moving, they renegotiated a lease with us,” Committee vice chairman Fred Fantini said. “That was a perfect opportunity to really stick it to the school department and the city, and they chose not to. They’ve proved to be a good partner with us.”

If the administration moves out, it begs the question of what moves in – and while committee member Manikka Bowman and others were excited by the idea it could become the city’s long-sought home for early childhood education, Nolan warned, “We don’t own it, and we don’t know what purpose [is eyed by] the archdiocese.”

Council members Tim Toomey and David Maher expressed alarm that it could be snatched up by a charter school – Cambridge’s potentially fourth such school, which would not only cost the city money through the need to pay students’ tuition, but remove an opportunity for a municipal use or affordable housing.

Rossi was wary about committing to a conversation about buying and working with the building, which is assessed at a value of $4.5 million. It was built in 1890 according to city records that grades its overall condition as “poor.”

“You should all know this is not a done deal. Until it’s a done deal, I don’t want to start thinking on that other building, because we need that other building,” Rossi said of a new home for administrators. He had a further note: “It’s a fair thing to say that any use of that building is going to require major renovations. That is not going to be a simple building to deal with.”