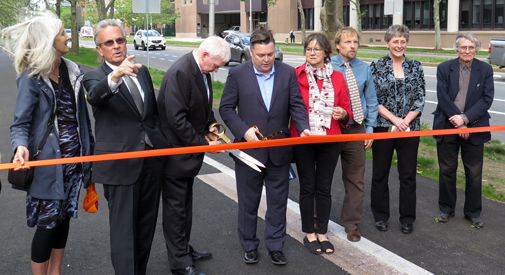 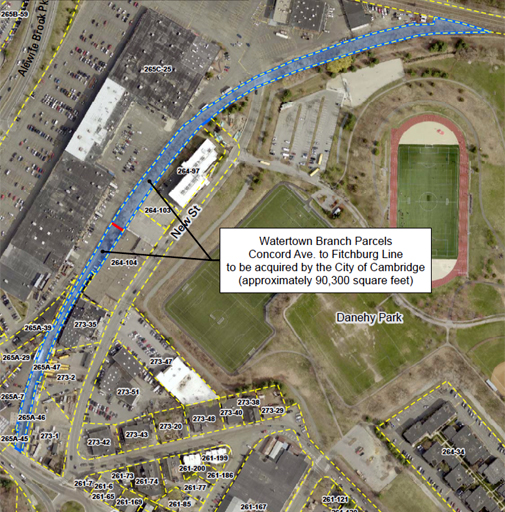 The city is buying a 90,300 square feet arc of land between the Fresh Pond Mall and Danehy Park, shown in blue on a graphic prepared by the city’s Community Development Department.

Fresh on the heels of opening the first section of the Grand Junction Path in Kendall Square for bicyclists, walkers, joggers and inline skaters, the city is putting money down in North Cambridge for land intended to be another crucial section of path.

At the request of the city manager, $860,000 was approved Monday by the City Council to buy an arc of land between the Fresh Pond Mall and Danehy Park – about 90,300 square feet in two parcels of the former Watertown Branch railroad.

“This is something that has been a dream of many people in the Fresh Pond area for many, many years,” said councillor Jan Devereux, who co-founded the Fresh Pond Residents Alliance citizens group in 2014. “We didn’t know this would be possible so soon.”

The potential for the path was identified in a Concord-Alewife Plan from 2005, with benefits including linking it to a path known as the Watertown Cambridge Greenway already being extended into Watertown by the city and state Department of Conservation and Recreation, and to another multi-use path along the Fitchburg rail line that would bring people using the path to Porter Square.

“This will be a tremendous boon for mobility in the Alewife area,” Devereux said. “That’s a really key segment to lock down,” especially in anticipation of eventual improvements at the mall, which was the focus of sharp criticism over pedestrian safety and access a couple of years ago.

Rossi agreed that procuring the rail parcels was a dream come true after several years of angling to buy them from B&M Corp., part of the same Pan Am Railways that sold the land underlying the NorthPoint neighborhood in East Cambridge. The city had first refusal on the Alewife parcels, and jumped on the purchase when it became possible, he said.

“This is such a critical link,” Rossi said. “It sets us up for the possibility of heading up to Porter Square and as a key link to some of the suburbs,” including Arlington via the Minuteman Bikeway and Belmont via the Alewife Greenway Extension – as well as joining with the 16-mile Charles River Link Trail bike system. 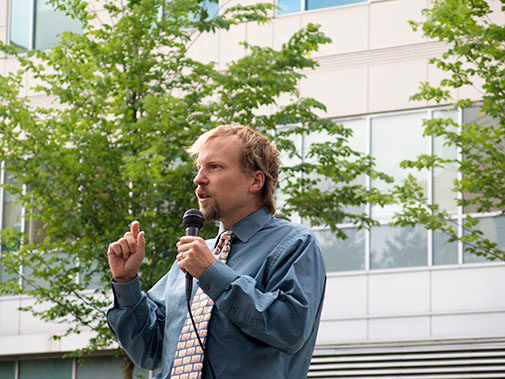 “Everyone has their own, regional concept of how these link together,” said Tom Evans, whose work as executive director of the Cambridge Redevelopment Authority helped bring about the Grand Junction Pathway segment now open in Kendall Square. He cited the “LandLine” plan of the Metropolitan Area Planning Council and “Emerald Network” project by Cambridge’s LivableStreets Alliance as two models seeking to form a network of trails as extensive as might be found in the Netherlands.

The Alewife Greenway also connects Cambridge and Somerville, a goal shared with the Grand Junction Path that will ultimately build a north-south connection from Boston at the Boston University Bridge to the planned extension of the Somerville Community Path, a part of the green line extension public transportation project near the Cambridge-Somerville line. “Probably the biggest issue among all this is the green line extension,” which has been threatened by funding overruns, Evans said. “A lot of people are championing it [in part] because it’s supposed to take a path from Davis Square all the way down to the Charles River. We’re working on a little chunk of it in Cambridge. NorthPoint is another linchpin to make sure these pathways work together.” 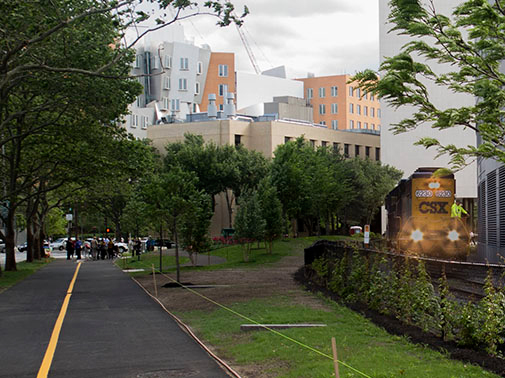 A CSX train passes the path along the Grand Junction railway
just minutes after the ribbon-cutting opens the path to pedestrians
and bicycles.

A June 9 ribbon-cutting at a Grand Junction segment in Kendall Square showed how a path and greenway works without interfering with trains, called “rail with trail” – part of the festivities was seeing a CSX train ride in beside the freshly paved path, where officials from the city and Cambridge Redevelopment Authority gathered with real estate workers, municipal transportation enthusiasts and curious residents.

The event officially opened for public use not just a 14-foot shared-use path between Main Street and Broadway along Galileo Galilei Way, but a public park with 35 new trees, rose gardens and Virginia Creeper that will eventually envelop the fence in a layer of green leaves; Adirondack chairs and tables, granite-block benches and bike racks; and a drinking fountain with a water bottle filler and dog bowl. Red granite laid in the ground outlines where Harvard Street once cut through the property. 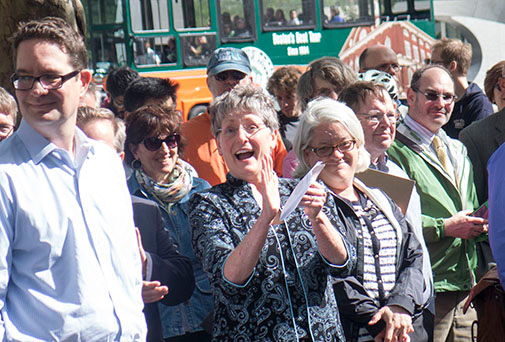 “We are excited to open CRA’s first significant public improvement in many years. We believe this park adds value to the heart of Kendall Square by beautifying and providing a unique and relaxing place in a forgotten corner of Kendall Square while accelerating the momentum to advance the larger Grand Junction Path, a significant city transportation priority,” said Kathy Born, chairwoman of the agency’s board, in a press release.

The agency said it contributed more than $300,000 and staff time to this project, and the Massachusetts Institute of Technology provided $500,000 toward design and construction. City councillor Tim Toomey, who lives in East Cambridge several blocks from Grand Junction tracks, has been a strong supporter of creating a mixed-use bike and pedestrian path in its right-of-way. Cambridge’s Community Development Department and Department of Public Works worked with the CRA on design. 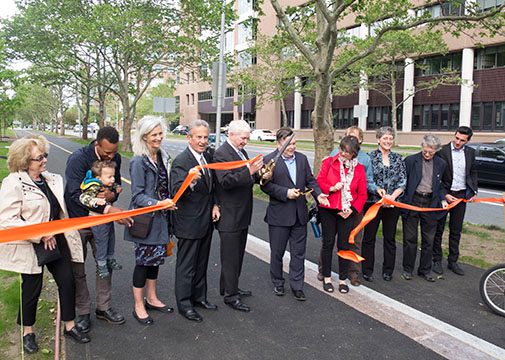 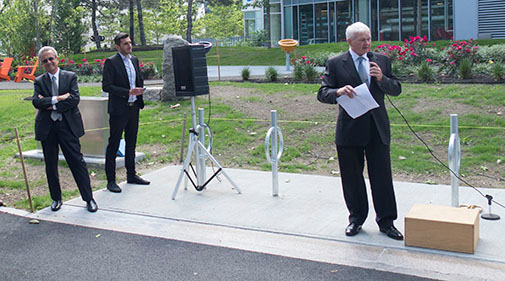 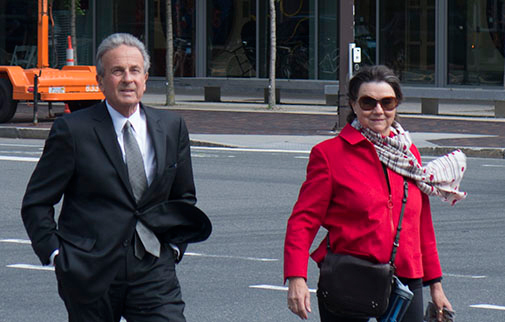