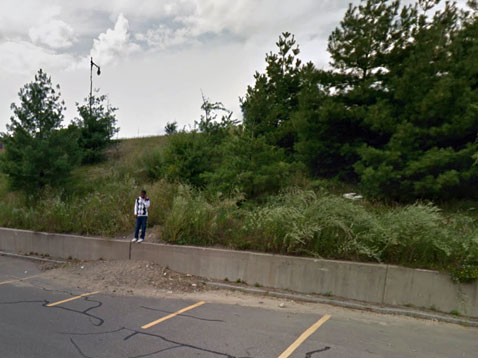 A pedestrian pauses at the base of the hill used to get between Alewife Brook Parkway and the Fresh Pond Mall parking lot. (Photo: Google)

The threat of a land taking at Fresh Pond Mall was raised Monday as a solution for the dangers of crossing a large, busy parking lot to get to public transportation. City officials said the lot owners have been unwilling to work with the city on making the trip safer.

“This is exactly the reason why eminent domain is legal … you use it for public safety and for organization of the city, and this is a classic example of that,” said city councillor Dennis Carlone, who is asking for action on the parking lot with councillor Marc McGovern. “Frankly, I think the city is liable if we don’t start acting on this.”

The order asks City Manager Richard C. Rossi to reach out to the mall owners to “strongly encourage them” to make a passage across the parking lot and to the state Department of Conservation and Recreation to make it easier for residents to climb a hill that is the fastest way to get to the Alewife station on the Massachusetts Bay Transit Authority’s red line.

New Street, by Danehy Park in Neighborhood Nine, is the site of significant development and population growth but dead-ends at the mall parking lot by Apple Cinemas. Heading west across the parking to get to the Alewife Brook Parkway, also known as Route 16, and the T means walking about a tenth of a mile among moving cars before facing a steep embankment to the street. Residents have tried to make the climb easier over the years by piling up shopping carts from mall stores as a kind of guerrilla landscaping.

The same route is used in reverse by pedestrians coming from the T to see a movie or shop at the mall’s stores, including Whole Foods and Staples.

“They’re going to cut through the shortest way, that’s what people do,” McGovern said. “It’s certainly not a safe pedestrian way, but it’s not a safe vehicular way either, in my opinion … it’s a really busy parking lot. They use so many of those spaces, especially down toward the Whole Foods end – they just seem to try to cram so many spots in that it’s difficult to drive through there, let alone to walk or bicycle.”

Vast Capital Management and Alewife Properties, businesses with offices at 545 Concord Ave., are making facade improvements for the businesses stretched along their mall – “long overdue,” Mayor David Maher said as an aside at the Monday council meeting – but the changes don’t affect the parking lot.

Maher said he hoped the city manager would be able to bring results with the family who has long owned the mall, as “every other” attempt over the years had found them “unwilling to put safer crossings in … but let’s try again. Maybe they’ve turned over a new leaf.”

Messages were left with Vast Capital Management and at the Belmont home of president Nigoghos Atinizian on Monday night.

This is the second time councillors have talked of eminent domain recently. Talk in May of a land taking at Vail Court, a deteriorating apartment complex near Central Square, brought an explanation for delay from an owner’s lawyer, if not action on the complex itself.

“I am completely for taking a roadway, if we can’t negotiate one, by eminent domain. It is clearly for public safety,” Carlone said.