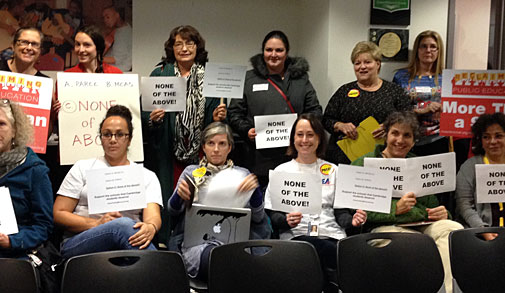 The School Committee voted 4-3 on Tuesday to switch to the PARCC test within three months, surprising many after a unanimous vote in May to halt its implementation and proceed “with a community-wide forum” that never took place “on the role and implementation of standardized testing.”

Of the members, only Patty Nolan spoke on the topic – in opposition. That brought a brief response by Superintendent Jeffrey Young and an immediate motion by member Kathleen Kelly to vote. Under committee rules, the vote has to be taken immediately.

Afterward, vice chairman Fred Fantini made a motion to ensure the vote couldn’t be reconsidered, and Nolan made the sole objection.

“I thought we had settled it in June 2014,” Nolan said in her comments, noting that even before May there had been a committee vote supporting Young’s own recommendation that Cambridge use the existing MCAS standardized test instead of PARCC for the current year. At the time, Young cited staff and parent objections to the new test, which included the need to buy and train on new technology, reported technical difficulties with software, the fact the tests were timed and had open-ended questions and scoring many teachers found wanting, as well as content level many found too high-level for younger grades. He also cited then-Cambridge Education Association president Chris Colbath-Hess’ complaint of too many “assessments and initiatives.”

Current president Terry Gist reminded the committee in public comment of two staff petitions with “hundreds of signatures” presented in May with deep concerns about standardized testing, data collection and the overload of initiatives. On Friday, she said she was “surprised, disappointed and stunned” by the vote.

“The superintendent never spoke to me about any of this at all. I was not informed. I learned about it on Dec. 10,” she said, acknowledging that a letter was sent to staff seeking input – the day after Young made his recommendation known.

Many of the two dozen teachers attending the Tuesday meeting wore stickers and held signs saying: “None of the Above.”

“This year two initiatives that have come down the pipeline are family engagement and cultural proficiency. Where has the family engagement been for this monumental decision?” said seventh-grade Cambridge Street Upper School teacher Betsy Preval to applause. “Why is Cambridge in such a rush to administer PARCC, a faulty assessment where there is still much debate about its developmental appropriateness? The idea that these exams could be administered a few months from now is ludicrous.”

Many of the teachers attending the Tuesday meeting of the School Committee protested a switch to the national PARCC test. (Photo: Jean Cummings)

The state Department of Education announced Nov. 17 that starting in spring of 2017, Massachusetts would use a PARCC hybrid “MCAS 2.0” upgrade of its own standardized test used since 1993 instead of the pure version developed and administered through a national group called the PARCC Consortium. The “Partnership for Assessment of Readiness for College and Careers” and its “Common Core” set of standards have been controversial nationwide, although about half of Massachusetts districts opted to test it last spring; Cambridge chose to stick to the state’s test.

Districts were given a choice of which to use next spring. Today was the deadline to decide.

By way of explaining why this recommendation came as a surprise to so many, Young noted that the committee meeting between the state announcement and deadline was Dec. 1. “I think everyone will remember we were in the middle of a very difficult and distracting time,” he said, referring to a series of bomb and gun scares, “and just did not get that onto our agenda on Dec. 1. Perhaps we should have, but we didn’t. I’ll own that part of it.”

In his recommendation to the committee to switch, Young included a message to superintendents from state Education Commissioner Mitchell Chester, some of which said:

I want to allay any concerns you might have about some recent stories in the media that inaccurately described Massachusetts “abandoning” the Common Core and PARCC. We have not abandoned either one … The board’s Nov. 17 vote also embraced PARCC as a major component as Massachusetts’ next-generation assessment, which will be administered starting in Spring 2017 … in short, if your district administered only MCAS in Spring 2015 and is now deciding whether to administer PARCC in grades 3-8 in Spring 2016, PARCC is the better choice, assuming your decision is based on which assessment will best provide your students, teachers and parents with a year’s head start on the instructional and student performance expectations that will be incorporated into the Commonwealth’s 2017 exam.

Young’s reasoning included the “opportunities” for students and staff to familiarize themselves with content and format and with the technological requirements arising from the need for students to take the PARCC on computers. The state is expected to convert fully to computer-based testing by spring 2019, Young said. It was reported that many districts using the assessment last spring encountered several types of technological problems – including insufficient computer access and Internet bandwidth, in some situations.

In addition, Young noted that districts choosing to stay with MCAS will “not be ‘held harmless’ in terms of 2016 school and district results.” If they use PARCC, though, test results worse than on the current year’s test won’t count; they can stay the same or improve, but they cannot do worse, and will retain their current standings. Use MCAS and perform worse than last year, and they can drop in standings.

The district is one step up after last year’s tests, to a Level 2 designation on a five-point scale on which 1 is the best. Three of the city’s 16 schools (the King Open and Kennedy Longfellow elementary schools, and Putnam Avenue Upper School) had one or more student subgroups in the lowest 20 percent and were designated as Level 3 schools. Young cited the new district designation as reason to opt for a test that will not jeopardize that standing – in other words, the PARCC.

In public comments, Paul Toner – a Cambridge parent, member of the state Board of Education, and former president of the Massachusetts Teachers Association – agreed. “I want my son in fifth grade to have the chance try these new assessments as soon as possible so that he and all CPS students are better prepared for the new test in 2017,” he said, also putting heavy weight on the attractiveness of being “held harmless.”

But several teachers took exception to the term, with Preval saying after Toner’s remarks that she found harm in a new, problematic test “setting our kids up for failure.” Graham & Parks School literacy coach Kathy Greeley said teachers were not opposed to assessments, but harm came to schools through “narrowing our curriculum so that students are spending less and less time in a creative, imaginative way.” Staff member Robin Lewis said her special-education students were having “the life sucked out of them by these tests … What will their adult lives be like if we have told them since third grade that they are failures?”

Erica Pastor, a Cambridge parent and teacher in Boston Public Schools, said she had just administered a practice test to get students ready for the PARCC and was dismayed by what she saw. Like others, she urged officials to fulfill the promise of community discussions about the best form of assessments.

When Young’s motion was brought forward, Nolan spoke at length, arguing that she didn’t see that much had changed since the previous vote. Because she, “my colleagues, and the teaching staff” had not been aware a switch was being considered until a few days before the meeting, she had assumed Cambridge would stay with MCAS. Noting that Arlington began a discussion in mid-November about which test to use, one of her concerns was the “lack of community [and] teacher involvement.”

While the revised state test won’t be MCAS, she said, “we also know for sure it won’t be PARCC.” She noted that the state had been developing an updated state test even before the national test came along, so she had presumed that the inclusion of PARCC-like elements and other modifications would be a sufficient transition. “Since our staff are asking us to stay with the test, there is no compelling reason I’ve heard so far to change midstream.”

“This is a great example of how reasonable and good people can just disagree,” Young said. “I’m not sure what’s right or what’s wrong or what’s good or what’s bad.” He explained that his position had changed since last year because “now we do know what to expect.” 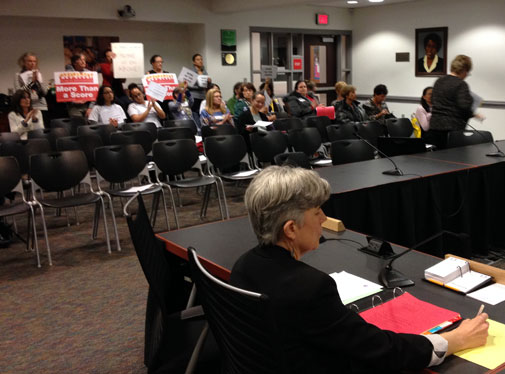 A vote Tuesday by School Committee member Kathleen Kelly surprised some who believed her to oppose the PARCC test. (Photo: Jean Cummings)

Reached afterward, Kelly said that it was a “quick” though “tough” decision for her, because “I’m not pro-PARCC.” But she said she was attracted by the idea of being “held harmless” for a year while getting practice on a style of test some saw as inevitable. “Let’s take the test and see how it goes,” she said.

Kelly also said that she “did not know that the teachers did not know” about the decision until very recently, adding that she was writing a letter to the union to explain her position.

Asked why she moved to vote without discussion, she said she would reply at length in writing, but by the end of the business day Friday she had still had made no comment.

Kelly’s vote surprised some – not only because of the cut-off discussion, but because she co-sponsored a motion with Nolan last spring that became the base of the “Pause PARCC” motion the committee passed. The other original motion folded in was written by Cronin. A request for comment by Cronin was not returned. Likewise, Deputy Superintendent Carolyn Turk was not available to explain the process alerting principals and staff to Young’s recommendation.

Reached after the meeting, Fantini said his vote was based largely on his experience with the beginning of MCAS in the 1990s, when Cambridge schools resisted the testing and it affected district scores for years. He felt it put the district in a bad light locally and nationally, and left the district far behind in scrambling to catch up to test requirements. “I do support teachers, but my lessons learned,” he said, “is that I don’t want to make the same mistakes.” He also expressed concern that the MCAS does not meet required standards.

Fantini said Thursday that individual schools will be making their own decisions whether to take the spring test with “pencil and paper” or on computers. “My guess is that most schools will choose to go to paper and pencil,” he said, so the test will feel much like the MCAS, causing less student stress.

Young, though, said one of his reasons for recommending PARCC was the opportunity to experience the technology, a notion also cited by Kelly in her conversation.

The last hour of the meeting was taken up by farewells to three departing members: Cronin, Osborne and Maher, who leads the committee by virtue of being chosen as mayor by his City Council colleagues. (One of the only public comments unrelated to PARCC was from parent Nancy Weiss, who gave heartfelt accolades to Alanna Mallon, Maher’s education liaison, for her “dedication” to the students of Cambridge, particularly through her leadership on a Weekend Backpack Program for children facing hunger and for piloting a Kennedy Longfellow School-based food pantry.)

In closing, Maher spoke warmly about the “privilege” of serving so many years with the committee. “In my 24 years of public service in Cambridge,” he said, “some of the work I’m most proud of is on the education side.” Comparing it to the vast work of the council, he said, “the impact you are having on a day-to-day basis is greater. That is something to take seriously and something to get right.”