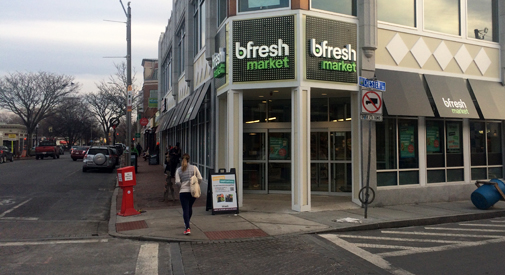 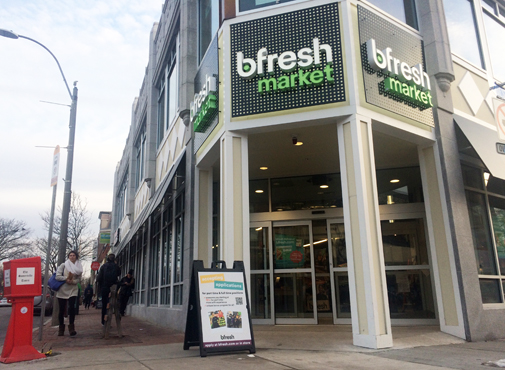 A bfresh grocery store is being prepared for opening at 244 Elm St., in Somerville’s Davis Square. (Photos: Marc Levy)

The bfresh grocery store that’s leasing space in a long-empty building in the heart of Davis Square is tentatively scheduled to open Feb. 24, and its success could mean an expansion of the concept throughout the region, company officials said Friday.

“They are very anxious to open,” said Saskia de Jongh, the marketing, format and store development lead for parent company Ahold, which also owns the Stop & Shop grocery chain. “But the [Feb. 24] date is very tentative.”

The ground-level store at 244 Elm St., undergoing renovations since the building’s facade began crumbling dangerously in June 2015, will share in-store dining space with a returning Dunkin’ Donuts, which could open on the same date after giving up its space at Elm and Chester Street to make way for the bfresh entrance. Co-working, virtual office and meeting space run by the company Regus will take over the second floor. 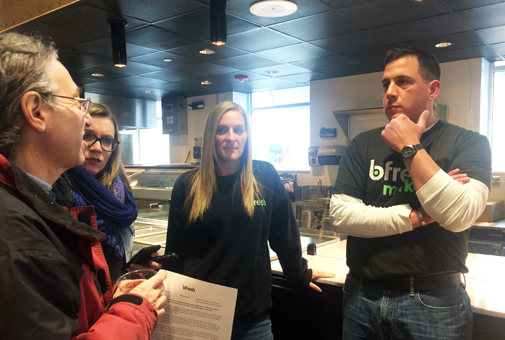 “We know this is a vibrant, exciting area … and we really feel this is the perfect location for us to test our concept,” de Jongh said, beginning a tour for local media and economic development officials as workers began stocking shelves for the first time.

Ahold made a “substantial investment” in bfresh, de Jongh said, declining to name a specific price to transform the former Social Security office space, empty since August 2010, into a gleaming, modern grocery store with everything from an olive bar, bulk food bins and nut grinder for fresh nut butters to grab-and-go sandwiches (egg salad, prosciutto and fig), soups and salads (quinoa Brussels sprouts, Asian soba noodles with shrimp), smoothies and juices (“Beet Fresh,” “Orange You Healthy”) a standard set of shelved and frozen foods (including Stop & Shop store brands), as well as a front-of-store produce section intended to have a “wow factor” with its colors and selection.

There are bfresh stores in Allston and Brighton “built to be labs where we could test the concept in a live environment,” said Marc Marrocco, real estate lead for the the concept, but this 11,000-square-foot store will be the hub where products such as pastry and entrees are made by in-store chefs before being driven across the river. Though Davis Square real estate isn’t cheap – the store has a 10-year lease on Elm Street – the plan is to keep prices low through logistics, he said. Shoppers can expect prices around the level of a Stop & Shop if not of a Trader Joe’s (“but at Trader Joe’s you can’t Cheerios”).

“We really want to be your neighborhood’s grocery store,” de Jongh said. “We want to be affordable. We know there are some very expensive stores here that might be costing you a lot, and affordability is very, very key to what we’re going to do.” 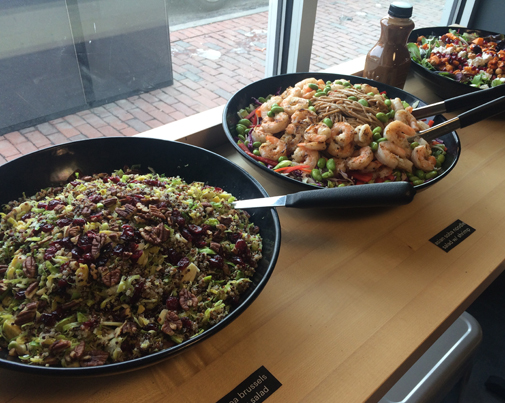 Store salads and other to-go foods are made available for sampling during a store tour.

The suggestion was that bfresh would beat the prices of Pemberton Farms on Massachusetts Avenue, which has off-street parking, and the gourmet Dave’s Fresh Pasta on the outskirts of Davis toward Teele Square. Still, deJongh dismissed the idea of opening a store in neighboring Porter Square, where there is a vacant two-story, 13,237-square-foot former Walgreens and a 9,900-square-foot former City Sports space available, because major competition from a Star Market is too close.

The Davis Square bfresh will also have sushi, prepared by employees of a third-party company, and everything from the sushi to the salad bar is to be available from the store’s 7 a.m. opening to its 10 p.m. close, Marrocco said. “The customer base we’re really targeting, the young professional – not that we’re excluding anybody – have odd shopping hours. They work 9 to 5 and are coming in at later hours,” he said. “If you don’t have products available to them, they’re not going to come back.”

In other nods to a younger, tech-savvy customer base, there will be self-checkout kiosks as well as staffed checkout lanes, as well as a mobile app using Apple Pay or traditional credit card options – customers will scan barcodes as they shop, pay with the app and leave as soon as a store worker confirms the bagged products jibe with an app-generated QR code. The store is focused on healthy and organic foods, and there’s a room mid-store that holds a “Digester,” which takes in up to 250 pounds of organic waste at a time and breaks it down into a liquid that simply drains away, limiting the amount of trash that must be hauled in a busy urban square. 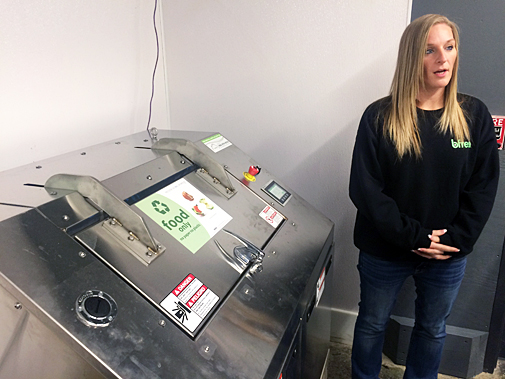 Brenson shows the store’s Digester, which breaks organic waste into a liquid that drains away.