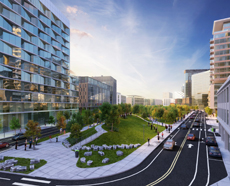 The City Council unanimously passed Monday an increase in the required affordable housing contribution from large developers. The increase was years in the making, with the council first starting down the path in 2013.

The new zoning also changes the computation from a percentage of unit count to a percentage of floor area. City planners said they hoped the change make more family-sized units available to the affordable-housing program.

The vote was straightforward and unaccompanied by last-minute amendments or change proposals that have so often plagued the Cambridge zoning process in the past. At 7:24 p.m., after laudatory speeches, all nine councillors voted in favor of the ordinance, with Mayor E. Denise Simmons emphasizing her vote: “Oh yes!”

“I really feel like we had near-supermajority consensus from day one,” councillor Nadeem Mazen said, noting how long the legislation had taken to come to a vote on the 20 percent figure even as residential projects got their construction permits.

During public comment before the vote, housing advocates praised the ordinance, but it seemed like a done deal – as indeed it was. They were overshadowed by speakers urging the council pass a resolution inviting the U.S. House of Representatives to impeach President Donald Trump.

Two weeks prior, the council took up the report of a Feb. 28 meeting of its ordinance committee, adopting many but not all of its recommendations.

Ellen Shachter, an attorney with Cambridge and Somerville Legal Services, had strongly campaigned to include a series of protections for low-income tenants in the ordinance. But at the March 20 council meeting, Shachter reversed her position, saying she had agreed to withdraw the amendments from the ordinance after talking with councillors who’d consulted with the city’s Law Department.

Shachter asked the council to ensure the protections are enacted in regulation, or, if that were ultimately deemed too risky, to come up with a dedicated fund to help tenants in crisis.

The council also modified the ordinance’s language about Planned Unit Developments, large multi-building developments such as NorthPoint. The original zoning ordinance was silent on the issue, but city staff had recommended exempting existing PUDs from the new requirement if they sought changes that did not decrease residential area or increase commercial area; normally, seeking any amendment to development plans would trigger new zoning requirements under state law.

After removing the PUD provision, a watered-down version was re-inserted into the zoning ordinance March 20: Amendments that “relate” to street layout directly resulting from changes in “state-controlled infrastructure projects” are now exempt from increased inclusionary requirements.

The final language appears to be intended to allow, for example, the NorthPoint developers to modify that project in response to changes in the green line extension.

But the language also comes without the protections that were originally included requiring that amendments not decrease residential space and not increase commercial space. It appears that an amendment “related” to an infrastructure project change could make unrelated project changes to increase commercial area or decrease residential area without being subject to the new inclusionary rates.

Assistant City Manager for Community Development Iram Farooq did not respond to repeated questions about this provision over the past two weeks.