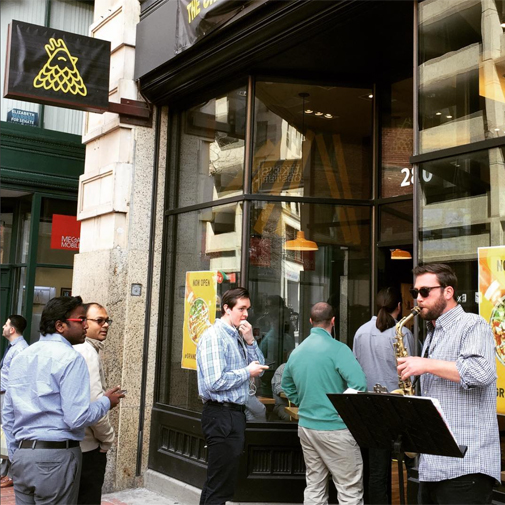 Chicken & Rice Guys’ four restaurants have reopened after the Middle Eastern-themed lunch and dinner business was linked to an outbreak of E. coli infections, but the company’s four food trucks and one pop-up eatery remain shuttered. The food trucks served customers at three locations in Cambridge.

All outlets shut down April 11 after state and Boston health officials reported that nine people diagnosed with E. coli said they had eaten at a Chicken & Rice food truck or the Allston restaurant. Subsequently, five more cases were linked to Chicken & Rice Guys. One person who became ill lived in Cambridge and ate at one of the company’s food trucks, the Cambridge Public Health Department said.

Most people have harmless E. coli bacteria in their gastrointestinal systems, which help digest food. The type that sickened people in the outbreak linked to Chicken & Rice Guys, E. coli 0157:H7, produces a powerful toxin that can cause severe cramps and bloody diarrhea. In rare cases it leads to hemolytic uremic syndrome, which may destroy red blood cells and damage kidneys, according to public health officials. Ten of the customers who became ill were admitted to hospitals, but none reportedly developed the syndrome.

State health officials are also awaiting test results that would confirm that all 14 people who became ill after eating at Chicken & Rice Guys have the same bacteria, Cabrera said; investigators can determine that by examining the genetic footprint of the organisms.

Nine of the 14 reported eating at a food truck; two at the Allston restaurant; one at the pop-up at Prudential Center; and two at an unknown location, Vivas said.

The cause of the infections hasn’t been determined, Cabrera and Vivas said. “It’s very difficult to say because so many parties are involved,” Vivas said, referring to food preparation and service.

The Boston Inspectional Services Department allowed the restaurants to reopen Monday after the company “cleaned and sanitized them from top to bottom,” committed to food safety practices, and the restaurants passed inspections, department representative Lisa Timberlake said. To put the food trucks back on the street, the company must request a hearing, comply with requirements set by the department and pass an inspection, she said. Chicken & Rice Guys had not requested a hearing as of Wednesday, Timberlake said.