Officials volley over bicycle safety lanes, with safety needs vs. budget and process

Officials volley over bicycle safety lanes, with safety needs vs. budget and process 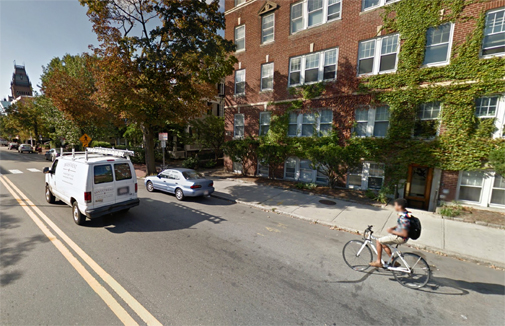 The city is looking at adding a separated bicycle lane on Cambridge Street between Inman Square and Quincy Street. (Image: Google)

The spring should see two stretches of separated bicycle lanes added to some of the city’s busiest streets – on Massachusetts Avenue from Trowbridge Street to Quincy, and on Cambridge Street from Quincy Street all the way to Inman Square – and city officials say preliminary budgeting raises the next fiscal year’s street budget by $1 million, called a 25 percent increase from the current year.

The Cambridge Street lane could be particularly crucial, as it leads past the high school and Main Library.

But installation of the lanes is identified only as “beginning” in the spring in a memo shared Monday with the City Council, and the improvements are only part of a five-year plan that is otherwise unbudgeted, thrust into action in part by a pair of summertime bicyclist deaths that has left elected officials and residents racing ahead of the capacity described by the city manager and his staff.

More than a dozen residents and bike advocates called for speedy safety improvements to transportation infrastructure during public comment Monday, and six city councillors had their own calls for urgency, starting with Craig Kelley – an avid rider who sends out weekly updates to constituents on bike issues before the council – raising the issue to city staff with some gentleness: “Things still seem to be moving slowly.”

Councillor Leland Cheung called this “the same conversation as when I joined the City Council eight years ago” and blamed the city’s tendency toward “paralysis by analysis,” in which a call for a long-term study was followed by acceptance of a report and, eventually, a call for another long-term study.

Councillors Dennis Carlone, Nadeem Mazen and Jan Devereux all encouraged more and faster action, with Devereux asking for a special emphasis on finishing the Cambridge Street lane for the safety of high schoolers. Vice mayor Marc McGovern reminded city planners that “the timeline in the eyes of the city isn’t always in sync in the eyes of its residents. A five-year plan for the city is actually relatively quick for certain changes; five years in the eye of a resident – ask anybody dealing with the sewer separation project – is an eternity.”

The meeting was a volley, though, with the councillors on one side and a team of appointed officials on the other: City Manager Louis A. DePasquale, Director of Traffic, Parking & Transportation Joseph Barr, Assistant City Manager for Community Development Iram Farooq and Department of Public Works Commissioner Owen O’Riordan. Every time a councillor would urge more speed, a city staffer would respond with a municipal reality.

“I really think we are moving at a very reasonable pace,” DePasquale said, “and we will move forward with more detail as part of the budget.”

Part of the disconnect, the appointed officials said, was that two short stretches of separated bike lanes were put up in December on Massachusetts Avenue on blocks near Central Square and Harvard Law School, but those test lanes were undertaken without the usual public process. “When we get to Cambridge Street, we will start that process,” DePasquale said. “It’s important to let everybody have a voice. It can slow the process down, but you get the right outcome.”

The existing lanes have been largely complimented and uncontroversial, with minimal effect on parking thanks to their small size, but the Harvard Square lane will take away one lane now used by car traffic; the narrowness of Cambridge Street means that adding a separated bike lane will cost parking on one side of the street. Taking into account such things as bus stops and loading zones means the lane will have to be figured out block by block, the memo said.

“I suspect when we go out to have a conversation about Cambridge Street, we will find more divergent opinions,” Farooq said.

That calls for more outreach to stakeholder and for long-term feedback, which the memo describes in roughly eight steps (with one step including three community meetings). The initial list of stakeholders itself is 15 bullet points, calling for participation by everyone from the MBTA and the Massachusetts Bicycle Coalition to the high school, local retailers, Cambridge Hospital and the new Inman Square Neighborhood Association.

The Jan. 25 memo discussed Monday wasn’t even a specific response to a council order, DePasquale noted, calling it an example of city staff being “proactive” on the issue of bicycle safety. But that reassurance didn’t appear to have the desired effect.

“You said that the report was not a response to council orders,” McGovern said. “At some point, I’d like to see an update on where those orders sit and what’s going on with them.”