No questioning of Lanes and Games project coming from Arlington, planning head says 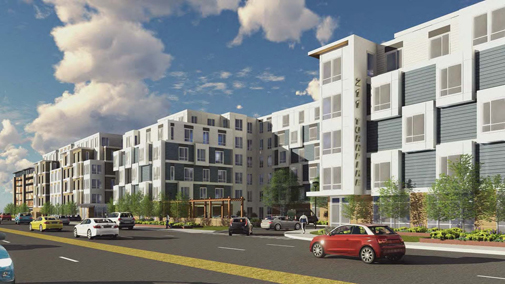 No questioning of Lanes and Games project coming from Arlington, planning head says

But issues such as flooding, traffic are eyed for regional discussion
By Marc Levy

An approved proposal for Route 2 would add 320 units in two six-story buildings.

Opponents of an apartment project planned for the site of Cambridge’s Route 2 Lanes & Games bowling alley and Gateway Inn motel went away disappointed Monday when the Arlington Redevelopment Board decided against weighing in against the proposal.

“They decided not to file any sort of appeal,” said Jennifer Raitt, director of Arlington’s Planning & Community Development Department. “The members didn’t feel there was any particular reason for review.”

The project, called The Residences at Alewife Station, would add 320 units in two six-story buildings to the fast-growing neighborhood. There would be just over 240 parking spaces. Cambridge’s Planning Board approved the plan 7-0 on April 4, leading concerned members of North Cambridge residents groups to pin their hopes on the neighboring town.

Traffic concerns, the presence of lead and asbestos at the 195-211 Concord Turnpike bowling alley and motel site, as well as a state rule prohibiting residential uses there since 1997, warranted further study for their effect on Arlingtonians, the town board was told by Madeleine Aster, a member of the Fresh Pond Residents Alliance and North Cambridge Stabilization Committee. Flooding has long been a concern in the area, though, and Rich McKinnon, a developer advising Criterion, said construction has been planned with flooding in mind.

The Arlington board went through the project “point by point” and determined its members were okay with the plan, which was allowed by Cambridge special permit, Raitt said Tuesday.

The deadline to appeal the project is May 23.

Instead, the board plans to continue to discuss issues of flooding, traffic and contaminated soil at future meetings in town as well as with officials in Cambridge and Belmont.

“It makes sense for Arlington to have a voice” in the process, Arlington Redevelopment Board member Andrew West said.

In the short term, Raitt told the board, she advises talking to Cambridge traffic and planning officials as well as asking Town Manager Adam Chapdelaine to seek a meeting involving the managers in Cambridge and Belmont.