Cafe Algiers, recently rescued from closing, is being forced out for restaurant by Scelfo 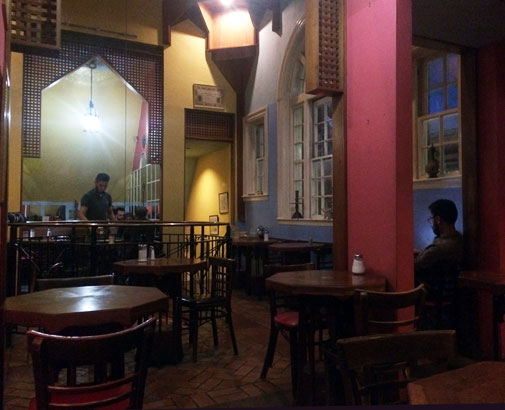 Cafe Algiers, recently rescued from closing, is being forced out for restaurant by Scelfo

Cafe Algiers is being forced out of its Harvard Square home less than a year after being saved from closing due to the owner’s illness. (Photo: Marc Levy)

It was less than eight months ago that Cafe Algiers’ abrupt closing was greeted with an uproar, and a little less than that when the news the cafe was saved was greeted with cries of relief. Now Algiers is at risk again, being pushed out by the building’s owner and another of his tenants: Michael Scelfo, the restaurateur behind the basement-space Alden & Harlow and the nearby Waypoint.

Scelfo plans to open his third Harvard Square location, an eatery called Longfellow, in the fall. Cafe Algiers would close permanently as of August.

It is not welcome news to the owner of Cafe Algiers.

“There’s no reason for this. We have a good business,” said Leo Diodato, who took over management of the cafe when Sami Herbawi, owner of Andala Coffee House in Central Square, rescued it from closing. “The landlord doesn’t want to renew our lease.”

Cafe Algiers, after some 45 years in business at 40 Brattle St., gave generations of Harvard Square diners a scare by shutting abruptly in October – announced in an Oct. 21 post on Facebook before a surprise reopening Nov. 5. The reason for the closing was the serious illness of owner Emile Durzi; the reason for the reopening was Herbawi.

He not only stepped in for his friend, now in a nursing home, but continued to send profits from the business to Durzi. That went on for months; a full transition of ownership was expected to be complete in the spring.

“When we reopened it, it was to keep Cafe Algiers going, it wasn’t so much to make money,” Diodato said Monday, as news broke that the eccentric, exotic two-story space would soon be hosting a different restaurant.

In a statement, Scelfo said he was “sad to see Emile and his team close their doors, but hope to pay homage to Algiers’ 57-year legacy with this new venture.” A message left with a publicist for Scelfo’s businesses was not returned.

A message was left Monday afternoon at the offices of the building owner, the Poorvu family.