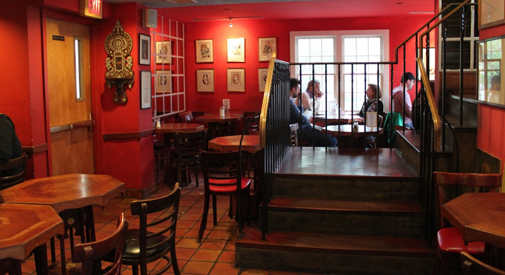 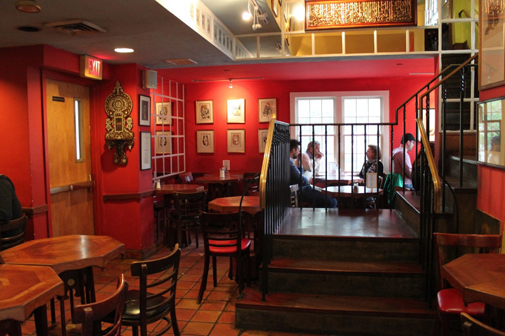 After some 45 years in business, Cafe Algiers is closing – another Harvard Square institution closing, this one atop the Brattle Theatre and Alden & Harlow, a restaurant that itself replaced the Casablanca restaurant after its own 57-year-run.

“Algiers will be closing after many years of business, many years of hard work and many stories,” the restaurant posted Friday night on its Facebook page. “Please keep all our cooks, waitresses, and managers in your thoughts – and think of us when you next drink mint tea.”

The phone at Cafe Algiers wasn’t picked up Sunday, which was to be its final day serving. At the restaurant, as customers buzzed around and went outside to take final photos, waitstaff said there was no one present who knew the cause of the closing, and that they had been told only two days earlier.

The restaurant began in the basement space of 40 Brattle St., in Brattle Hall, in the early 1970s, but owner Emile Durzi moved to its location at the top of the building – with a small patio for outside dining and a woodsy, mirrored atrium looking down on is first floor – in 1990. Generations of diners stopped in throughout the day for teas (including, of course, mint tea), flavored hot chocolate, shish kabobs, healthy green felafel and other foods, served by charming but sometimes indifferent servers.

As the café passed its 40th anniversary in 2012, the food website Glintwind asked “So how does an electrical engineer come to open a cafe?” and answered:

Durzi is originally from Palestine, and his family fled for Egypt when he was six. He has fond memories of being a child in Cairo, sent out early in the morning to buy bread from the baker down the street. He is an accomplished cook who occasionally disappears into Algiers’ kitchen to sauté a snack of water-soaked chick peas (with water and salt, for just the right amount of time) and who will share with a server a tea he’s brewed from orchid root. Particularly fond of sweets, he’s been known to raid chocolate left unguarded by waitstaff. But his reasons for opening a café were more practical than romantic. His older brother had arrived in the United States before he did and told him that businesses here operate on advertising and credit. Durzi wanted nothing to do with either (to this day Algiers does not advertise; nor, by the way, does it have a cash register), and he eventually thought that running a café might suit him. “And,” he said, “I wanted to have fun.”

Alia Rejeb Medeb, who runs the Baraka Cafe, reminisced Saturday about Durzi providing her with her first job after arriving from France at the age of 19 years old in September 1975.

“Emile gave me a job and a first home,” she said, calling the day a “Very sad end.”