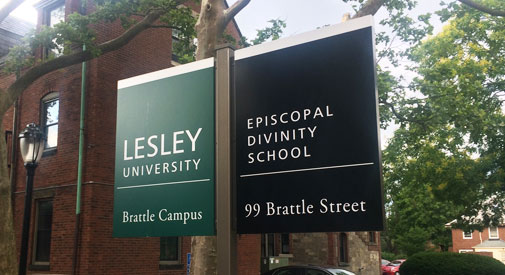 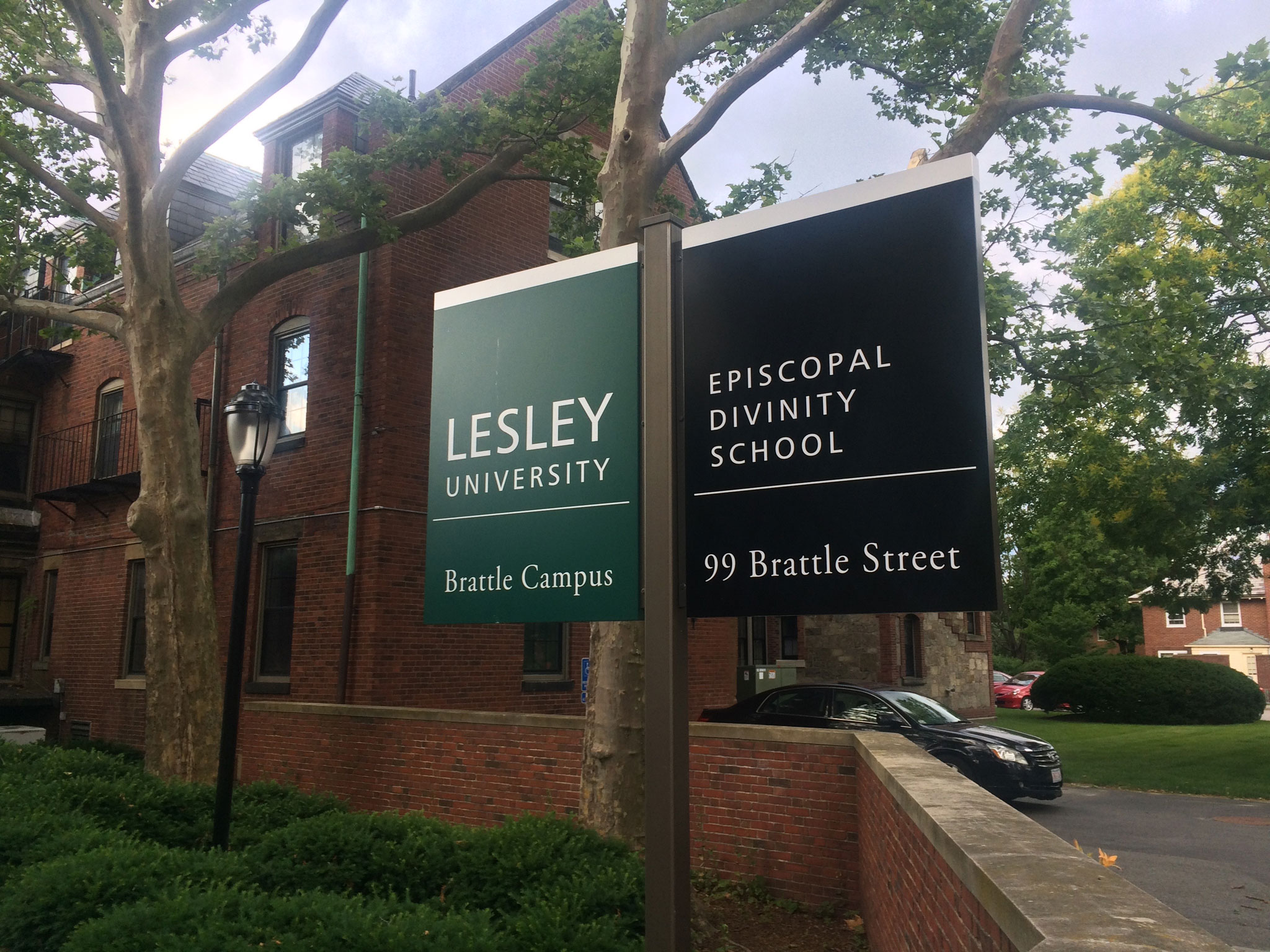 Signs around the eight-acre property at 99 Brattle St. make its ownership and use clear. (Photos: Marc Levy)

The prospect of putting affordable housing near Harvard Square on former divinity school land looks even more expensive, complicated and outright unlikely after an analysis by the current owners, despite a vote by city councillors in late June that went all-in on the prospect – to the extent that their order refused to contemplate another use for the land.

Lesley University’s Marylou Batt confirmed that her institution is in a decade-old condo agreement for half of the eight acres historically owned by the Episcopal Divinity School, which has shut down operations in Cambridge and will begin its next academic year in New York City. The school owns about 67 percent of the square feet in the “condo” portion of the land, where a new buyer would essentially be joining Lesley in a condo association and rely on its approval to get in. Though EDS owns several buildings on its own, the schools own all of the grounds together.

“We’ll have a say” who moves in, said Batt, Lesley’s vice president for administration, at the June 27 meeting of the Harvard Square Neighborhood Association. The meeting was held on the two schools’ shared campus.

“This is a very important part of our campus. No matter what, we don’t have an intention of leaving,” Batt said, noting that it also owns neighboring property bought from Boston College’s Weston Jesuit School of Theology, which is not part of a condo agreement and helps cement Lesley’s interest in the area. Some 200 Lesley students live on land shared with the divinity school. 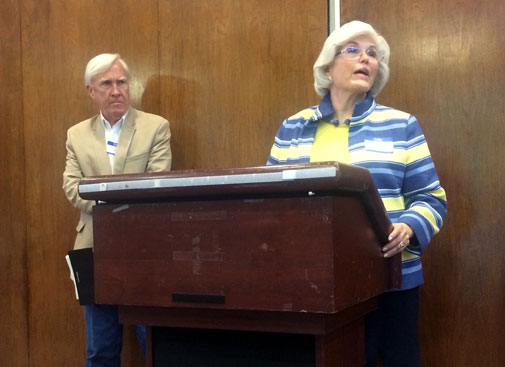 Lesley has the right of first refusal on property sold by the divinity school, which prefers that everything for sale be handled in a single purchase most likely by another institution, said J. Ralph Cole, a senior vice president at Leggat McCall Properties and a member of the divinity school’s board of trustees.

Though city government might rezone the property, Batt and neighborhood association leader Suzanne Blier, an architectural historian at Harvard, described a complicated set of restrictions. The divinity school has its own underlying zoning that specifies the EDS-owned homes are single-family only; is part of a historic district that says building facades can’t be changed; and has an underlying condominium land master deed that allows only a 5 percent increase in the size of existing buildings and restricts their use to educational, cultural, academic or religious. In addition, it’s possible a church on the property may be deeded to remain a church in perpetuity.

Cole could not address whether EDS, despite its mission, might sell below market rate for the right buyer; school documents show the sale is expected to pump up the school’s $53 million endowment by $25.5 million.

“In the end, qualified buyers are going to very few and far between. And they will be of a special breed,” Cole said. “We are looking at it as a single sale, [so] to start to cherrypick here and there is probably not the way we’re going to go.”

Cole affirmed later that an “institutional” buyer most likely meant another school; Harvard University’s director of government and community relations, Thomas Lucey, said Harvard has not expressed interest in the land.

By Cole’s estimation, the need for a property evaluation and writing of an offering memorandum will push a sale into the fourth quarter and “could easily slip into the first quarter of next year” and in these early stages, “let me stress, we are not in negotiation with any buyer.” Cole also stressed that the evaluation would be shared with Lesley for the sake of accuracy, “keeping our partnership ties very close.”

“We are interested, but we don’t have the biggest deep pockets, so we’ll have to see what the market looks like – and we have more interest in some buildings than others,” Batt said of Lesley, noting a desire to pick up the rest of the Sherrill Library now shared with the divinity school, and a lack of same in owning a church.

Order for housing only

The City Council had a sense of the difficulties surrounding the land before its June 26 vote – it was held by a week because the maker of the motion, Tim Toomey, wasn’t able to be present for debate the first week it was offered – but insisted 6-3 on keeping the order in a form all but impossible to achieve: It asks the city essentially to “immediately [contact] the Episcopal Divinity School and Lesley University to begin negotiations for the purchase of the eight-acre Episcopal Divinity School site for construction of critically needed affordable housing.”

Toomey’s original order didn’t mention Lesley, but councillor Jan Devereux noted that talking with the university, “a valued member of the community,” would be crucial. She also suggested broadening the language to consider other uses if affordable housing didn’t work out, but the suggestion was rejected by a majority of councillors. Toomey said looking at the property as anything but potential affordable housing is “just going to cloud the issue.” Mayor E. Denise Simmons agreed that “I am solely supportive of a policy order for housing. I don’t want to skew the intention of our city manager.”

If affordable housing doesn’t work out on the divinity school property, the council could make a new motion later to look at other uses, Simmons said.

The council has a single meeting during the summer, Aug. 7, and reconvenes for regular meetings starting Sept. 11.