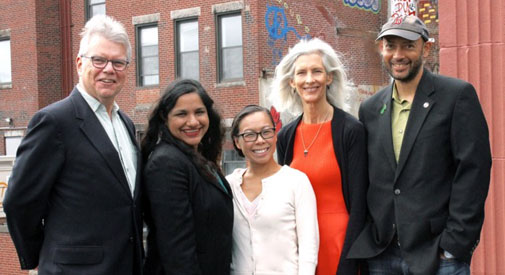 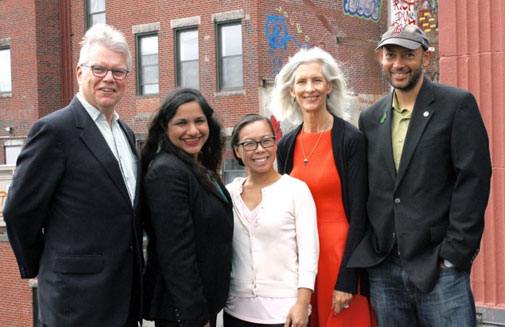 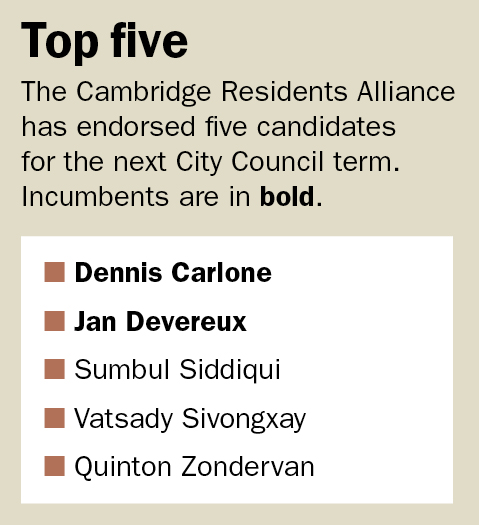 “The endorsed candidates seek bold change through policies and programs that create and preserve affordable housing, increase democratic participation in elections, improve equity and justice and enhance economic opportunity,” leaders Nancy Ryan and Lee Farris said in a press release. “They have demonstrated a commitment to a future city that prioritizes housing for low- and moderate-income people as well as environmental and traffic/transit policies that support the lives of a truly diverse and welcoming community.”

The endorsements were based on the recommendation of the group’s Election Committee, which looked at candidate answers to a questionnaire and essay question; an assessment of the viability of each campaign; and an estimation of whether the experience, community involvement and views of each candidate aligned with the platform of the Alliance, Ryan and Farris said. The group described itself as “committed to preserving and promoting a livable, affordable and diverse Cambridge community.”

Seventeen candidates out of 26 submitted responses to the questionnaire. Some candidates were asked to participate in an interview.

Each endorsed candidate has pledged to refuse campaign donations from large corporate or real estate interests seeking zoning changes or other benefits from the City Council or city boards. They do not constitute a slate, and therefore do not necessarily support one another. They are free to form their own slates, coalitions or alliances and receive endorsements from other groups, the Alliance said.

The group’s written explanation of its six endorsements, in alphabetical order and with light editing, are:

Dennis Carlone was first endorsed by the Alliance in 2013 and again in 2015. As an architect and urban designer who understood that Cambridge’s exponential growth required a master plan, he initiated, fought for and secured the comprehensive Envision Cambridge study now underway. He guided passage of the plastic bag ban and a 50 percent residential space requirement for new development in Central Square, and added dedicated affordable housing funding to the city budget. As co-chairman of the Ordinance Committee, he has worked with neighborhoods for human-scaled buildings and led the effort to increase a “linkage” requirement that must be paid by developers.

Jan Devereux was endorsed by the Alliance in her first run for office in 2015 based on her leadership of the Fresh Pond Residents Alliance. She understands the concrete impacts of climate change on the low-lying flood-prone neighborhoods of the city and is a safe-streets activist. She won implementation of the new citywide 20 percent affordable inclusionary housing policy and proposes that one-third of tax revenues from the Volpe development in Kendall Square go to affordable housing.

Sumbul Siddiqui is a native Cantabrigian and Cambridge Rindge and Latin School graduate who works as an attorney providing legal services to low-income communities. As an immigrant who grew up in public housing, she understands the importance of access to housing and jobs for vulnerable families trying to remain and thrive in the city. She proposes a new Office of Housing Stability to help individuals find and maintain housing in Cambridge, as well as scholarships and a local hiring program to help residents benefit from the innovation economy.

Vatsady Sivongxay is an attorney, community advocate and refugee immigrant who knows how to take problems to solutions through policy and community engagement development. Previously, she was director of public policy for the Boston City Council’s District 7. She supports stronger tenant protections, expansion of inclusionary zoning requirements for affordable housing for lower to middle-income households and increases in university housing. As a mother, she is passionate about maintaining healthy, connected neighborhoods that support families.

Quinton Zondervan is a bold business leader and environmental advocate who uses his technical and organizing skills to take action on climate change through local policies. He is president of Green Cambridge and co-author of the Net Zero Action Plan to reduce greenhouse gas emissions from buildings in Cambridge. He wants to increase housing opportunities by requiring universities that do commercial development to sharply increase on-campus graduate student housing.