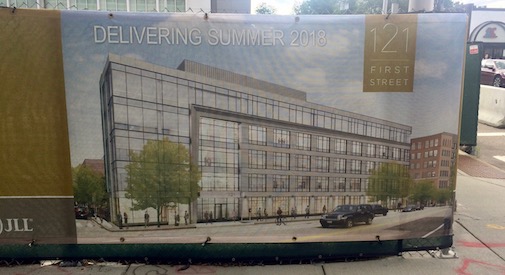 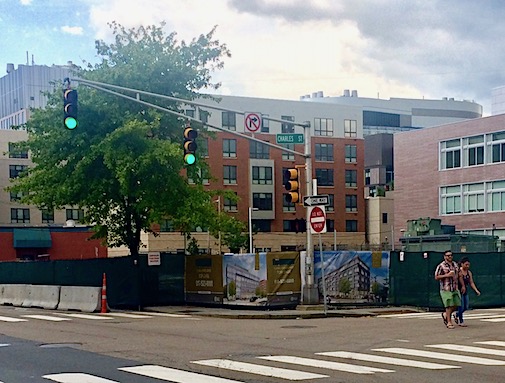 Construction at 121 First St. in East Cambridge, seen in July, is expected to among the first paying “linkage” fees to the city’s Affordable Housing Trust. (Photo: Marc Levy)

After nearly three decades between setting the “linkage” rate developers pay to help build affordable housing, city staff and officials are already preparing for the next potential increase in 2019.

“It seems to me we would want to continue to increase this. We haven’t seen any decrease in interest in development as a result of our increasing it,” city councillor Jan Devereux said last week. “It seems logical that we would be talking about increasing.”

The linkage fee, also called incentive zoning, was set 29 years ago at $3.28 per square foot to help offset the effect of commercial construction that might displace Cambridge residents. The rate was supposed to be revisited every three years, but the city failed to act. When the council got a 2002 study that suggested raising the rate to $7.83, it never got out of committee.

A unanimous vote of nine city councillors in September 2015 set the new rate at $12 per square foot, an increase of more than 2.5 times but less than half the “maximum determined housing contribution rate” of $24.30 per square foot described in a so-called nexus rate-setting study. Councillors hesitated to go higher for fear of chilling development.

Because linkage fees are paid just before the city issues a certificate of occupancy and a building opens its doors, no money has come in since the rate was reset. But the first two projects expected to be done under the new fees – one at 121 First St. in East Cambridge and one in the NorthPoint neighborhood – are expected to bring the Affordable Housing Trust close to $5.5 million, said Iram Farooq, assistant city manager for community development.

That’s near the approximately $6 million generated by the fee between adoption in 1988 and the reset in 2015, with much more coming.

“A significant pipeline of incentive projects is underway,” Farooq said in a Dec. 5 memo to the council, including more work on First Street and in NorthPoint as well as at 399 Binney St., 35 Cambridgepark Drive and 145 Broadway. The first payments are expected in the 2019 fiscal year, which begins a little over six months from now, and some in fiscal year 2020.

The 2015 reset was for three years, rising each of those years by a dollar and to reflect increases in the consumer price index. It stands now at $14.95, and gets one more dollar bump in September.

With money starting to flow from linkage fees, the Affordable Housing Trust can start to put together a five-year capital plan, City Manager Louis A. DePasquale said.

“When we first looked at the plan it was a little frightening, because we were in the red,” DePasquale told councillors Monday. “Now we’re starting to put these numbers in. We’re just starting to talk about it, but I agree that once we can get a little better set of numbers – I think we’re close – we’re happy to go over it with you.”

It will incorporate what “we feel will be coming in and shows you the impact it’s had on the affordable housing budget, because it is substantial and something that you can all be very proud of,” DePasquale said.

The size of construction triggering the fee stayed at the same 30,000 square feet first set in 1988, but whereas that zoning applied only for construction needing a special permit, now it affects even projects built as of right; and while it used to apply only to office, retail and “non-commercial research” land uses, the new zoning adds hotels and motels, non-public uses such as universities, health care and social services, industrial uses and radio and television stations.