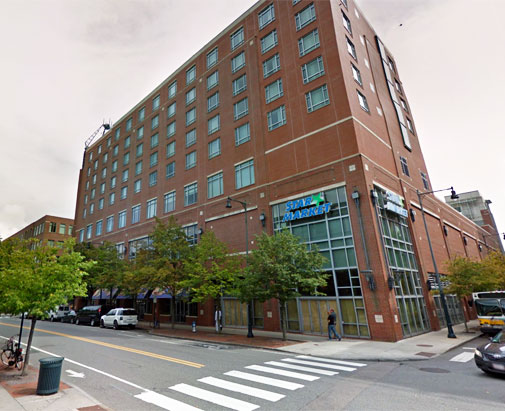 Star Market is in a 50,000-square-foot space on the second story of a building at 20 Sidney St., near Central Square. (Photo: Google)

With the Star Market near Central Square set to close Feb. 3, city councillors promised Monday to pressure its landlords in University Park to honor what they believed to be a decades-old agreement to host a grocery store.

“Because this was promised many years ago, it doesn’t mean for certain that they have to be held to that in perpetuity. But by the same token, the city isn’t taking back the decisions made 20 years ago to give them curb cuts,” said Marc McGovern, running his first regular council meeting since being elected mayor Jan. 1. “I do think we need to hold them to getting a market of some type [back] in there.”

A community meeting with the developer and property manager is in the works, and residents in the communities surrounding the 20 Sidney St. store will be invited, he said.

Star Market has been in the 50,000-square-foot second-floor retail space in University Park, one block off Massachusetts Avenue, since 1998, but a spokeswoman said last week that the “underperforming store” would close. The space is leased and managed by developer Forest City Boston for the property owner, the Massachusetts Institute of Technology. They needed dispensation from the city to build, in return for which community benefits were offered.

Proposals for University Park once included a four-screen cinema as well as a grocery store and hotel, but the movie theater never made it into the 27-acre property of research labs, office buildings and residences that Forest City began building in 1983.

But Dennis Carlone, a city councillor with a career in architecture and urban planning, said he wasn’t certain a grocery store was named as a requirement in Forest City’s special permit.

Though the Star Market has been criticized by many as run-down, neglected, pricey and shoddily stocked in recent years, councillors also called it important for the area – not just the closest store for the MIT community but an important resource for people in the Cambridgeport, Port and Riverside neighborhoods. Those areas have “a higher concentration of people who don’t have cars,” councillor Alanna Mallon said at her first meeting as a councillor, noting the grocery industry ideal of placing a store within a half-mile’s walk of shoppers.

But the competition has grown in recent years and the population of shoppers has not, and grocery store operators tend to operate on thin profit margins of about 2 percent, said Carlone, who said he has worked with Star, Market Basket and Stop & Shop.

That might make the tucked-away location, especially the unusual second-story placement, problematic for the grocery chains that residents have suggested recruiting to replace Star at the site.

“It’s not a ideal location, even for a high-end store, so it’s going to be difficult to get someone back,” Carlone said.

McGovern pointed to some pluses for the site: ample parking at a University Park garage; and the start of construction on the 283-unit Mass+Main tower and approval of new zoning for Central Square, suggesting more shoppers are on the way. A store that advertised better to the surrounding community could be a success, he said, especially given the talk that redevelopment might close Cambridgeport’s Trader Joe’s store at 748 Memorial Drive.

Other councillors proposed alternatives to a direct replacement for Star.

“I do agree that the developer has a responsibility to replace it, [but] a different location within the area might make sense,” Carlone said.

Complicating factors such as pricey rents suggested a look for more creative alternatives, such as a farmers market, new councillor Quinton Zondervan said: “There are other ways to address this issue of providing food retail beside just the supermarket model. It just may not be economically viable at that location.”

Vice mayor Jan Devereux felt more strongly that the space should remain a food outlet. But if the second-story space wasn’t cheaper than prime, ground-floor space, a subsidy of some sort might be explored – or a new grocer might take up less space than Star, she said.

The leasing manager for University Park, Jay Kiely, said Forest City Boston plans to gut the space Star will vacate in February, which could make way for the smaller store Devereux envisioned, McGovern said. (Kiely is also on the board of the Central Square Business Association.)

The motion sparking the conversation, filed by councillor E. Denise Simmons, asks the City Manager’s Office to reach out to supermarkets such as Market Basket to gauge interest in taking over 20 Sidney St. It passed.

“It’s imperative that we make a very strong and, to the degree possible, united stand about getting an affordable grocery store,” Simmons said.