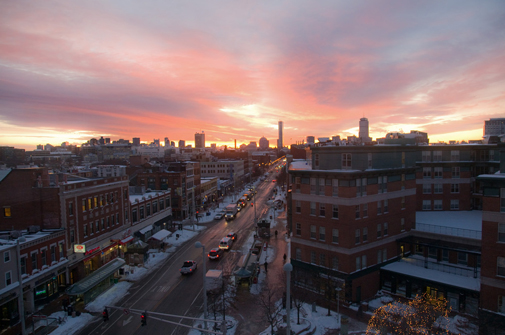 The sun rises over Central Square, where zoning changes may lead to higher buildings along Massachusetts Avenue. (Photo: Eric Kilby)

Even before zoning changes to Central Square were enacted Monday, they began flexing to leap down Massachusetts Avenue to Harvard Square and potentially elsewhere in the city – namely a provision that could encourage adding rooftop decks to buildings.

A rooftop deck is part of a proposal for a mixed-use project in Harvard Square by the developer Equity One.

Concerns about starting a process for rooftop decks even before Central Square had a chance to see how they worked out were heard from residents and city councillor Jan Devereux, but ultimately the idea was moved to the council’s Ordinance Committee for exploration. One potential wrinkle for the rule is the perception it would be pioneered by an unpopular Harvard Square project called The Collection at Harvard Square, in which developer Equity One would build a massive retail and office complex with a fourth-floor roof deck, possibly for a restaurant; during public comment Monday, resident Marilee Meyer dismissed the deck and project below together as “the potential Assembly Square malling of Harvard Square.”

In Central Square, though, the rooftop decks have been pursued avidly by a neighborhood coalition as part of the Central Square Restoration Zoning Petition, crafted by them in August and introduced to the council in September a way to “unlock the potential of Central Square” after decades of development stagnation and years of study with no end result.

In addition to no longer counting rooftop space (including staircase head houses) against how much a property owner can build, the new zoning does the same for residential balconies, a change that, in the words of the petitioners, stops forcing developers “to decide between creating usable space and balconies that might otherwise enhance the livable conditions of a building.” In general, the zoning increases the “floor area ratio” available to a property owner, which is aimed at creating more housing and mixed-use buildings. As a result, the square is expected to see more two- or three-story buildings eventually be converted to buildings as high as six or seven stories.

Small businesses – literally smaller than 1,500 feet – are excluded the same way, which would encourage developers to include them in their buildings. Controls for “formula businesses,” meaning mainly franchises that follow the branding of corporate chains, replace decades-old limits on “fast food,” which have become so restrictive they’re blocking businesses residents would prefer to see allowed. Banks and other financial institutions are specifically limited in terms of how much building frontage they can occupy on a block, while the zoning allows businesses such as nightclubs more freedom to spread throughout the square if the Planning Board “finds that such location will not adversely impact adjacent residential uses”; in most parts of Central Square, it’s required that they have entrances on Massachusetts Avenue.

There are also changes to how much parking needs to accompany property in the square, with exemptions for structures built before 1940 and an option to provide less parking in exchange for paying into a Central Square Improvement Fund, which will be set up by the city and administered by the Central Square Advisory Committee.

Resident and elected officials were surprised Monday to see zoning language by city planners that applied changes to residential areas of the square, contrary to what had been asked in past meetings, though councillor Dennis Carlone said it could have been a mistake brought on by last-minute requests.

“My sense is that a lot of people agree [many of the changes] were really meant for the dense business district,” Carlone told city planners Monday.

But Iram Farooq, assistant city manager for community development, suggested the inclusion hadn’t been so much a mistake as an opportunity for the City Council to define its intentions.

“We think this is a policy choice for the council, and if the council would like to narrow these exemptions to the business district, we’re happy to help formulate the language,” Farooq said.

The idea was to have a buffer zone between residential areas and development certain to come to the heart of Central Square, Carlone affirmed. “What that really comes down to is: Let’s try this in the main district, and then we can look if there should be modifications,” he said. “It’s a change, it’s a significant change.”

But the unanimity in Central Square for zoning including the roof deck option didn’t make the idea universally popular. “What goes on in Central Square may not be good for Harvard Square,” Myer said. “During the summer, I will tell you, balconies and roof decks I hear a half-mile away. Be careful what you wish for.”

Vice mayor Marc McGovern, a Central Square resident, said there were tradeoffs to living in a city. “We hear that a lot – too many lights, too much noise. But [these are] parts of the city where you can have that stuff,” he said.