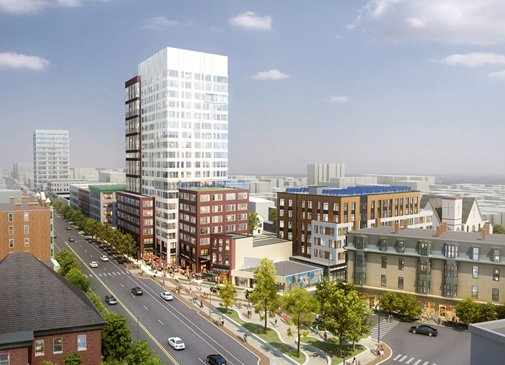 A settlement between the Massasoit Elks Lodge and developer Twining Properties will allow its Mass+Main project – and its 283 units of housing – to go forward in Central Square, a Twining executive said Monday.

“We are pleased to say we have reached an agreement,” said Bob Flack, a senior vice president at Twining, at a City Council meeting. “They have withdrawn their challenge.”

Mass+Main, including ground-floor retail and a 195-foot residential tower over Jill Brown-Rhone Park where 20 percent of units have been set aside for affordable housing, has been working its way through city approvals for more than four years. A petition aimed at shrinking the project showed up in January, presented by School Committee member Richard Harding and former city councillor and mayor Kenneth E. Reeves.

Called the Harding petition, it sought to reduce the project’s height to 150 feet and increase its affordable housing requirement to 25 percent. Twining executive Mark Barer said at at the time that if the petition passed, it would “kill the project and leave the existing landscape in place for years to come. For us, this is not a discussion about less height or more affordable units. This is a discussion about the fate of the project.”

But over several weeks leading up to the Monday announcement, Twining and leaders at the Elks Lodge met met for negotiations, finally settling Friday on a deal satisfactory to the neighbors to help pay for improvements to the Elks’ building that will “enable them to continue to serve the community.”

“The Elks Lodge is an important Central Square neighbor and Twining is proud to have earned their support for the Mass+Main development, which is scheduled to break ground this summer,” Flack said in a statement.

The Planning Board had already rejected the Harding petition 5-0 after considering it in March.

Details of the settlement were not available from Twining, and Reeves had no information on it beyond saying he continued to oppose the scale of the project. An email to Harding seeking comment was sent Tuesday.

The settlement allows Mass+Main to go through as planned, Twining said. Mass+Main apartments are estimated to be ready for move-in during the fall of 2019.