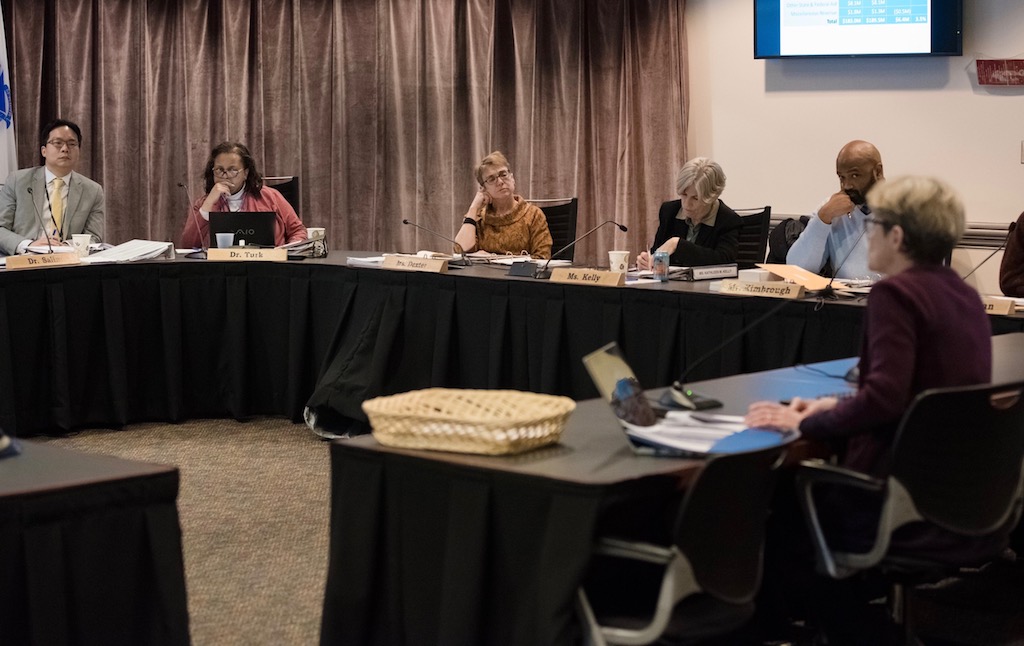 System at CRLS was surprise to committee members, students alike
By Jean Cummings

The policy of reducing high school students’ final grades to punish absenteeism was suspended by a School Committee vote Tuesday.

With the filing of first-semester grades for high school students just seven days away, members agreed to remove the penalty temporarily for this semester and charge the administrations of Cambridge Rindge and Latin School, the district and the committee itself to work with students to develop a replacement policy.

The vote on a motion filed by members Emily Dexter and Laurance Kimbrough pauses a 4.5-year rule of docking students’ final grades anywhere from half a letter grade to failing them.

The uncharacteristic agreement to make the last-minute policy change came after substantive discussion as each member, non-voting student members Paul Sullivan and Juliette Low Fleury, Superintendent Kenneth Salim and Deputy Superintendent Carolyn Turk chimed in with sometimes competing concerns. It hadn’t been clear the committee would vote, let alone unanimously. Member Fred Fantini even threatened late in the deliberations to “charter” the issue until a future meeting, but ultimately deferred to student member Fleury.

The issues deliberated included punctuality, equity, social justice, the role of punishment, the ability of teachers to create classes students won’t want to miss, poverty, public transportation, communication, supporting students, microaggressions, life lessons and the dangers of unintended consequences. In the end, because members objected to any grade reduction as a penalty for absences, disapproved of a policy that punished students inequitably or balked at implementing a recently revised policy that many if not most students apparently did not know had changed – or all three – the committee voted to suspend the rules for now, even though many were uncomfortable that CRLS administration and Principal Damon Smith were not present.

The policy, implemented in a different form in 2013, invokes an attendance violation if the student has four unexcused absences from a class, with three unexcused tardies equaling one absence. The current penalty, begun this fall, is a reduction in the final grade (10 points’ deduction on a scale of zero to 100) for that course, and includes a “buyback” option letting students restore grades through outside work or activities, such as community service, agreed upon by the student, teacher and guidance counselor. A buyback option had been used previously, but had not been available for the past two years. 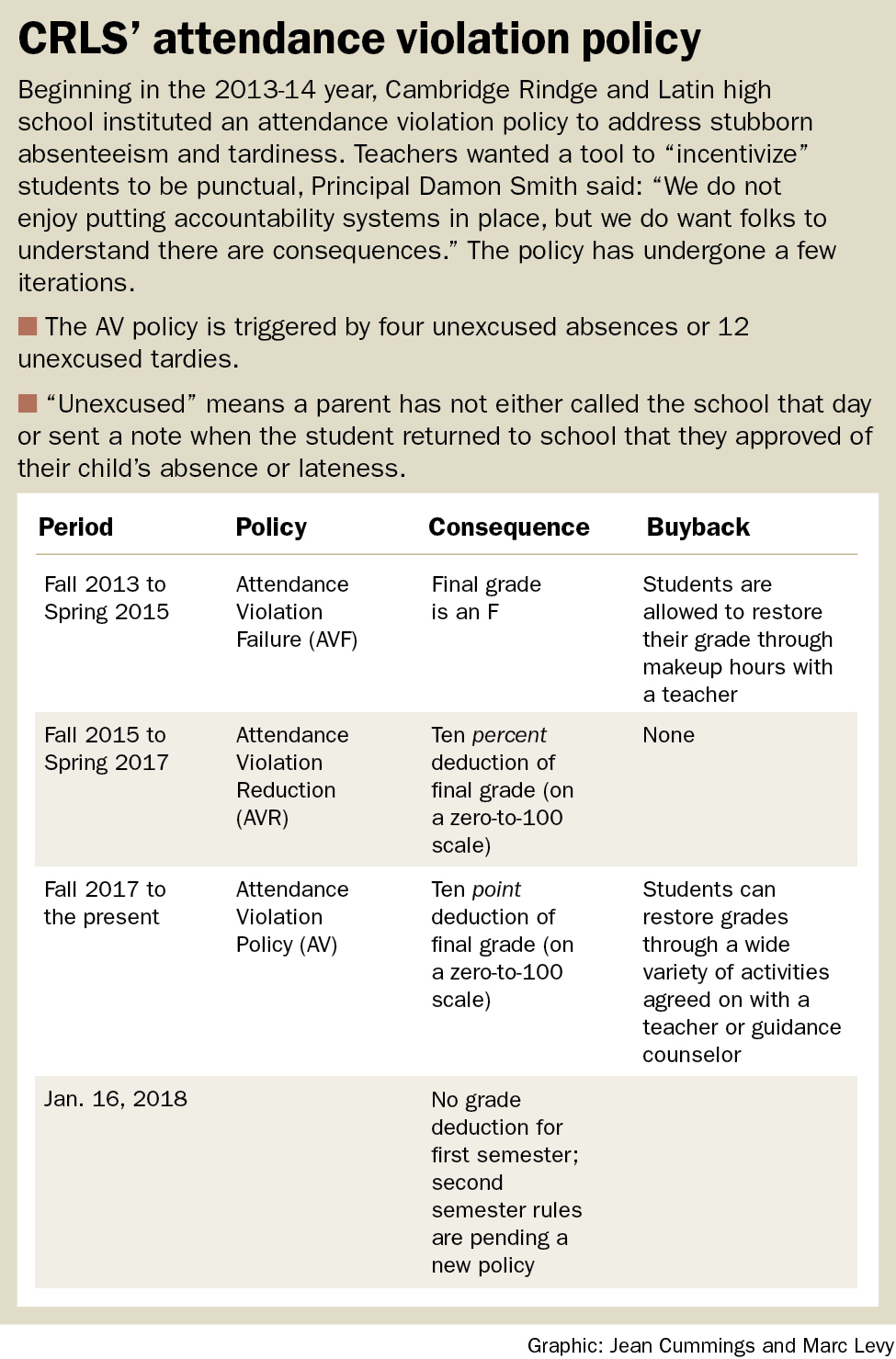 The Dexter/Kimbrough motion moved to suspend temporarily any grade penalty because of the “differential impact on students by disability status, income and race/ethnicity”; the lack of information about the “root causes” of absenteeism; the negative impact of the policy in further alienating students the district is trying to engage; and the fact that the CRLS High School Extension Program “does not use grade reduction as a consequence for unexcused absences or tardies.” 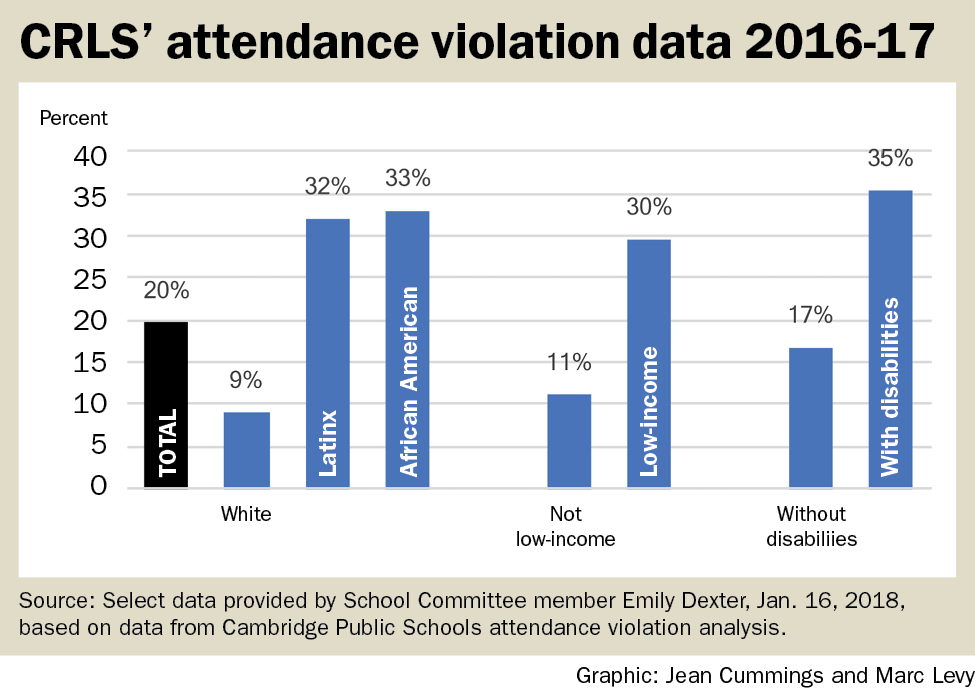 Dexter’s presentation was the first time committee members or the public had seen the data. The uneven impact clearly struck members.

“This is not in line with the best practices of social justice,” new member Kimbrough said. “As a district, if we have to create policies to convince our kids to go to class, then the rigor and joy of learning [described in the district’s “framework” plan] are not happening. I think we can come up with something that works better than what we have.” Kimbrough also referred to the Black Student Alliance video that documented macro- and microaggressions that might keep some students away from class.

“We have been talking about this since the fall that this is an anti-poor policy,” said impassioned student member Sullivan. He and Fleury – both also members of the student government – and other committee members echoed comments made by students, parents and the principal at meetings over the past several months. A perfunctory July review of the CRLS student Rights & Responsibilities document to update staff titles led members to protest that its attendance policy continued to be troubling. A follow-up Sept. 5 vote on the document included public comment by parent Corinne Espinoza that the policy “does not influence students to perform better. Instead, it is discouraging” to already vulnerable students. Members agreed, and a Dec. 5 ad hoc subcommittee meeting was held on the policy.

At that meeting, Smith and students working with the Cambridge Youth Council since the spring to revamp the policy spoke of issues leading to disproportionate attendance violations, including:

Some students may have difficulty qualifying for an excused absence because their parents may already be at work or lack the “resources” or comfort level to interact with administration.

Some students’ parents may be more flexible about allowing, for example, a tired student to be able to sleep in, making it a family determining whether an absence is “excused” or “unexcused.”

Some students may have more responsibilities than others, such as an evening job or getting younger siblings up and delivered to school.

Since there are no school buses for CRLS, students farther from the school often depend on city buses. There are no allowances if the bus is late, which is increasing with traffic and construction, , Smith noted.

Students in foster homes or shelters outside the city, already vulnerable, are more likely to be late.

Some students may be forced to choose between being on time in the morning or having breakfast.

In addition, the policy does not differentiate between being one minute late or 40 minutes. An attempted fix was thwarted by logistics: Students were told the Aspen computer program that tracks student data could not manage it, and the work of recording and tallying individual minutes would overwhelm staff.

Other issues included the four-minute passing time between classes, which can make it almost impossible for students to move from the basement of the arts building to the fifth floor of the main building, let alone change out of gym clothes or go to the restroom. Nolan was concerned that the buyback options were too broad, and should be more centered on classwork. Kimbrough mentioned teacher concerns that creating individualized makeup time could be onerous.

Sullivan also objected to a CRLS “culture of policing,” calling the attendance policy one of its bigger components.

Member Manikka Bowman was clear that the policy needs to change. “If a kid shows up late and still makes an A,” she said, “they should get an A. This impacts scholarships, résumés, jobs.” She recommended that the motion be changed to remove specific recommendations for a new policy and give the staff and students flexibility, which was agreed to immediately by the other members.

While all members seemed moved by these arguments, what to do about it led to some equivocation. McGovern worried that removing any penalty might send the wrong message to students about life lessons.

“The current policy is light years ahead of the old policy in terms of social justice,” said Nolan, referring to the automatic “F” students got in the 2013-15 years. “Many teachers want some kind of consequences,” she said, but added that she was uncomfortable with a “policy disconnect” leaving the Extension School without a grade penalty.

Turk cautioned that comparisons should not be made with the Extension School, which wants to support students who often end up there because of high absences.

It was Salim pushing back the most. He worried about “unintended consequences” from a last-minute policy change, and about a major change without Smith’s involvement. (Per the superintendent’s request, committee members may not contact principals directly. Salim was told of the attendance policy motion one week before Tuesday’s meeting.) He was troubled it would leave “no consequences” for tardiness or absences, leading to student decisions “that may not be in their best interest [and] could have us going in the wrong direction.”

Having a buyback option this fall was a test to see what impact it might have on truancy, he said.

The role of communications failures also loomed large. The committee was unaware until last summer that CRLS had revisited and apparently “approved” a new policy. Even though Smith said they were implementing the new policy with the 10-point grade reduction and a buyback option, this policy was not approved by the committee, nor was it in the new Rights & Responsibilities documents or the CRLS Student Handbook when students began the school year in September. 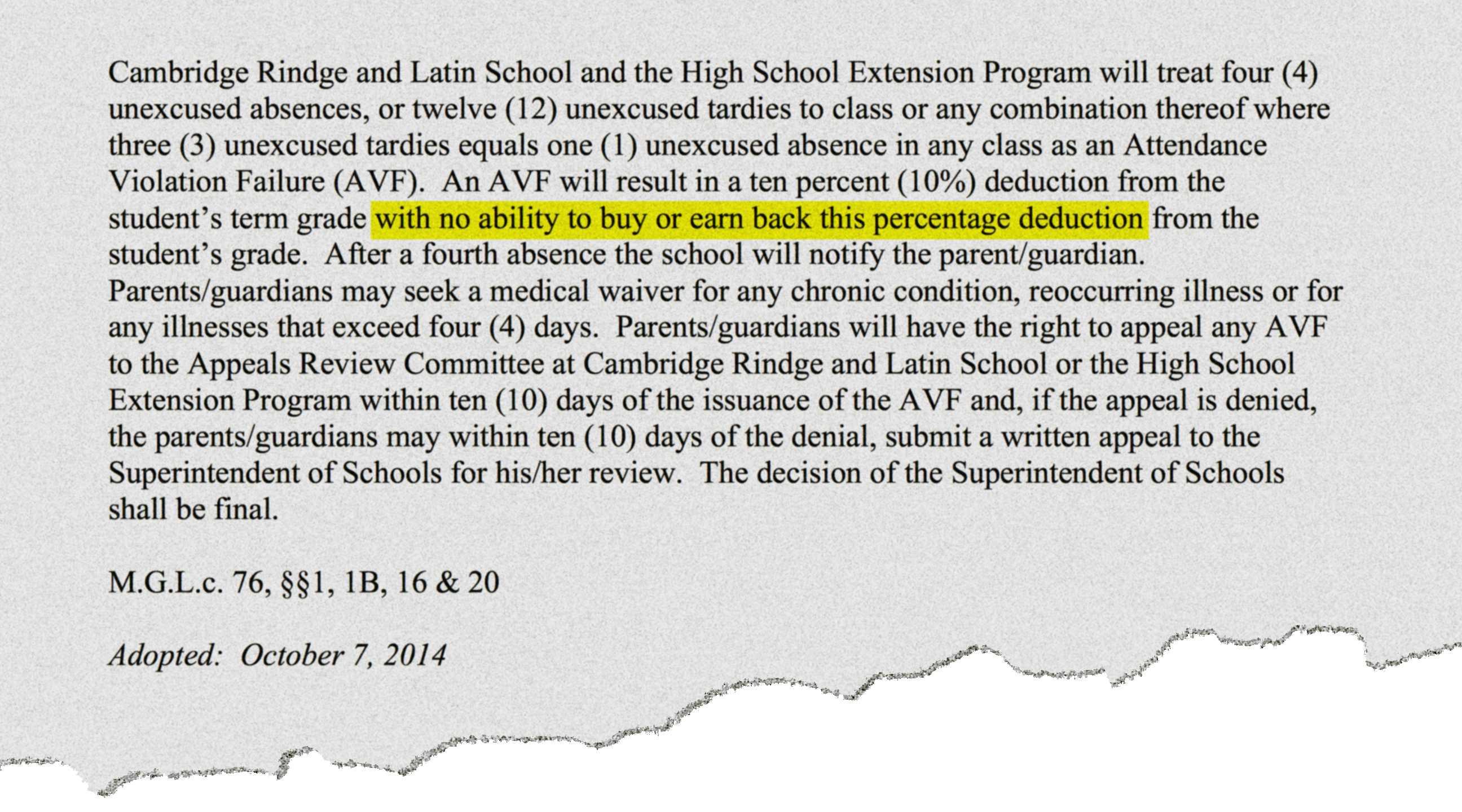 Students must know school rules, but the Cambridge Public Schools’ “Policies and Procedures” page links to an out-of-date attendance policy.

Students and families have to sign forms before the first day of school vowing they have read both documents. But they are no longer printed and sent home, as in earlier years, and the available online documents were for the 2016-17 year – reflecting old policy with no buyback option. The many places people can get information on rules online have not all been updated. As late as Friday, the Cambridge Public Schools “Policies and Procedures” page links to a 2014 attendance policy with no buyback option.

The Dec. 5 subcommittee meeting included several students who said they had no idea there was an attendance violation buyback option, including students who were already “AV-ing.” It was not discussed in the September orientation for first-year students; many said it was never raised in their daily homerooms, or “community meetings.” Student Casey Torres, a self-confessed frequent offender, said that if anyone in the school should know the rules of the policy it was him – and the first time he had heard about it was the Dec. 5 meeting.

“It’s the fault of the administration that students didn’t know about the buyback policy,” Sullivan said. “So it’s lost to me why the consequences are on the backs of the students. Yes, this is a radical change, and we will spring it on the principal,” he said, but it comes back to the data on the unfair impact on students.

The final vote showed unanimous committee support to suspend the penalty for the fall semester.