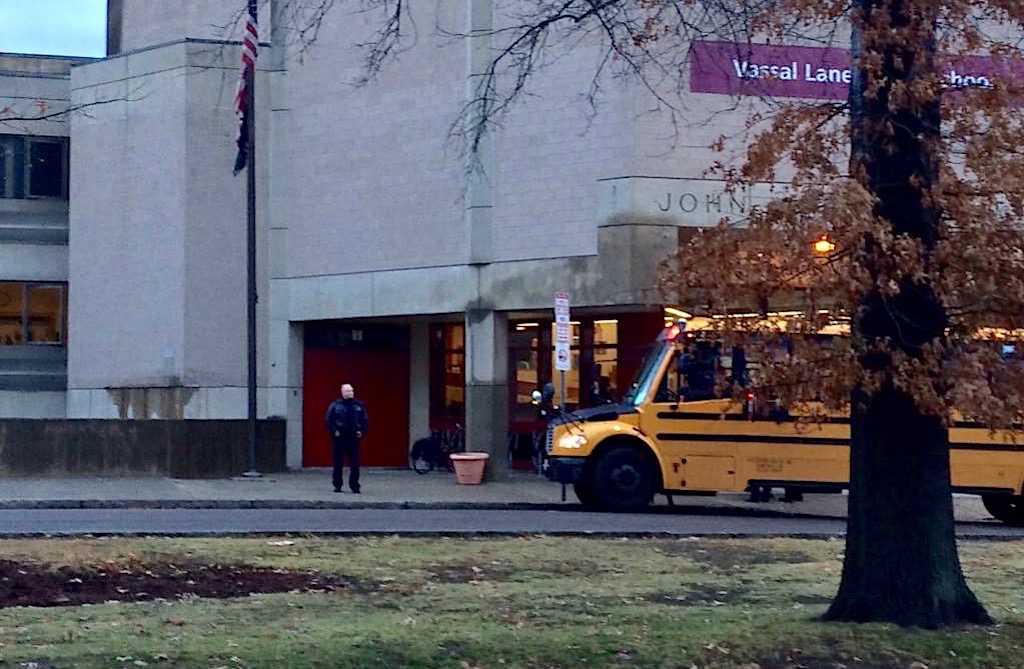 The Tobin School/Vassal Lane Upper School, seen in 2015, is due for renovation. (Photo: Chris Villani via Twitter)

Reconstruction of the Tobin School/Vassal Lane Upper School is projected to total $200 million for a fall 2024 opening, although final elements won’t be complete until 2025, City Manager Louis A. DePasquale told a joint meeting of the City Council and School Committee on Tuesday.

The 1971 building is across the street from Fresh Pond, adjoining well-used sports fields along Concord Avenue. Its reconstruction, DePasquale warned, is very likely to be the last major new school construction; strain on the city budget could mean the school department needs to look at working within existing buildings.

Planners are still unsure whether the school will be renovated or torn down and rebuilt, possibly swapped with the sports fields. “It’s a moving target,” city construction manager Michael Black said.

DePasquale, though, warned that “it’s a real long shot that [the existing school building] will be able to stay up. We will give good reasons when the time comes.”

Those reasons will likely include results from soil testing, which Black hopes to report in June. The site was a clay pit in Cambridge’s long-ago brick industry and later a landfill, and – like the new Martin L. King/Putnam Avenue Upper School and King Open/Cambridge Street Upper School building, due to open September 2019 – the Tobin project will include technology such as geothermal wells to make it energy efficient.

“The school building is fine,” Black said, “but there are significant hazmat and geotech and geothermal impacts. We can’t go down more than three feet” without running into issues. “Underground complexities” will also be an issue for Department of Public Works aspects of the project, and a primary goal is to “maintain a safe site for the workers and the future.” 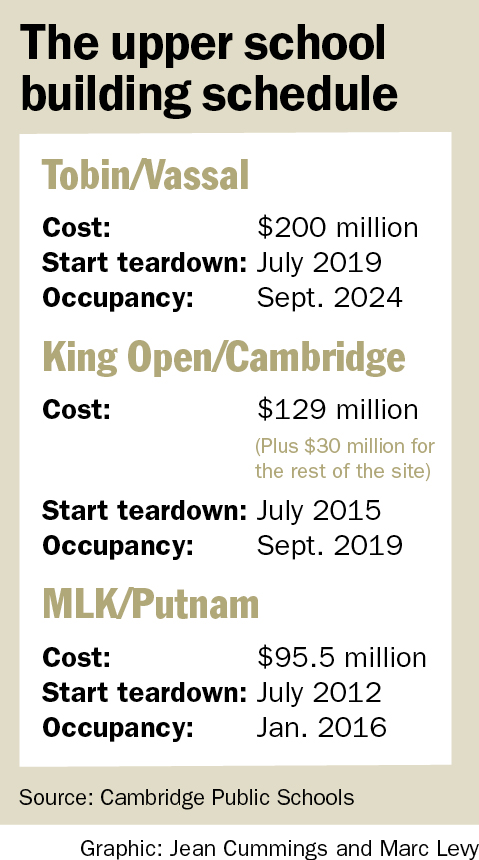 “That’s a much longer time frame than I’ve heard,” she said.

Technically, he may be correct – depending on what he means by “always.”

Although there have been several suggested schedules, the completion date for the Tobin building has never been pinned down. Originally, with the Innovation Agenda proposal creating four “upper schools” in a district that had a dozen K-8 schools, the plan was to rebuild or renovate upper schools every three years, with actual construction time at two years and costs of $30 million each. Planning for the second building was to begin in the last year of the first building’s two-year construction.

Once the Innovation Agenda was passed and real planning began, the schedule slipped. For the first campus – the MLK/Putnam Avenue schools – demolition and construction was three years after its 2012 groundbreaking (actually, a few months more, due to a roof fire shortly before opening). The total cost was $95.5 million, with the decision to “go green” extending time and raising costs. Without hoped-for state subsidies, the city slowed the rate of taking on new school construction debt.

With each additional school, costs have risen and a year has been added to construction time. The second building, the King Open/Cambridge Street complex, began teardown in the summer of 2015 and is due to reopen in September 2019. The construction time was extended, staff said then, because the building was more complicated, including office space for school administration (moving out of a poor-condition rented building), the Valente branch library and Gold Star pool, and in deference to neighbors – officials didn’t want to schedule 16-hour workdays – and because of experience with the Putnam Avenue King School building’s demolition and abatement of potential health risks. The school building will total $129 million (expected to be on budget, DePasquale said). The rest of the complex will be $30 million.

Design for the new Tobin will take place during the next school year; work will begin on the site in the summer of 2019, and construction is projected to end August 2024, DePasquale and Brown said.

Whether students will need to move to swing space is up in the air until a decision is made to renovate or rebuild, DePasquale said.

“That’s not accurate,” answered Black, pointing to the hazardous materials in the ground.

Nolan pushed hard at the schedule and costs, as she has at discussions since the MLK school renovation was being considered. “I want to make sure that if the decision is made to tear [the Tobin building] down,” she said, “that it has to be torn down.” Nolan referred to a several year’s old consultant’s study on Cambridge school facilities that said, structurally, the Tobin building was not in need of renovation, and “there were a couple of other schools way ahead of Tobin in need of repair” that are still untouched.

Committee member Kathleen Kelly supported Nolan, saying “there is a lot of wasted space” in the Tobin that could be reconfigured instead of torn down.

By the time the Tobin is complete, the city will have taken on $454 million in debt for three upper school complexes, assuming the Tobin comes in on budget. City staff have already said that future significant school projects may be dependent on property tax increases.

The higher-than-suggested prices have been attributed to top-quality educational needs, site complexity, use complexity (two schools in one building, for instance, and addition of other uses), green technology, the costs of working in tight urban spaces with residential neighbors and of abating hazardous materials. Additionally, there’s the lack of state reimbursement ($2.3 million may come for the Valente library piece), likely because of the high prices and relative wealth of Cambridge.

Still, the costs and construction time run high compared with school construction across the state, according to Massachusetts Schools Building Association data. A “state-of-the-art” middle school recently finished in Quincy – which required pulling together four sites – took less than two years. Of the 15 schools reviewed at the association’s February board meeting, only five were over $100 million, and four of those have an enrollment over 1,300 students, compared with less than 600 at the Tobin and Vassal Lane schools combined. The fifth school is the Minuteman Vocational Technical High School with 628 students, budgeted at $119 million. Somerville High School’s significant renovation and addition, with 1,600 enrollment, is budgeted at $199 million.

Several research sources try to estimate the premium for building green structures, including schools. The level of efficiency has an obvious impact. A 2003 California government report suggested that the cost premium for green school and office buildings was 2 to 6.5 percent, depending on the efficiency level. A 2009 national report on 30 schools pegged the premium at less than 2 percent.