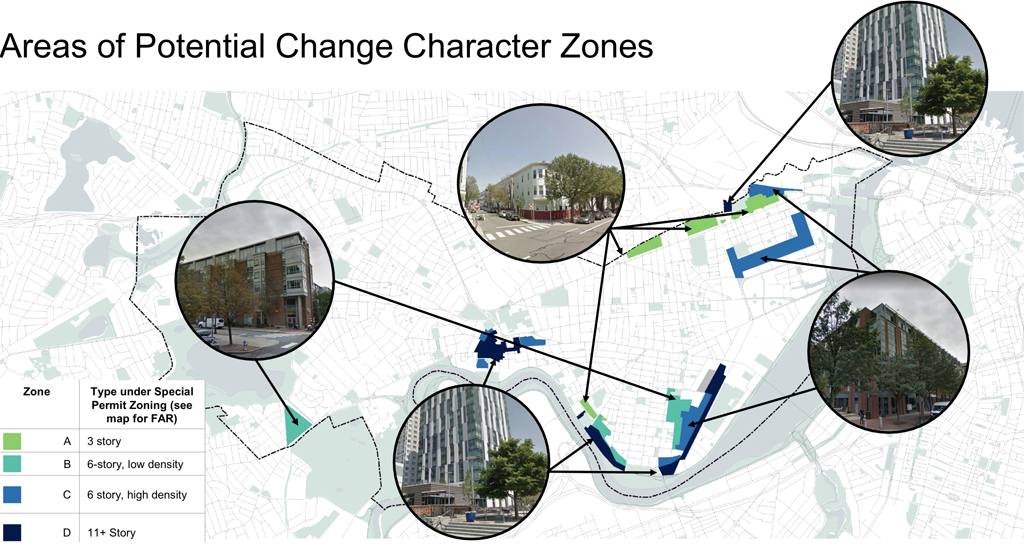 “We need to address affordable housing,” City Manager Louis A. DePasquale said. But the suggested growth “will have a huge impact.”

Commercial property pays about two-thirds of the total property tax base in Cambridge – and the tax base funds about 65 percent of the city’s operating budget. The city leans on commercial taxpayers despite the fact it’s homeowners that account for about 62 percent of all the assessed property value in the city. How? Cambridge takes advantage of a state classification law that taxes commercial property at a higher rate – and Cambridge does the maximum shift, according to the city’s assessing office.

“There are limits that are established in the state constitution that we’re not allowed to go above. If residential is growing at a faster clip, commercial would start paying a lower portion of the burden, and that would be absorbed by residential,” said Bob Reardon, the city’s assessor. “The concern is that it would make the existing affordable taxes on a lot of homes less affordable. Although it would create more affordable housing, it would make existing housing less affordable. That’s something we’re trying to keep an eye on.”

It would flop the existing contradiction Cambridge development lives with: As mentioned by councillor Dennis Carlone, “the more commercial we build, the higher the existing cost of housing goes up because of desirability.” But builders of commercial property pay some cost for that through a “linkage” fee, also called incentive zoning, that charges by the square foot of property built that is expected to lure new worker residents and displace existing residents. The money goes to build affordable housing, and was raised in 2015 after nearly three decades of stagnation.

The city also recently roughly doubled the percentage of units in large residential properties that must be set aside as affordable – to 20 percent – and it started putting money from the budget directly into affordable housing, all while maintaining the highest percentage possible of Community Preservation Act funds going to preserve expiring affordable housing or build more.

But the Envision Cambridge process, now in its third and final year of discussion with various citizen working groups, makes affordability first among priorities so residents don’t continue to be squeezed out of an increasingly expensive city. The top-voted actions in the process are to increase existing city funds dedicated to affordable housing; continue to look for new funding sources to build it; and to change zoning to enable more housing to be built, including affordable housing.

If votes taken to enact the goals of Envision Cambridge lead to a surge in housing construction, the balance of residential vs. commercial will push the city outside state law’s rules for leaning on commercial ratepayers.

“Right now the reason our tax bills are what they are is because of the balance between housing and commercial,” DePasquale said. “I do not in any way want to scare people, but I am talking dramatic [change]. We need affordable; how do we continue to move affordable and move commercial and keep a balance?”

Presentations on the way

It’s a confusing topic, DePasquale said, and he planned to talk with the head of the council’s Finance Committee, E. Denise Simmons, about scheduling a hearing to clarify the issues.

In addition, the Envision Cambridge team – a company called Utile – and city planners expect to come back in early or mid-September to hold public meetings and present to the council and Planning Board a sense of how the master plan might affect the city. “We will present different buildout scenarios and see different impacts [for housing and population] as well as the impact on the tax levy,” said Melissa Peters, senior planner for the city.

The warning about the end of low residential property taxes is not DePasquale’s first attempt to signal that Cambridge’s golden era of comfort and spending may end sooner than many expect. He has also said that the city’s massive investment in overhauling three campuses serving six schools will cost the city its ability to spend elsewhere, and that the debt might signal an end to self-funding big projects and a need for ballot referendums in which voters would decide a project’s value – because it would be paid for with an increase in property taxes.

As big as DePasquale and Reardon suggested the impacts would be, Mayor Marc McGovern wasn’t sure he was seeing the reasons for those changes represented adequately in the documents presented Monday by Utile.

“If we’re going to look at citywide zoning and look at Massachusetts Avenue and say we’re going to go from three stories to four, woo-hoo. You know? That doesn’t really excite me,” McGovern said, stressing that he also needed to see tall buildings and density citywide, not just in obvious locations such as Central Square and East Cambridge – and so far the projections showed smaller increases in traditionally single-family havens such as West Cambridge.

“If that’s because it makes sense for whatever criteria we set out, I can have that conversation. But if that’s being driven because we’re afraid people in those neighborhoods are going to be upset because it’s too much of a change for them, I’ll have that fight,” McGovern said. “Every neighborhood has to accept the responsibility of our housing crisis. Not just East Cambridge, not just Central Square.”