As 10th gunfire incident of the year is heard, councillors call for ‘aggressive new strategy’ 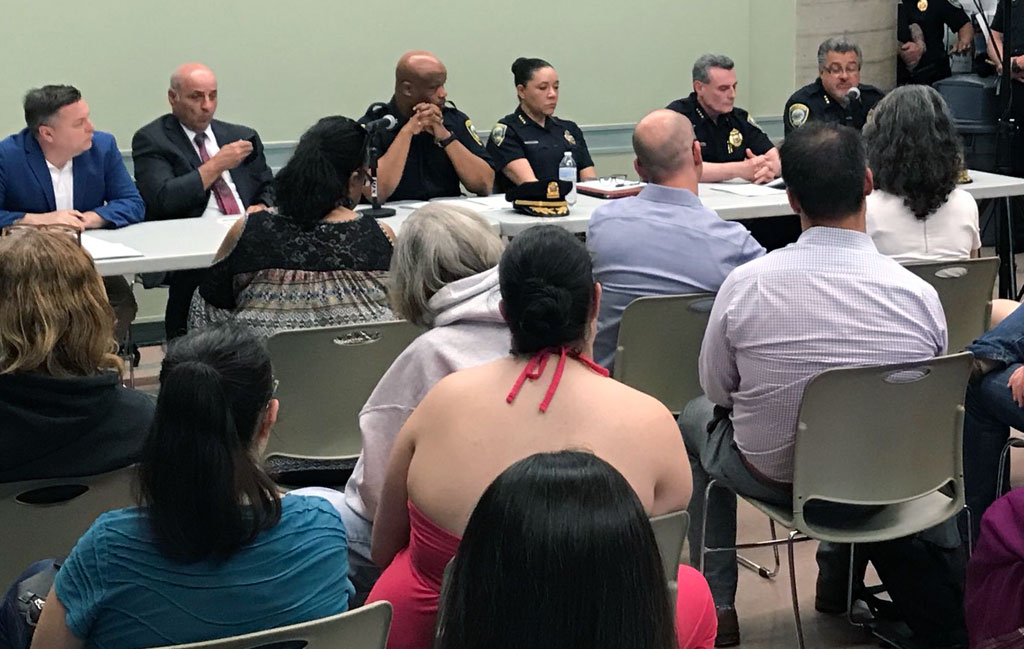 As 10th gunfire incident of the year is heard, councillors call for ‘aggressive new strategy’

City officials meeting with residents May 30 in The Port neighborhood about a spate of recent shootings. (Photo: Cambridge Police Department via Twitter)

Police responded Saturday to The Port neighborhood for the 10th gunfire incident of the year – like nearly all the others, an incident that resulted in no reports of victims.

Several calls about gunshots and an activation of the ShotSpotter tech meant to hear gunfire in the city brought police to 210 Broadway at around 9:26 p.m. Saturday, where police found shell casings around the corner on Moore Street – as well as two firearms, one of which was loaded, officials said. There were no immediate arrests.

With a doubling of gunfire incidents from last year, a community discussion led by Police Commissioner Branville G. Bard Jr., Mayor Marc McGovern and City Manager Louis A. DePasquale was held May 30 at The Port’s Pisani Center. But the continuing incidents have McGovern and city councillors E. Denise Simmons and Alanna Mallon planning to use their Monday public meeting to call for “an aggressive new strategy to reduce the violence” in the Port and Wellington-Harrington neighborhoods.

All of the year’s gunfire incidents have taken place in those neighborhoods; most have been in the early morning and resulted in no reported victims, though a May 30 confrontation between a Shell station and a man stealing a bottle of water resulted in the clerk’s foot being grazed by a bullet.

The city doesn’t make strong connections between one gunfire incident and the next, and Bard told residents they were isolated incidents in which “nothing seems to lend itself to retaliation” – an indication that what residents are hearing around them is not gang-related activity.

Asked directly about gang activity in late April, Jeremy Warnick, director of communications and media relations for Cambridge police, would say only that “We have seen at-risk youth involved with handgun violence and assault” and resisted answering what gangs operated in the city and how big and enduring they were. Gang activity gets only a glancing reference in the annual crime report covering last year.

“As you know, Cambridge borders seven other urban and densely populated cities with documented gangs, gang activities and gang recruitment that can span across municipal borders. The issue is not as pervasive in Cambridge as it is in other jurisdictions,” Warnick said. “Within the city, however, there are neighborhoods or designated locations that at-risk youth may associate with or identify as their territory.” He wrote:

“At-risk youth crime in Cambridge primarily includes selling/using drugs and street crime such as robberies. We have seen at-risk youth involved with handgun violence and assault. Some associates of these groups have also moved into the financial crimes field, such as making fake credit cards and using them to steal money from victims’ accounts. Definitive, quantifiable data on these crimes as it pertains to their correlation with gang activity, however, is difficult to determine.”

In April, the state announced $5.7 million in competitive grants to cities and towns across Massachusetts to use to combat gang violence and support local at-risk youth. Cambridge, along with Somerville, Chelsea, Everett, Malden, Quincy, Revere and Winthrop, got a collective $307,000 under the Shannon Community Safety Initiative, or “Shannon Grant.”

For Cambridge, that was just $18,531, which went toward Metro Gang Task Force overtime “as it pertains to hot spot patrols and our Focused Deterrence initiative,” Warnick said. More than $3,000 of those funds will be subcontracted to the Community Arts Center for the Late Night Basketball Program that runs in the summer.

“This funding is similar to what we’ve received in the past from the same grant,” Warnick said.

But while the $5.7 million statewide was the same last year, Cambridge was then given just over $32,000, making this year’s funding a 42 percent drop.

This post was updated June 18, 2018, to add that two firearms were found at the scene of Saturday’s shooting.