With data showing racial divide in housing, issue of discrimination due for examination 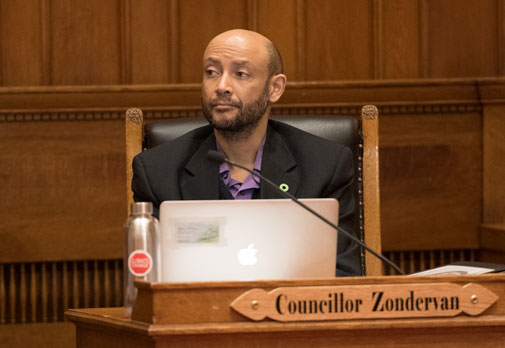 With data showing racial divide in housing, issue of discrimination due for examination

The issue of housing discrimination in Cambridge is coming under unaccustomed scrutiny. The City Council on June 25 took steps to update the city’s 34-year-old fair housing ordinance and at the meeting some councillors questioned how well the city’s Human Rights Commission deals with housing bias.

Sumbul Siddiqui and Quinton Zondervan expressed surprise at the total of 40 housing discrimination complaints received by the commission in the past four years. “I thought there would be more,” Siddiqui said.

Councillor E. Denise Simmons, head of the Council’s housing committee, said the committee intends to look into “outreach” by the commission and other aspects of its work. “We’re talking about discrimination … We can’t get at that unless we have significant outreach so people know to complain,” she said.

Zondervan brought up another issue, saying he knew of “situations where discrimination didn’t take place because we prevented it” by informing landlords that they couldn’t reject an applicant solely because he or she had a Section 8 rent voucher. He asked the Human Rights Commission’s executive director, Nancy Schlacter, if she knew “how often this happens … that landlords are not aware that they can’t just say no because they feel like it.” Schlacter said she couldn’t answer because “we are a complaint-driven agency.”

In a later interview, Zondervan said intervened in two cases in the past six months in which tenants faced displacement because of a big rent increase. Zondervan worked with the Cambridge Housing Authority to obtain emergency Section 8 vouchers under the agency’s three-year-old policy offering the rent aid to low- and moderate-income tenants who were about to lose their housing because of rent hikes. Tenants get the vouchers so they can remain in their apartment. But in both cases landlords balked initially at accepting the vouchers despite being satisfied with the Section 8 rent level and knowing the tenants, he said.

In the first case, Zondervan and the authority threatened to file a discrimination complaint, he said, and the owner agreed to take the voucher. In the second case, still not resolved, “we’re about to” warn about a complaint, Zondervan said. The solution is temporary – a one-year lease for the tenant – and Zondervan said he would like give small property owners who live in their buildings an incentive to accept Section 8 tenants, such as a property tax deduction.

Schlacter defended the number of complaints filed at the commission, saying the U.S. Department of Housing and Urban Development considers it “well within” the expected total “for a city this size.”

Simmons said the housing committee will ask more questions of Schlacter. Meanwhile, councillors approved the new fair housing ordinance with protections against discrimination based on gender identity. It won’t be final until it’s approved at a second council meeting July 30; state legislators must also allow the changes.

Cambridge has a reputation as progressive, inclusive and tolerant of diversity, although rare police actions such as the arrest of Harvard University professor Henry Louis Gates Jr., an African-American, while he was trying to get into his own house sparked national outrage and presented a different image. Some statistics suggest that the city may be more racially divided than its reputation portrays.

For example, an analysis of census figures by the Cambridge Health Department found that half of all families living in poverty lived in just six of the city’s 32 census tracts; those six tracts contained many of the city’s public housing developments. Black families were three times as likely as white families to live in poverty. 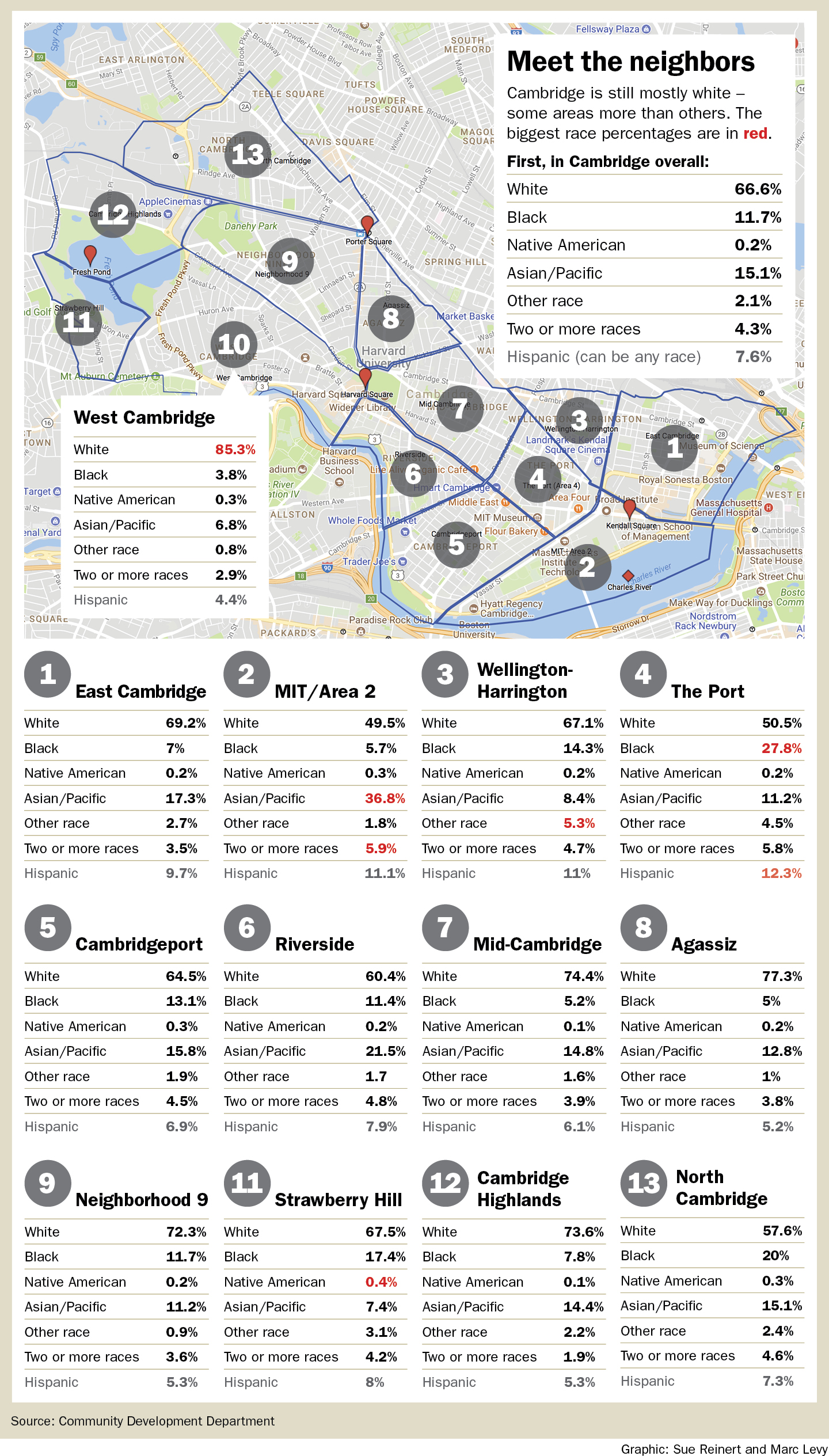 Analyses by the city’s Community Development Department of 2010 federal census figures show the proportion of whites by neighborhood varied from 50.5 percent in The Port near Central Square to 85.3 percent in West Cambridge. An annual report on Massachusetts mortgage lending by race has consistently found that black, Asian and Latino applicants are turned down more often than white mortgage seekers, in Cambridge as well as the rest of the state. According to the reports, the disparity persists at all income levels statewide.

Public housing has its own divide. Developments for elderly and younger disabled tenants have a higher percentage of white tenants than do family developments. The racial breakdown also varies among individual elderly/disabled developments, with some locations housing a markedly higher proportion of white tenants than others. Cambridge Housing Authority officials said they didn’t know why. Public housing applicants can select the development where they want to live.

The statistics don’t prove that anyone is discriminating. The Community Development Department’s housing director, Christopher Cotter, in charge of preparing the city’s report on fair housing for HUD, said “the larger patterns” of neighborhood racial differences “are the result of a lot of decisions and policies over time.” The most recent city fair housing report, in 2015, didn’t include racial or economic breakdowns by neighborhood and focused on efforts to increase the supply of affordable housing as the solution to fair housing challenges. 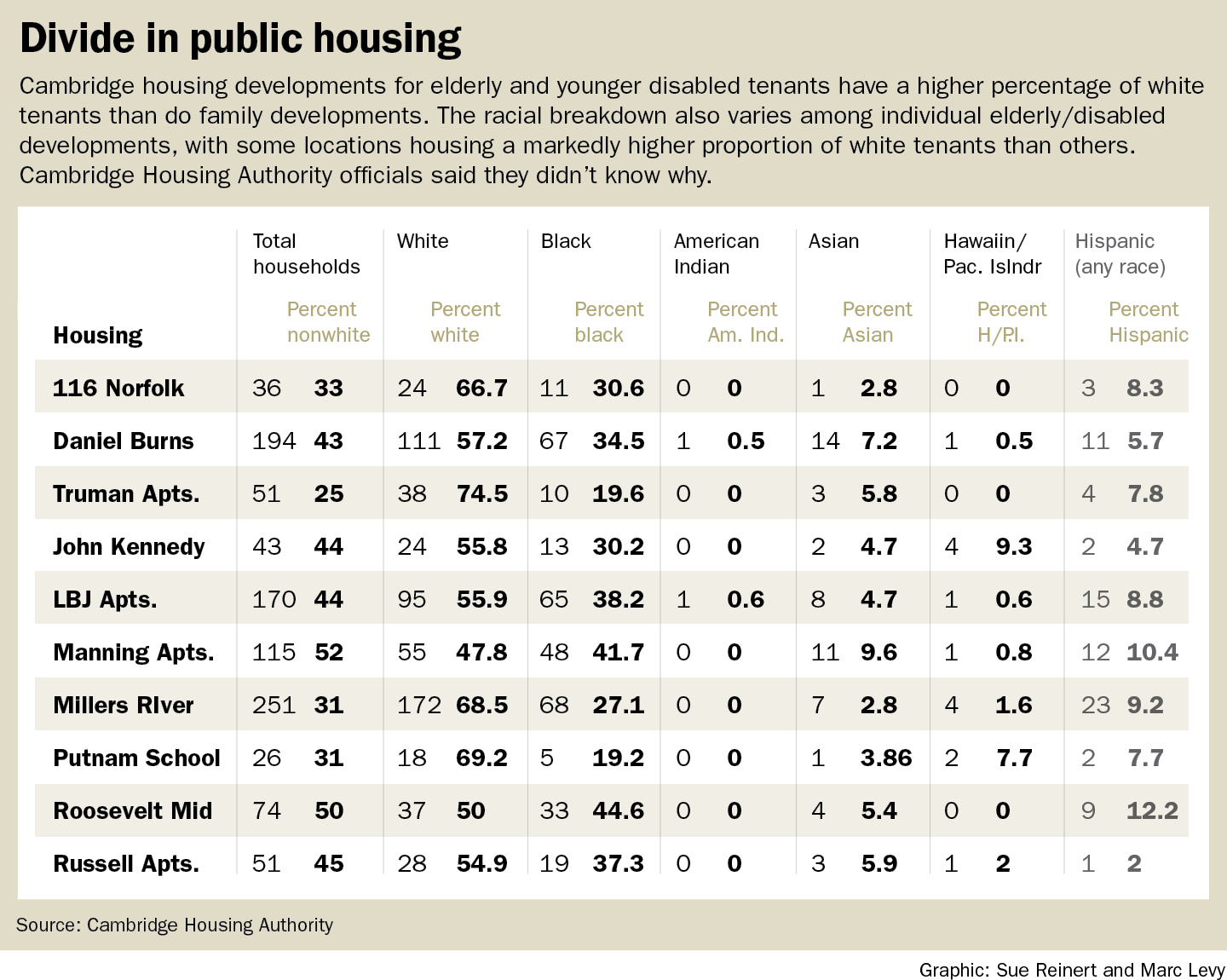 Describing another way the city is working to promote fair housing, Cotter said teams of residents working on Envision Cambridge, the city’s effort to design its future, will recommend considering fair housing issues in housing programs and policies and setting a goal to increase “underrepresented races and ethnicities” in the city’s population by 2025.

The city and the housing authority intend to collaborate on another fair housing report despite a controversial decision by the Trump presidential administration to suspend the requirement to file one. The mandate had been strengthened by HUD officials in 2015 under former President Barack Obama.

Originally the city had until 2020 to file plans to “affirmatively further fair housing” with HUD, but the government first extended the deadline to 2025, then eliminated it and finally killed a statistical tool intended to help communities comply with the rule.

The 2015 regulation replaced a more passive requirement to analyze “impediments” to fair housing. Fair housing advocates had argued for years that a 1960s-era law requiring communities to promote fair housing in the use of HUD funds was not being enforced because of the weak rule, and they welcomed the 2015 regulation. Advocates have sued the federal agency over the suspension of the rule.

The housing authority has hired an intern to analyze data from its own programs, said its general counsel, Sue Cohen. One area of concern is finding whether low-income Section 8 rent assistance tenants are being forced to find apartments in “areas of lower opportunity” because of high rents in Cambridge, she said. “There’s some real issues with our voucher holders being able to live in certain areas in Boston and Cambridge,” she said.

“Our hope is that with bringing in an intern and finding different ways to collect and identify data we might find some ways to engage the community,” Cohen said. Assistant general counsel Shayla Simmons said the authority had been looking forward to “instead of just reporting, to actually making some change.” HUD’s abandonment of the new rule “was a disappointing move,” she said.

Enforcing fair housing law is difficult. “The number of complaints doesn’t always correlate with the extent of the problem,” said Whitney Demetrius, deputy director of the Fair Housing Center of Greater Boston. The center investigates individual complaints and systemic bias by sending out “testers” of different races or other attributes protected by the law, who apply for housing.

People don’t always know they have been discriminated against. “Often the person is told the apartment is rented, they go on about their business,” Demetrius said.”One of the other barriers is getting the word out” about the law and how to complain, she said, echoing Simmons. The center’s funding for advertising has declined, Demetrius said.

Zondervan, the city councillor, said giving landlords an incentive to rent to Section 8 voucher holders might get around the difficulty of proving discrimination based on source of income at least. Landlords aren’t necessarily biased; the owner who initially refused to accept a voucher despite knowing the tenant and being satisfied with the rent told Zondervan he didn’t trust city government.

“He didn’t want to enter into an agreement with the city,” Zondervan said. (The housing authority, not the city, oversees Section 8). “There were also feelings of hurt and not wanting to be tied down,” Zondervan said. “It’s a very delicate situation. I don’t want to come across as these are evil people.”