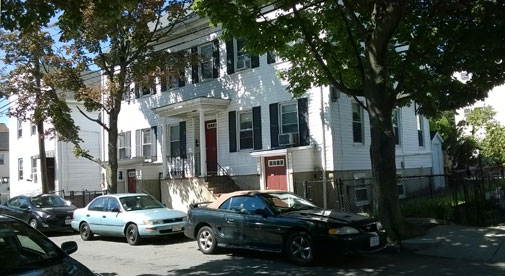 The property at 33-35 Harding St. has become an ad hoc test case for higher Section 8 vouchers after a jump in rents. (Photo: Sue Reinert)

Trying to keep low- and moderate-income tenants in Cambridge despite skyrocketing rents, the Cambridge Housing Authority will offer emergency Section 8 rent vouchers to people facing big rent increases or housing expense burdens. But there’s a catch: Their landlords must be willing to accept the government’s limits on voucher rent levels, already falling short of the white-hot market.

Authority commissioners who voted Aug. 12 to adopt the policy were moved in part by the plight of East Cambridge tenants whose longtime landlord sold their buildings to a real estate investment company in June, triggering hefty rent hikes. 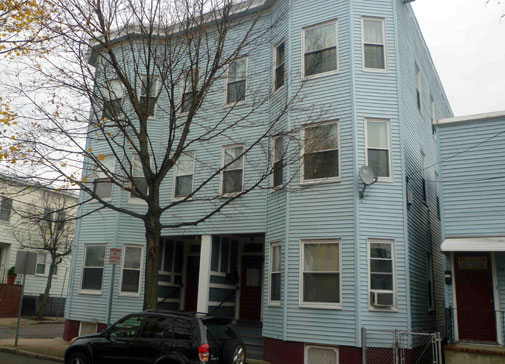 “This really shows us how far the community has moved from affordability,” said the authority’s executive director, Greg Russ, referring to the situation at 33-35 and 34-42 Harding St., in the Wellington-Harrington neighborhood. It’s not clear how much the new emergency Section 8 policy will help tenants there, though, because the new landlord has not said whether he would accept the vouchers.

That is the sticking point for policy-makers trying to use Section 8 to preserve affordability. Under the program, low- and moderate-income tenants pay roughly 30 percent of their income toward rent, and the federal government contributes the remainder – up to a rent limit established by regulators.

In Cambridge, the housing authority has used special powers giving it flexibility to set maximum rents 25 percent higher than the standard limits, yet Section 8 maximums still trail the market, officials say. Currently more than half the people with Section 8 vouchers from Cambridge end up renting outside the city, Deputy Executive Director Michael Johnston said. The percentage has been increasing for several years.

“If we actually ended up with 12 [emergency vouchers under the new criteria] in a year I would be surprised, because landlords don’t want it,” Johnston told authority commissioners. Under the expanded definition of emergency, tenants who face a rent increase of more than 25 percent or who are paying more than 40 percent of income for shelter, including an allowance for heat, would be eligible.

Previously, “we had this philosophy that if you don’t pay the rent it’s your fault,” Johnston said. “But the Cambridge market has gone so crazy” that the situation demanded a change, he said.

Mortgage in the millions

In many ways the case of the Harding Street tenants was a familiar story. A landlord that had owned the buildings for decades, keeping rents relatively low, cashed out. The Martins family of Somerville sold the properties, with 15 units, to Boston Investments, also of Somerville, for a total of $3.6 million.

Now the buildings had a mortgage of almost $3.3 million to support. Tenants soon got notice of big rent increases. Ten of the apartments are now occupied.

No one might have taken notice, but longtime feminist and political activist Ti-Grace Atkinson lives at 35 Harding St. She organized the tenants and they sought help from city councillor E. Denise Simmons, the city’s Multi-Service Center, the Alliance of Cambridge Tenants and Cambridge and Somerville Legal Services.

Tony Madan, who manages Boston Investments, did not respond to a request for comment left with a person who answered the phone at a number listed on the Boston Investments website as Madan’s cellphone. According to corporation and property records, Madan and two siblings, Dave and Rekha Madan, have developed numerous projects, most in Somerville.

The Boston Investments website says the company was founded in 1996 and “specializes in high-end rental housing and luxury condo development located in desirable areas.” There are several posts identified as being from tenants, praising the company. And, according to the website and corporate records, Boston Investments is like the previous landlord in being family-run.

There are other wrinkles that make the story a little different from the classic small-landlord-big-landlord model. Dave Madan founded TheMove, a Somerville nonprofit that organizes volunteer workdays for city kids at area farms, promoting local, fresh food. And the lender that financed the Harding Street purchase is Digital Federal Credit Union of Marlborough. Digital is one of the 20 largest credit unions in the country but, like other credit unions, says it advocates for consumers and contributes to local communities.

Atkinson, 76, got an eviction notice July 1, the date of the tenants’ meeting she organized, she said. She has lived in the Harding Street apartment for 18 years and was paying $800 a month for a 1.5-bedroom apartment that Martins had never painted or otherwise updated, she said;  neither her bedroom nor her study has any source of heat.

“You work out a way,” Atkinson said. “They never painted and I painted.”

After the sale, she said, “everything changed drastically in every way.” Martins had been satisfied as long as people paid their moderate rents on time, she said. Besides raising rents, Madan demanded that tenants sign leases making them responsible for snow removal, and he stopped putting out trash barrels on the weekly trash removal day, Atkinson said.

“There was constant harassment” with threats of “‘If you don’t agree you’re out,’” Atkinson said.

Atkinson is the only tenant to get an eviction notice; others face rent increases, Cambridge and Somerville Legal Services attorney Susan Hegel said. And Atkinson may turn out to be the only one who could benefit from an emergency Section 8 voucher – temporarily, that is.

That’s because the new landlord, Madan, appears willing to accept a voucher from her, Hegel said, but only if she agrees to move out by next May 31. As for the other tenants, Madan “indicated that he would consider accepting [Section 8] depending on the rent amount,” Hegel said. In addition, it’s not known whether tenants qualify for the program, which helps people whose income is below 80 percent of the median for the area.

Pressure, but no constraints

The current maximum Section 8 rent for a one-bedroom apartment in Cambridge is $1,495, and it is $1,867 for a two-bedroom unit. The limits were adopted in October; they are 25 percent higher than the standard limit.

A one-bedroom apartment at 35 Harding St. now being advertised online asks $2,090. Hegel said Madan had showed her one page from what appeared to be a loan document, requiring him to achieve average rents of $2,150 a month by September 2016. “So he feels pressured to get the units renovated,” she said.

Atkinson said the situation has opened her eyes. “I’ve had seven or eight landlords in my life,” she said. “Usually you work cooperatively.”

“The rental situation is really out of hand in Boston and Cambridge,” she said. “Everyone seems to have a story. There’s no constraints at all.” The sale of the buildings has turned into “an organizing potential” that may produce some legal controls limiting rent increases, she said. Even homeowners on Harding Street are supporting the tenants, she said. “They’re very upset because they know we care about the neighborhood,’’ she said.

Section 8 “is a short-term fix” that only enables some tenants to pay ever-increasing rents, Atkinson said. “It does nothing to challenge the system.”

Hegel agreed, and said the Alliance of Cambridge Tenants and other affordable-housing advocates “hope to have some meetings with city officials and brainstorm and get to these properties before they get sold to investors.” That might mean having a nonprofit entity buy the property. One idea under consideration is to have the city “not give city supports” if a deal would push rents up drastically.

“If they didn’t make me angry I wouldn’t have the strength” to protest, Atkinson said. The answer, she said, is “rent stabilization” to control rent increases 21 years after a statewide referendum ended a complex system of rent control in Cambridge.

The issue was also raised in June after tenants in each of the 111 units of the Harvard Towers building at 295 Harvard St. got notice their leases ran out Aug. 31 and wouldn’t be renewed, plunging them into the tight Cambridge housing market on short notice so the building’s owners could renovate the property.

Owners as well as renters may support curbs on rent increases now, Atkinson said.”The division between renters and owners is not that big,” she said. “People want to live in a nice neighborhood … It’s really a matter of people knowing they’re not alone and if they want change they have to work for it.”