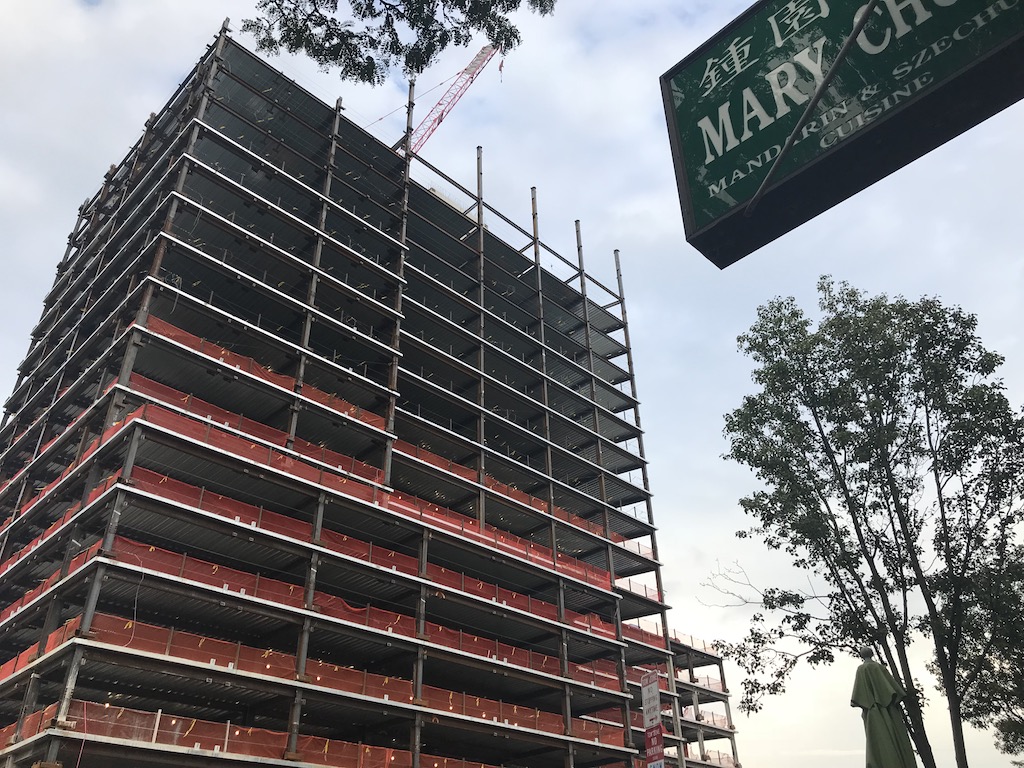 The Market Central projects in Central Square, seen under construction Oct. 4, will provide the city with 61 affordable units, or more than the 20 percent of total rentals agreed on when winning City Council approval in May 2015. (Photo: Marc Levy)

Issues of housing, and especially affordable housing and zoning that might encourage it, dominated a Monday roundtable held by the City Council to look at the three-year citywide master plan process called Envision Cambridge. But more questions than answers emerged that the council will have to grapple with directly as the consultant running the process finishes its work, leaving behind 37 goals, 42 strategies and and 175 actions to consider.

At the end of the two-hour roundtable, the city’s housing situation looked much the same as at the start.

Among the targets suggested by Utile and the city’s Community Development Department are to add 12,500 housing units to the city by 2030, with 3,175 of them being dedicated affordable housing – available to people who can’t afford living in Cambridge by paying what the market allows.

The overlay concept has caused “some consternation” among the public, said Iram Farooq, assistant city manager for community development.

It also faces doubts among councillors. While Quinton Zondervan said he was impressed by the goals identified by Envision Cambridge, he said the overlay was misguided because creation of affordable units will still be limited by funding even if the zoning changes. While nonprofit developers of affordable housing might be better able to compete for sites by being able to build more units and bring more return on investment, it doesn’t change the underlying funding – and therefore “does not lead to additional 100 percent affordable housing beyond what we would build anyway.”

The zoning could change where the housing went up, but building units for low-income residents in Cambridge’s most residential areas could strand people far from the access to transportation, groceries and other needed resources. “If we don’t comprehensively maintain affordable livability, we’re wasting our time,” Zondervan said.

In discussing super-inclusionary bonuses, councillors raised doubts that even the current inclusionary rules were working. The rule now is that developers of residential projects of 10 or more units or more than 10,000 square feet of living space can bulk up their projects by making 20 percent of it dedicated affordable. “I’m not exactly sure how 25 percent would help us get to a place if we’re not even seeing projects permitted because the 20 percent is too high,” councillor Alanna Mallon said.

With only one project in the pipeline under the 20 percent inclusionary bonus and those inclusionary rules by definition continuing to tilt the city’s units heavily toward pricey market rates, Mayor Marc McGovern said the “only way we’re going to make a dent in the affordable housing crisis is by projects that are a much higher percentage, even 100 percent, affordable.”

Super-inclusionary construction would also represent a major shift in the tax base from commercial to residential, City Manager Louis A. DePasquale warned, which could have “a major effect” on the city’s ability to pay for the big projects of the past several – and next several – years, including school and fire station renovations.

What was left out

Councillor E. Denise Simmons expressed frustration that the roundtable didn’t include more conversation about Envision Cambridge topics beyond housing, such as recommendations about the economy, mobility, climate and environment, “urban form” issues such as street vibrancy, and community well-being. But on Oct. 1 she’d stymied a suggestion by councillor Dennis Carlone to have the council examine each set of Envision Cambridge working group proposals in committee, and when the order returned Oct. 15, she then inquired whether it was the best process – saying she thought it would be “a little early” – and wound up voting “present.” On Monday, when Farooq noted that each set of working group recommendations would be looked at by council committees, Simmons asked what the process would have been if the council hadn’t approved Carlone’s order: “What would you have done if we hadn’t asked?”

School Committee member Emily Dexter was in attendance and noted afterward that the city will also have to plan for additional schools as the population increases, as some school buildings are already at maximum capacity. She said she was “surprised there was so little mention” of public schools in the presentation or the handouts summarizing the report.