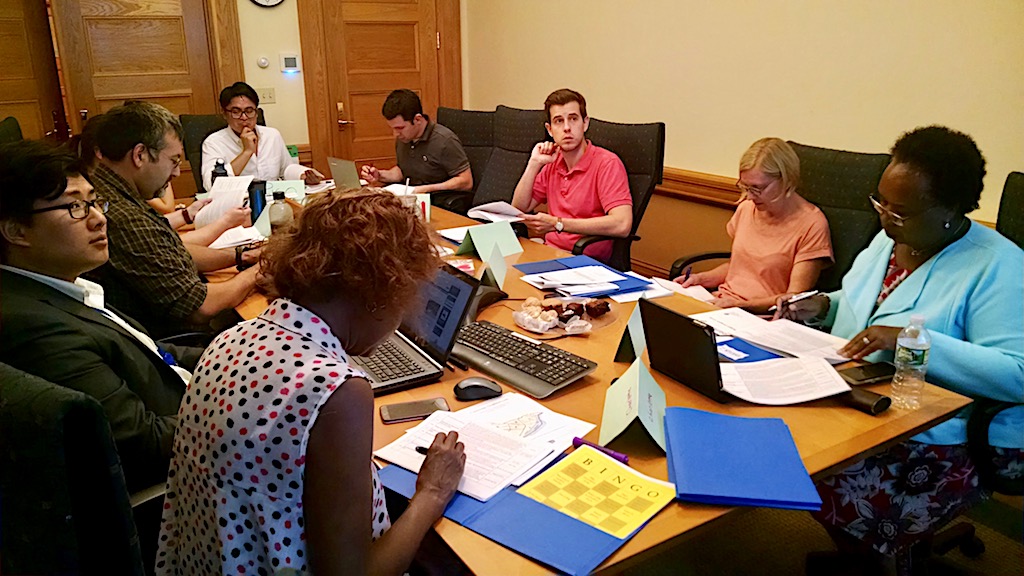 Participatory Budget delegates work in August to narrow 608 submitted ideas to 20 projects to be voted on by residents 12 and older. (Photo: City of Cambridge)

Voting ends at midnight in the city’s Participatory Budget process, in which residents age 12 and older get to decide how to spend $800,000 of the city’s budget.

There are 20 projects in the running, ranging from $20,000 (for public Wi-Fi in Inman Square and Russell Field, or for two bicycle wash stations) to $200,000 (for renovation and inclusive additions to playgrounds, or new musical instruments for the high school), and voters can choose five.

This is the fourth year the city has run the process, with the amount of money and participation growing each time. It began at $500,000 (though the city ultimately awarded $527,400 in projects), and more than 2,700 residents voted; in the second year, the city set aside $600,000 and 4,184 residents voted; last year, it was $700,000 in disbursements voted on by 4,730 residents. This year, some 3,000 people had already cast ballots by Tuesday, halfway through balloting, according to Participatory Budget staff.

The final proposals were winnowed from 608 ideas submitted by residents. While bicycle infrastructure proposals had been among the most popular in years past, this year saw none – and in a year that saw the rollout of two protected bike lanes provoking significant complaint from some business owners and others, that is not a coincidence.

“One of the most popular ideas submitted – based on number of votes and related ideas – was for more protected bike lanes throughout the city,” said Alex Meyer, a budget delegate in the process who wrote about his experiences in a piece published on Medium. “However, this year the city rejected any protected bike lane projects for the final ballot.”

“I came away from it all a bit disappointed,” Meyer said.

The reason the city gave for separating out bicycle projects, as quoted by Meyer:

An email was sent Monday seeking comment from Traffic, Parking & Transportation Department Director Joseph Barr, but Barr did not reply.

The projects can be explored and a ballot cast at pb.cambridgema.gov.

The winning projects will be announced at a PB Vote Results Party from 6 to 7 p.m. Tuesday at the Citywide Senior Center, 806 Massachusetts Ave., Central Square.