No change yet to law about low-income aid, but immigrant advocates see growing fear 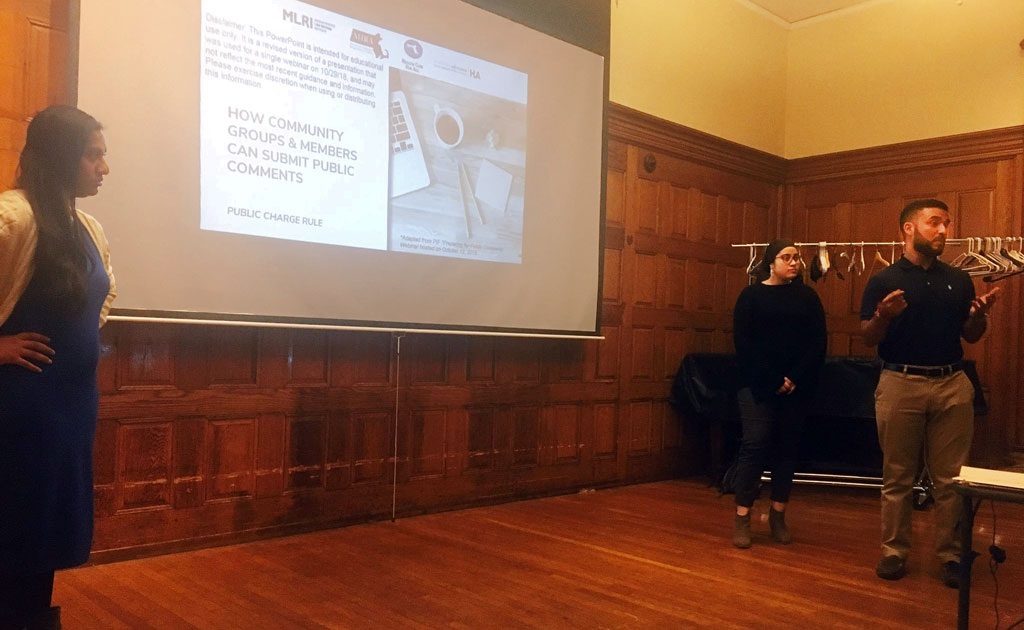 No change yet to law about low-income aid, but immigrant advocates see growing fear

Organizers from the Massachusetts Law Reform Institute take part in a Nov. 29 meeting at First Parish Church in Cambridge about proposed changes to a “public charge” law that’s worrying immigrants and their advocates. Click through to see the original image. (Photo: Yesenia Jimenez of MLRI via Twitter)

Local advocates for immigrants as well as the Cambridge Housing Authority, Cambridge Health Alliance and members of the city’s new Commission on Immigrant Rights and Citizenship fear that a Trump administration proposal to change immigration rules could be having a harmful impact on foreign-born residents with low income well before a decision on whether to adopt it.

On Oct. 10, the U.S. Department of Homeland Security proposed regulations that would make it more difficult for some immigrants here legally to change their status – such as applying for a green card or extending a visa – if they are low-income or getting help from certain federal aid programs. For the first time, those programs would include Section 8 rent assistance, public housing, Medicare drug subsidies and Medicaid – if the rules are adopted as proposed. The changes expand the definition of “public charge,” a term included in the 1952 Immigration and Nationality Act that barred admission and status changes for certain applicants who were likely to need federal financial support.

The fear is that just the proposal could spook anxious immigrants into leaving health and housing programs or to pass up applying, even if they wouldn’t be subject to the new rules. For example, the public charge criterion doesn’t apply to people who have refugee, asylum, victim of domestic violence and other special immigration status. But, said Nancy Schlacter, executive director of the immigrant rights commission, “People are anxious; they want to stop using benefits.”

An analysis published by the Blue Cross and Blue Shield Foundation this month estimated that the proposal could have a “chilling effect” on as many as 220,905 low-income non-citizens and family members, including citizen children, in the state. (The proposal lists having income below 125 percent of poverty as a negative factor in deciding whether someone is likely to be a public charge). An estimated 22,000 to 73,000 people from that group might actually give up or not apply for public benefits for which they are eligible, the report said.

Immigration advocates say the “chilling effect” may be twice as high as that estimate because income isn’t considered a positive factor until it’s above 250 percent of poverty.

It’s not clear how much chilling is already happening in Cambridge, where about 20,000 residents, or 18 percent of the total, were born abroad and are not naturalized citizens, according to the latest Census Bureau figures. (The figures do not specify how many non-citizens have legal status). At a Nov. 15 meeting for Alliance health care providers, several said worried patients had asked whether they should unenroll from federal programs. A Sept. 28 post on the WBUR CommonHealth blog from two Boston Medical Center doctors and Alliance physician Elissa Poorman recounted how one of their foreign-born patients struggled to afford food for her newborn son last year but was afraid to apply for food stamps.

An early version of the official immigration proposal leaked to the press in January 2017. At that time, Cambridge Housing Authority general counsel Sue Cohen provided a legal analysis to CHA commissioners. A Cambridge Day story about the issue sparked an effort by housing authorities nationwide to prepare materials to educate and protect immigrants living in federally subsidized housing.

Around the same time, the Alliance began including information in its monthly “Health Happenings” bulletin for Somerville assuring patients that “at this time [federal immigration authorities] state that foreign-born individuals will not be considered a ‘public charge’ for receiving various benefits … and participation will not affect immigration status.” The bulletin went on to list specific federal programs that had apparently been the subject of rumors, including WIC Nutrition Program, food stamps, school meals, food assistance programs, fuel assistance programs, housing benefits, child care services, Head Start, MassHealth insurance plans and other free or low-cost medical care.

The housing authority and immigrants’ rights commission have been reluctant to counsel immigrants directly about the proposed regulations; they’re too complicated, officials said. “Broad strokes are not necessarily the best thing,” said commission executive director Schlacter, adding that the commission hopes to present “a general 101” explanation to immigrants in the next few months. It would be a problem if people were “giving legal advice when they don’t know what they’re talking about,” she said, so the commission refers people to the city’s monthly immigration law clinic every third Wednesday at Community Legal Services and Counseling Center in East Cambridge.

Cohen, the housing authority’s head lawyer, brought a printout of the proposed rules to a commissioners’ meeting in September; it was several inches thick, so complex that she was relying on an analysis by a national public housing group to understand it. “We need to reconsider how this will affect our residents,” Cohen said.

Meanwhile, she has prepared a summary of how the proposal might affect Cambridge public housing residents and rent voucher holders, to distribute to development managers and others who communicate with residents. The housing authority might add information about the rules change to its website, Cohen said.

As of last year, 49 households getting CHA housing benefits in Cambridge had at least one foreign-born member who was undocumented; 1,210 public housing residents and voucher holders held green cards. Undocumented immigrants can live in federal public housing as long as one household member has documents; there are no citizenship requirements for state housing benefits, but the housing agency has been converting its state-funded housing developments to federal housing programs. Cohen said in September that managers reported only one question from a resident about the public charge proposal, and that person lives in state-funded housing.

The Health Alliance, unlike the other two agencies, has tried to communicate directly to reassure immigrants. Its website includes a pamphlet dated January 2019 titled “Immigration and Public Charge-related Resources,” with three statements on the front page: “1. Nothing has changed – yet. If it does change, it won’t be for a while. 2. You can keep your public benefits, or sign up for ones that you are eligible for. There are no penalties for using services at this time. 3. Advocates are fighting against the proposed changes.”

The Alliance also has opposed the proposal vigorously. Chief executive Patrick Wardell submitted a letter to immigration authorities warning that its adoption would “jeopardize the health of millions of legal residents.” Almost three-quarters of its patients have Medicaid, Medicare, the Children’s Health Insurance Program or are uninsured, and 38 percent speak a primary language other than English, Wardell wrote. Many others at the Alliance submitted comments in opposition, the health care system said. It issued a press release on Dec. 18 saying it “strongly opposes this proposal and is part of a national effort to urge that it be withdrawn.”

The city’s immigrants rights commission also participated in the effort to kill the proposed changes by co-sponsoring a Nov. 29 meeting at First Parish Church where organizers from the Massachusetts Law Reform Institute and Lawyers for Civil Rights explained the proposal and solicited comments opposing it.

“We have a dedicated immigrant advocacy group,” said Karen Lim, who sits on the commission and is a church member. About 25 people attended the meeting; none were potentially affected, Lim said.

Iris Gomez, an attorney and director of the Massachusetts Law Reform Institute’s Immigrants Protection Project, said in an email that the First Parish meeting was one of several dozen similar workshops held in the state by the institute and allied legal and health care advocacy groups. The aim was to get comments opposing the new rules, particularly from people who supported immigrants but might not know how to submit statements, she said.

Opponents of the changes wanted as many comments as possible partly because federal rules require the government to read and consider each comment individually, lengthening the approval process. The comments may also lead to beneficial changes in the proposal, or the government’s response to individual comments may provide a basis for lawsuits challenging rules that are adopted, Gomez said.