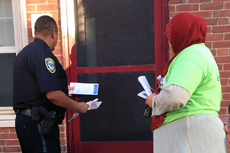 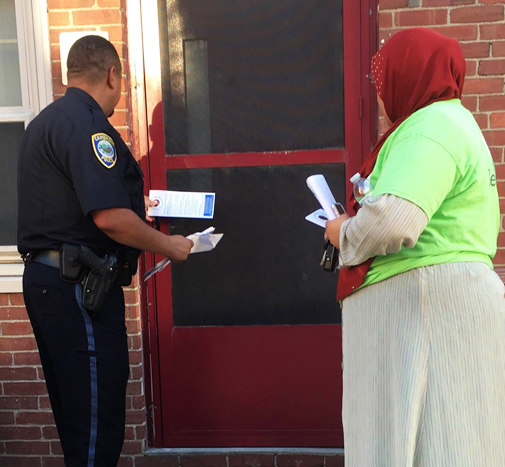 Cambridge Police Department officers and employees and Department of Human Services workers talk with a housing developments resident during a five-part door-to-door campaign to provide them with resources and address concerns raised by the policies of President Donald Trump. (Photo: Cambridge Police)

Cambridge’s Housing Authority is working with other housing agencies around the country to develop printed materials and strategies they can all use to communicate with and protect immigrants living in subsidized housing.

The agency’s general counsel, Susan Cohen, said the joint effort was sparked by a Cambridge Day story distributed nationally by a news clipping service that serves public housing authorities. The report described the Cambridge agency’s concerns about President Donald Trump’s threat to crack down on immigrants.

Specifically, agency executive director Michael Johnston said all public housing authorities were required to report the citizenship status of residents to the federal government. At present, 49 families in Cambridge public housing or getting federal rent vouchers have at least one member who is an undocumented immigrant, Johnston said; the reporting requirement means federal authorities have their names and addresses. Johnston and Cohen also said they were worried about the potential impact of a proposed executive order making immigrants, including those here legally, subject to deportation if they got government benefits within five years of arriving in the United States.

The order has not been signed, and Cohen outlined legal uncertainties about whether it would apply to those getting housing subsidies if it is ever signed.

Still, the story struck a chord with housing officials in other communities, Cohen told CHA commissioners at an April 12 meeting. As a result, “there is a lot of interest in putting together information for residents” that could be widely used, she said.

In an interview, she said the housing agencies “are trying to share resources.” The Council of Large Public Housing Authorities, a major industry group, “is starting to work on it,” along with authorities that, like Cambridge, have some freedom from strict regulation by the U.S. Department of Housing and Urban Development because of a record of high performance.

Officials at the Cambridge agency are also working with city government agencies on other issues related to immigration policy. Housing Authority representatives attend meetings of a panel of city officials established by Mayor E. Denise Simmons to discuss how to deal with the Trump administration’s threat to eliminate federal funding to communities that refuse to cooperate with immigration agents, Johnston said.

The housing agency is also helping the police department make door-to-door visits to residents in six developments this month, aimed in part toward reassuring immigrants that officers don’t pose a threat – an answer to police worries that fear will dissuade residents from reporting crime.

Police planned originally to distribute English-only fliers emphasizing that residents could rely on officers regardless of their immigration status, Cohen said. When CHA workers asked why officers weren’t providing the flier in other languages, police officials said they had no one to translate the material. The authority, which usually provides at least Spanish and Haitian Creole translations to its residents, offered to translate.