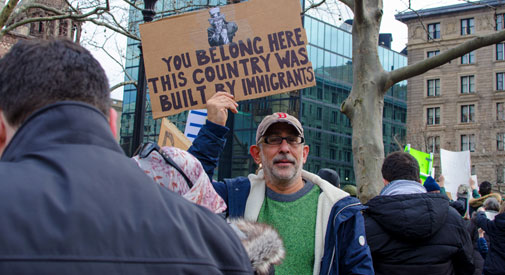 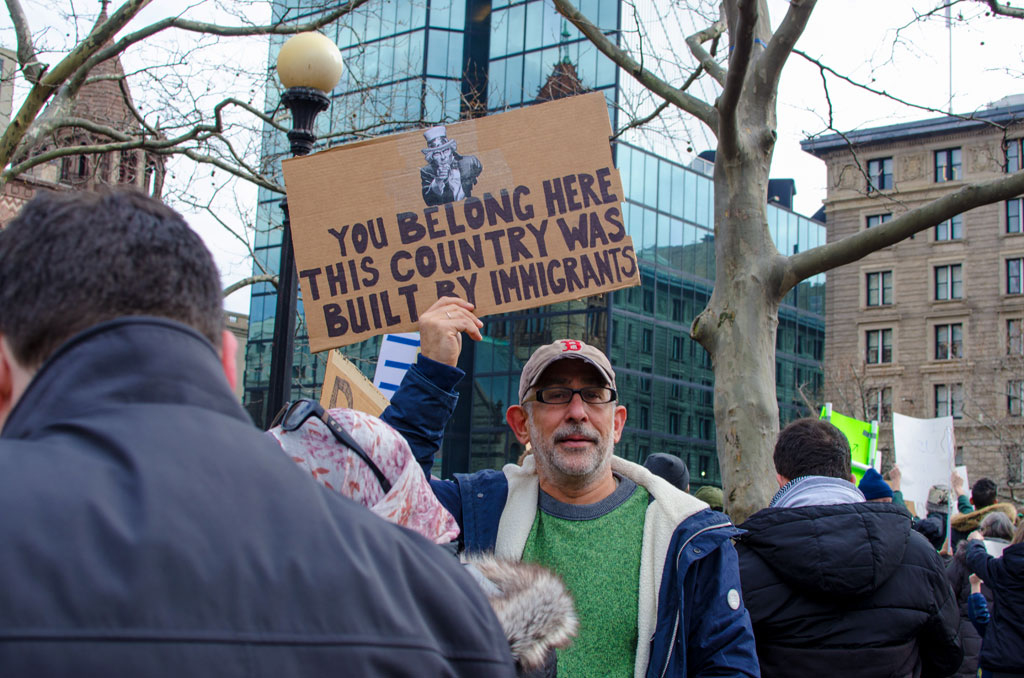 A protester makes his message clear at a January 2017 rally in Boston. (Photo: Kristin Shoemaker via Flickr)

The immigrant-protecting Safe Communities Act was filed again this week, bringing another chance for the state Legislature to do the right thing.

State Sen. James Eldridge and state Rep. Juana Matias filed the original act two years ago. Advocates, activists, attorneys and nonprofits whose mission is to support immigrants, including the Massachusetts Immigrant and Refugee Advocacy Coalition and Centro Presente, began long, complicated campaigns in support of the legislation, which had 56 co-sponsors, and hundreds of people – myself including – attended and spoke enthusiastically at an all-day State House hearing on a hot summer day in 2017. The support and excitement for this tool, designed to protect the most vulnerable in our communities, was palpable, including in Cambridge. As a Massachusetts liberal Democrat who has worked many years in support of immigrants to honor my late immigrant father, the legislation couldn’t have been voted on and passed by our Legislature fast enough.

That was especially true with the first attempted Muslim bans thrust upon Americans in July 2017, proof (alongside many other examples, including the intentional separation of children from their families on our southern border) of President Donald Trump’s xenophobia. Even Gov. Charlie Baker, who began the year against the legislation, seemed to waver as the year and Trump’s term ran on.

Naively, I expected the enemy of this legislation to be right wing Massachusetts Republicans such as Bristol County Sheriff Thomas Hodgson – I sat right next to Hodgson during the House hearing – and not Democrats in our House of Representatives, starting with House Speaker Robert DeLeo and enabled by the 11 chairs of House committees and DeLeo’s leadership organization. They refused to risk their position by urging DeLeo to call for a vote on the act, though it passed our Senate in March with a tense debate and a 25-13 vote.

Safe Communities Act 2.0 is pretty much the same. Language about barring a Muslim registry has been removed at the request of Muslim-American advocacy groups who thought it gave a false sense of security; the Massachusetts Supreme Judicial Court decision Lunn v. Commonwealth made a section on federal detention unnecessary, as it concluded that state law already “provides no authority for Massachusetts court officers to arrest and hold an individual solely on the basis of a federal civil immigration detainer, beyond the time that the individual would otherwise be entitled to be released from state custody.”

But the political climate also has not changed, and neither has the political math, and I’ve been told many times by many politicians or their legislative aides that they have been threatened (by, for instance, being put on obscure, unwanted committees) by Democrat leaders over their support of the SCA.

Here’s that political math: Trump won more than 90 communities in Massachusetts in the 2016 presidential election. There are many more cities and towns in Massachusetts where Hillary Rodham Clinton won by only a slender margin. DeLeo and his leadership are not calling for a vote on the act in part to protect those House of Representative Democrats in red and purple communities, choosing to protect fellow elected officials over vulnerable immigrants.