While most here worry about affordability, neighbor groups ask ‘How Big Is Too Big?’ 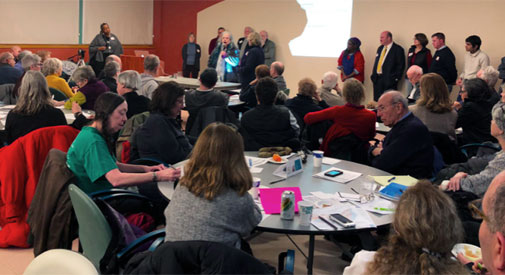 While most here worry about affordability, neighbor groups ask ‘How Big Is Too Big?’

Instead, let’s explore how we can regain our vanishing middle class
By Eugenia Schraa and Burhan Azeem 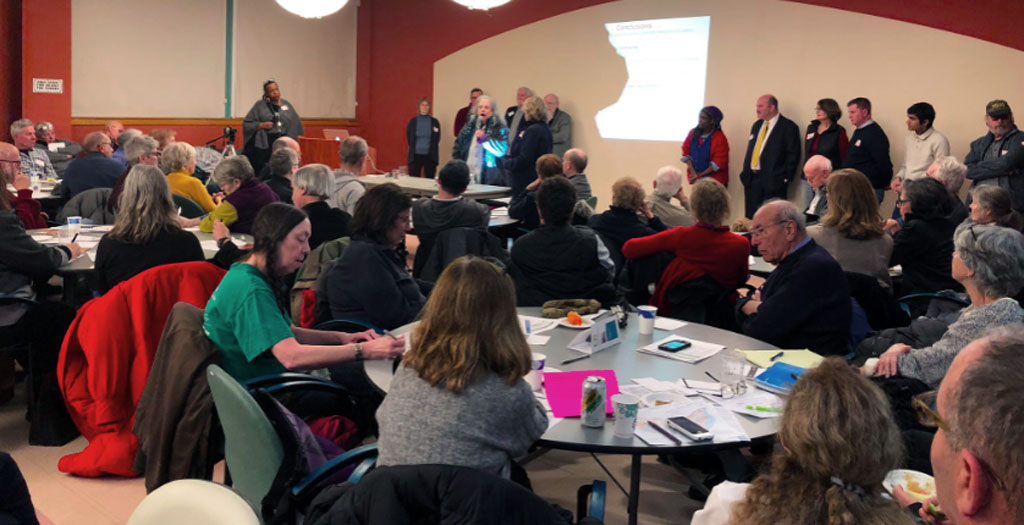 For most Cambridge residents, housing tops the worry list – by a lot. Affordable housing is the “dominant issue on people’s minds,” with 30 percent volunteering it as the city’s top problem, according to the most recent publicly available poll, from 2016. It also topped Cambridge’s 2017 Needs Assessment.

Contrast that with the issues raised at a recent gathering of Cambridge Neighborhood Associations. The event – which caused a stir by drawing more than 150 people, including five city councillors, and by featuring comedian-turned-political candidate Jimmy Tingle – relegated housing concerns to the “officially third tier,” to quote Cambridge Day.

So what ranks as most important to our neighborhood associations? One clue is the event’s title: “How Big Is Too Big.” Another is the list of the Associations’ top three concerns, as presented by the event organizers: “Climate: environment, trees, parks”; and in a tie, “Overdevelopment (too tall, too much)” and “Quality of life: parks, open spaces, light and noise, garbage, drugs on the streets, homelessness, arts, diversity, schools.” 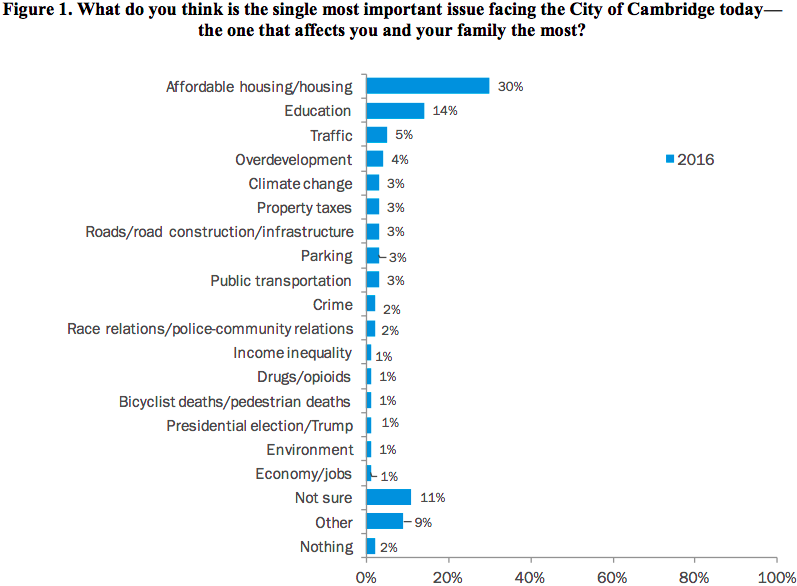 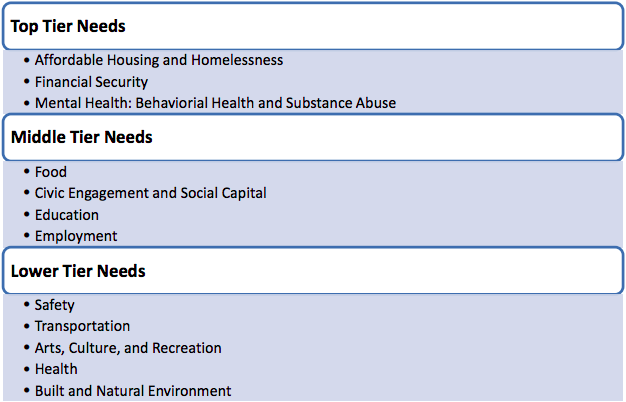 “How Big Is Too Big” not representative

As we discuss what this event means for the policies Cambridge should adopt, it’s important to note that the crowd wasn’t representative of the city as a whole. For one thing, as pictures of the event seem to indicate, the average age was retired and up – in a city where the median age is 30.2. To be clear, these groups have every right to express their views. But we must be mindful that representing our neighborhood associations does not mean representing our neighborhoods. Neighborhood associations attract members who tend to be much older than the average Cambridge resident, and who are more likely to own their own homes. (In fact, people who oppose new housing developments in Cambridge and the region tend to dominate public comment, according to Boston University research. Our public process for housing under-represents renters, people of color and lower-income residents.)

In addition, it should be noted that some attended the event to express opposing points of view, and that not all the neighborhood associations agreed with the “too big” sentiment.

The point is that we, as a city, need to balance viewpoints as we decide how much we should support building homes. The organizers of “How Big Is Too Big” did an excellent job of making a case that there are cons to building here. Nevertheless, we need to remember how many in Cambridge need housing urgently. Building more homes – especially affordable housing – is one important way to achieve that goal.

In discussing support for the notion that Cambridge may be “too big,” we should also note that high housing prices have already decreased Cambridge’s share of middle-class residents by over a third since 2000.

About 27 percent of residents were middle-class then, compared with just 17 percent in 2014 (see chart below). While these data aren’t current, the trend has almost certainly continued. As the city’s share of middle-income residents decreased, it was the share of the very rich that grew.

Limiting how many homes we build allows our city to become a gated enclave for the very rich. Asking “How Big Is Too Big” implies it’s okay that middle class people – teachers, firefighters, artists, small-business owners – can’t afford to live here.

Building more homes is also one of the best ways to reduce climate impact. When we limit housing in transit-rich Cambridge – where people can generally commute and do errands on foot, bike or by bus and train – that housing ends up getting built farther from the city and from easy transit. It’s sprawl. The result is that those people will depend more on cars for commuting and everyday getting-around. 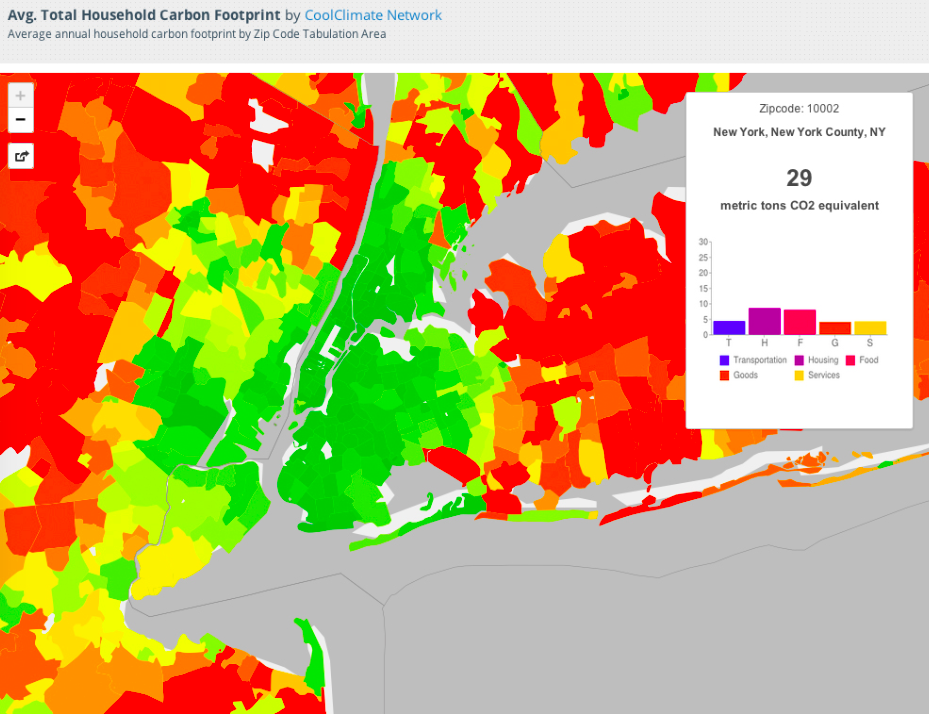 If you want Cambridge to be a leader in the climate change fight, you must advocate for increased home-building as the top priority. That doesn’t mean settling for a tree-free dystopian future. It means working trees into a sustainable development policy that benefits the entire planet. (Here’s an example of a 20 percent affordable, transit-oriented development of 100 units that promises just that: providing a larger tree canopy than exists and removing impervious surfaces to mitigate flooding concerns.)

Healthy tree and park numbers can follow strong home-building development; the opposite isn’t true. If we prioritize trees without thinking about housing, we’ll likely encourage sprawl and car pollution. Let’s instead prioritize trees as part of a holistic plan to make Cambridge the climate change leader it should be.

Is Cambridge living up to its progressive values?

Climate: Is Cambridge building enough homes so people aren’t forced to commute and run errands in polluting cars, instead of walking, biking or using transit, as is only feasible in a city?

Climate: If we put trees ahead of our concern for minimizing climate change, are we boxing ourselves in? If we put climate change first, can’t we also make sure we have full and beneficial tree coverage for all?

Equity: Is Cambridge building enough homes so the richest aren’t the only ones who can buy up the existing housing stock?

Equity: Is Cambridge building enough homes so the middle-class and a younger generation can hope to live here?

Equity: Is Cambridge doing enough to subsidize and support affordable housing so our city has middle- and low-income people contributing to its diversity and vibrancy?

Equity: Is Cambridge supporting zoning changes that will allow more affordable housing for middle- and lower-income people to be built?

Equity: If we continue to exclude middle- and lower-income people from Cambridge, will they be cut off from economic opportunity, increasing income inequality?

Eugenia Schraa is executive director of the A Better Cambridge Action Fund. Burhan Azeem is  chairman of the Cambridge Democrats’ Ward 2,. representing the Massachusetts Institute of Technology and The Port neighborhoods. Images were supplied by the authors.

The post was updated Jan. 24, 2019, to correct a description of the number of affordable units proposed at 55 Wheeler St.