Health Alliance will begin look for leader; Wardell to retire after seven years as CEO 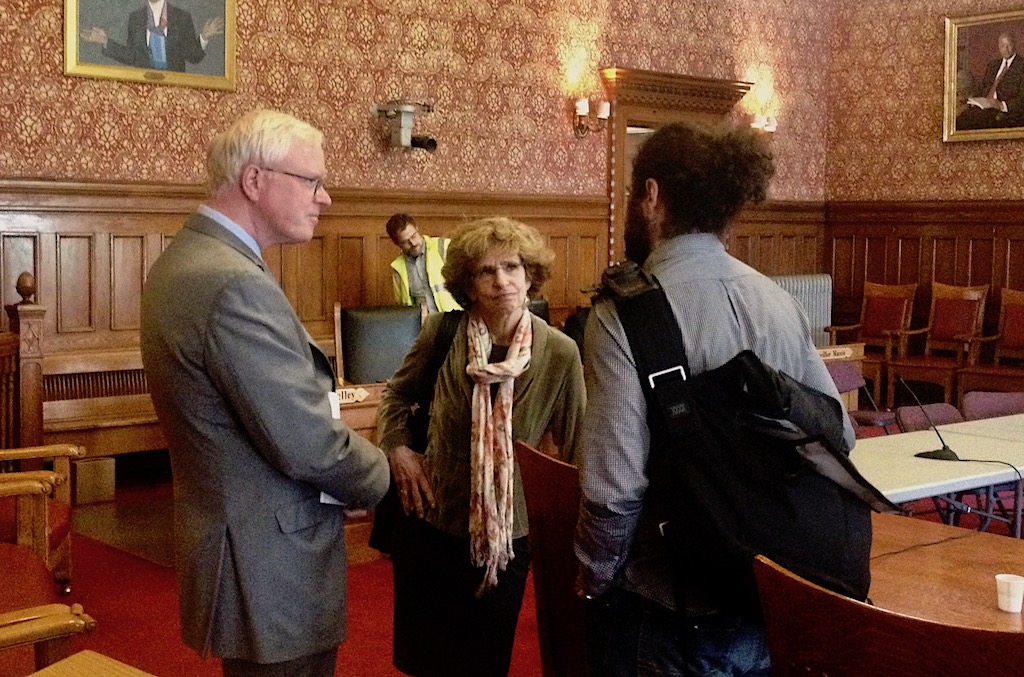 Health Alliance will begin look for leader; Wardell to retire after seven years as CEO

Cambridge Health Alliance chief executive Patrick Wardell visits City Hall in 2014 about the closing of a dedicated psychiatric emergency room at Cambridge Hospital; he will be back Tuesday to discuss a 2016 death outside Somerville Hospital. (Photo: Marc Levy)

Cambridge Health Alliance chief executive Patrick Wardell said Tuesday that he will retire in July after wrapping up an investigation into a death that took place outside the system’s CHA Somerville Hospital.

Wardell has led the Alliance since March 2012, in recent years ending a run of red ink for a system that now operates hospitals in Cambridge, Somerville and Everett and has clinics serving patients in Cambridge, Somerville, Malden, Revere, Everett, Chelsea and Winthrop. The Alliance is also a “public hospital” owned by the City of Cambridge, and a safety-net system that serves mostly low-income patients on Medicaid or without coverage.

Wardell came to the Alliance after leading Hurley Medical Center in Flint, Michigan, for six years. He brought Hurley from loss to surplus in two years, established programs and oversaw construction of an emergency center. At the Alliance, Wardell negotiated an affiliation agreement with Beth Israel Deaconess Medical Center and led an expansion into northern and western suburbs as well as bringing the Alliance to break-even financial status or better after years of losses – sometimes with tough and controversial decisions, including the closing of a dedicated psychiatric emergency room at Cambridge Hospital in 2014.

The death of Laura Levis, 34, early Sept. 16, 2016, has emerged as a setback for the health care system, which dodged questions about her death from Cambridge Day and, it has emerged, also didn’t disclose to her husband, Peter DeMarco, what had happened; he found out eventually from a police report.

Levis had walked from her nearby home to the hospital seeking treatment for a severe asthma attack. She called 911 after she found a door to the emergency room locked. A dispatcher telephoned the emergency room; a nurse looked outside briefly from the building but didn’t see Levis collapsed on a nearby bench, where ambulance medics found her in cardiac arrest. She died at Cambridge Hospital seven days later.

There has since been repeated meetings with DeMarco, stories in the press, the appointment of a special committee of trustees and separate hiring of law firm Foley Hoag to investigate the incident and response, with one report due March 15, and the calling of a City Council committee to explain CHA actions and report how the health care system is increasing transparency. That meeting has been scheduled for 10 a.m. Tuesday.

“I will continue as CEO through June and intend to lead us through the response to the Laura Levis tragedy, including the implementation of any recommendations by the appointed Board Special Committee,” Wardell said in a Tuesday letter to the health care system. “I believe CHA will be a stronger organization as a result of this process. I have great confidence in our staff and providers, senior leadership team and our board of trustees and know that CHA is well-poised for success in the future.”

For the 2018 fiscal year, the health care system bad operating revenue of $645 million and an operating loss of $1 million – but was expected to end the year with net income of $10.3 million from other sources. Projections for the 2019 fiscal year expect operating revenue of $674 million, an operating loss of $8.5 million and net income of $2.4 million. The system’s roster of health providers and support staff is expected to be the equivalent of  412 full-time providers and 3,269 support workers, handling 10, 734 inpatient discharges and 719,280 outpatient visits.

Wardell became eligible for a bonus for the first time just two years ago, when trustees gave him the full amount; in the past year he made slightly more than two-thirds of a 10 percent performance bonus. Wardell will retire with a base salary of $677,840.

The board will begin the process for identifying the next chief executive within the next several weeks, Wardell said.

“CHA is an exceptional place, and, after more than 20 years serving as the CEO of safety net organizations, I feel fortunate to cap my career here,” said Wardell, a resident of Lincoln but a native of Babylon, New York, who studied at that state’s Union College and Cornell University. “It is time to follow through on my promises to my family and spend more time with them, especially my new grandson.”