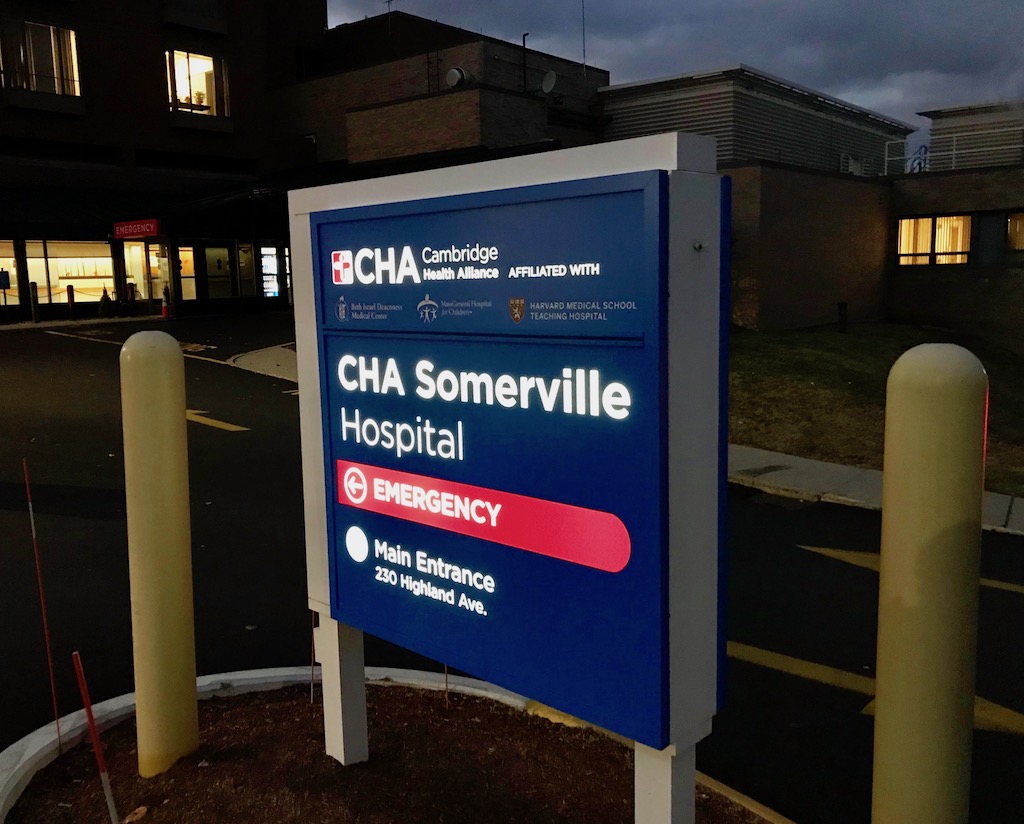 Cambridge Health Alliance has been cited for violations of federal safety and quality rules eight times in the past two years, more than any other hospital in Massachusetts during that period. The incidents range from a relatively minor lapse – allowing a psychiatric emergency patient to use the bathroom unobserved – to a major failure in which a woman died when she couldn’t find the entrance to the Somerville Hospital emergency room.

In that case, police notified the hospital that the woman was outside, short of breath and looking for the entrance in the early hours of Sept. 16, 2016, but no one went out to search for her in the dark, according to a report by the state Department of Public Health. An ambulance crew sent by police found her lying on the ground outside the hospital in “full cardiac arrest,” and she later died.

The state faulted the Alliance for not complying with a major federal law that prevents hospitals from turning away patients seeking emergency treatment, the Emergency Medical Treatment and Labor Act. It was signed in 1986 after growing numbers of complaints and news reports about patient “dumping” – hospitals rejecting patients without insurance or, in some cases, black patients.

The law requires hospitals to provide medical screening to anyone who seeks treatment in the emergency room and, if the patient does have an emergency, to stabilize the person or make an “appropriate transfer” to another facility.

According to the state report, the Alliance initially didn’t think the incident violated the law because the woman wasn’t in the emergency room and therefore was not a patient. But a federal “guidance” says the law is triggered if a patient is anywhere on hospital property, said Marybeth McCabe, of the DPH Bureau of Health Care Safety and Quality.

Alliance spokesman David Cecere declined to answer questions about that incident and wouldn’t discuss details about any other cases, citing patient privacy. The Alliance’s plan to correct the violations at the Somerville Hospital emergency room included language denying any admission of wrongdoing.

The plan called for emergency room staff to communicate and work more closely with hospital police officers stationed in emergency rooms at all three Alliance hospitals; two officers were in the Somerville Hospital ER when the nurse got the call from police in 2016, but no one asked them to search outside. McCabe said the hospital had also improved lighting in the area by the time state investigators arrived two months later.

The Alliance includes Cambridge Hospital, Somerville Hospital, CHA Everett Hospital and 15 doctors’ offices in Cambridge, Somerville, Revere, Malden and Everett. It ranks second in Massachusetts in serving low-income patients on MassHealth or the uninsured, and is a major provider of psychiatric treatment.

“CHA actively promotes a culture of safety, employing a rigorous process through which we identify ways to improve how we deliver care,” Cecere said in an emailed statement. He noted that the system is accredited by the Joint Commission, a private organization that is the nation’s major assessor of hospital quality and visits hospitals at least once every 39 months.

Referring to the number of state inspections that found violations at the Alliance in the past two years, Cecere said there isn’t “a correlation between the number of (Department of Public Health) site visits to our facilities, which, unlike other health systems, are grouped under a single license, and the exceptional quality we deliver.”

The state Department of Public Health inspects hospitals on behalf of the federal agency that administers Medicare and Medicaid – the Centers for Medicare and Medicaid Services – as well as its own state licensing procedure. There are rarely any fines for federal violations, but if a hospital can’t correct its deficiencies, CMS could eventually refuse to pay for patients with Medicare, a major and potentially fatal financial blow. The Alliance remained far from that position, and state officials have accepted its correction plans for all the violations.

Despite its violations, the Alliance compares well with others in Massachusetts and nationally on measures of quality and patient safety. It meets or exceeds the scores of other hospitals on Medicare’s Hospital Compare website for most measures of medical care. The only area where the Alliance falls short is patient satisfaction, where it got three out of five stars. For example, fewer CHA patients than those at other hospitals say their bathrooms were clean, that their nurses always communicated well and that they always received help as soon as they wanted. Sixty-five percent of Alliance patients rated their hospital 9 or better on a scale of 10, compared with the state average of 72 percent and the national average of 73 percent.

Cecere said the Alliance encourages employees to report problems and discloses to regulators “unanticipated situations … that may lead to an adverse outcome.” Complaints spurred all the CMS-ordered inspections for violations in 2016 and 2017.

In one case, it was employees who made the complaint, but only after those CHA nurses spent frustrating months trying to get administrators to correct understaffing in the Cambridge Hospital continuing care nursery, which cares for babies who are mildly to moderately ill, said Susan Wright Thomas, a Massachusetts Nurses Association representative and a postpartum nursery nurse at the hospital. Only one qualified nurse was assigned to the unit, the state investigation report said, leaving the nursery unstaffed if he or she called in sick and couldn’t be replaced with another specially trained nurse.

The nurses complained to managers, even to an internal ethics committee for the hospital, Thomas said. “We asked for more staff. We were told we couldn’t get them,” she said. Finally, when a supervisor insisted on admitting a woman in labor whose newborn would probably need special care, even though the manager knew the nursery wouldn’t be properly staffed that night, the nurses decided to go to the state, Thomas said.

“We didn’t want to hurt the hospital, but we were at the point where we didn’t know what to do – somebody was going to be hurt and we didn’t want it to happen on our watch,” she said.

According to the inspection report, the nursery shut down abruptly one night in February 2016 and had to turn away mothers in labor and transfer newborns. There was a second shutdown in March, and after the state inspection, the hospital closed the service for a period that Cecere wouldn’t specify while officials “assessed our policies, processes and addressed our training needs,” he said.

The state blamed people at the highest level for violating the rules; it cited the Alliance board of trustees and chief executive Patrick Wardell for not ensuring adequate staffing. Thomas praised the response after the visit from regulators. “The hospital did move quickly to start addressing the issues,” she said.

“To the hospital’s credit, they have spent a lot of money and a lot of effort on improving the situation,” she said. “They put a lot of work into education.” 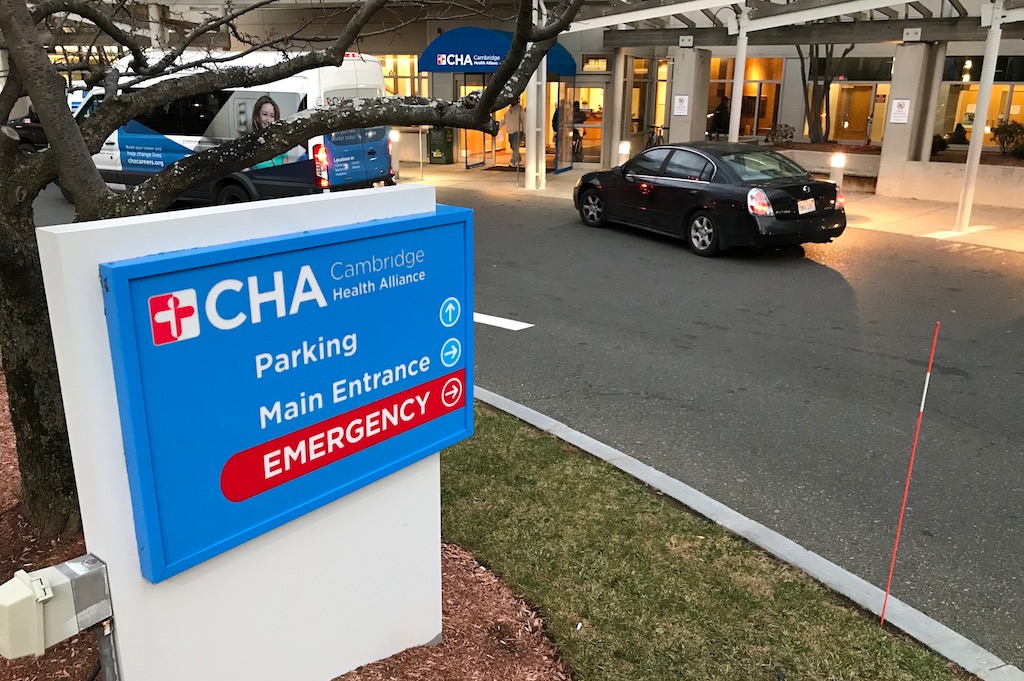 Suicide risks and other lapses

Other lapses cited by the state included allowing non-employees who were not vetted by the Alliance to evaluate psychiatric emergency patients at Cambridge and CHA Everett Hospitals; giving medication to a psychiatric patient without a record that the patient had been informed of risks and benefits and consented; and not assessing whether another mentally ill patient had suicidal thoughts on the day the patient committed suicide in the Cambridge Hospital adult psychiatric unit.

The state investigator visiting the hospital after the Aug. 25 suicide noticed handles under the mattresses on hospital beds, hooks on the wall and other protuberances that patients could use to kill or hurt themselves, the inspection report said. That led to another citation, for not maintaining a safe environment. The report didn’t say how the patient who committed suicide on Aug. 25 did it, and Cecere didn’t answer the question.

Workers removed the hooks and other potentially dangerous items as soon as the investigator pointed them out, but replacing the 50 beds will take longer, perhaps until July, according to the report. Meanwhile, clinicians in the unit will assess patients for the potential to harm themselves using the handles, which are attachment sites for restraints, the report said.

The state inspection reports are public records, but they are scarcely well-known. Until five years ago, members of the public couldn’t see them without filing a Freedom of Information Act request. In 2013, a reporters group, the Association of Health Care Journalists, reached an agreement with CMS that allows the association to post the reports on the Web. The site, hospitalinspections.org, is searchable and includes reports dating back to January 2011.

Even so, it can take up to 90 days for a report to be released, and the association updates its site quarterly. The reports themselves can be difficult to understand – heavy with legal language referring to Medicare “Conditions of Participation,” the technical description of safety and quality standards that hospitals must meet to be paid for treating Medicare patients.

The Leapfrog Group, an organization of large employers dedicated to improving health care quality, gives Cambridge Hospital a grade of B and CHA Everett Hospital A. Somerville Hospital was not ranked, perhaps because it has no inpatient services.

It’s not clear how well any tool such as Hospital Compare, Leapfrog and Joint Commission and investigation reports predict how well someone will be treated at a specific hospital.

The Joint Commission accredits most hospitals in three-year cycles and makes unannounced visits at least every 39 months before a decision. It’s a private nonprofit organization: Hospitals pay a fee to be accredited and pay the living expenses of the surveyors who examine them. It does not disclose details of its hospital inspections, but does publish performance statistics on some quality and safety measures. Hospitals must report on those measures every three months.

Accreditation is doubly important to a hospital. Accredited hospitals are “deemed” to be in compliance with federal licensing requirements so CMS doesn’t require them to undergo routine inspections. In addition, the state health department doesn’t inspect hospitals routinely under state licensing requirements, though the agency may choose to consider state mandates along with federal rules when its inspectors visit a hospital in response to a complaint.

The lengthy list of documents that Joint Commission surveyors expect to get from a hospital includes any state or federal regulatory reports.

CMS, the federal agency, has reported that the Joint Commission and other private accreditation groups don’t always catch all the deficiencies detected by state agencies. The agency measures the “disparity” between the accrediting organizations and state agencies annually by having state investigators visit a sample of accredited health care organizations 60 days after an accreditation inspection and calculating how many serious violations the accreditor missed.

In 2015, the most recent year measured, the Joint Commission had a “disparity rate” of 36 percent. There were 89 hospitals in the sample; Joint Commission surveys missed serious violations found by state inspectors in 32 hospitals, the CMS report said.

Find out more about quality at hospitals

These are websites that offer tools for checking and comparing quality of care and patient safety at hospitals. Click on bold-face names to visit.

Hospital Inspections: Reports of state inspections of hospitals for violations of federal safety and quality rules.

Leapfrog Group: Grading and comparison program offered by the Leapfrog Group, founded by large employers to improve quality of care and patient safety.

Quality Check: Ratings from the Joint Commission, which accredits hospitals.

State Quality of Care Report: The state’s Center for Health Information and Analysis’ latest report on quality of care statewide. Individual hospital reports can be found in the CHIA Databook for the report.