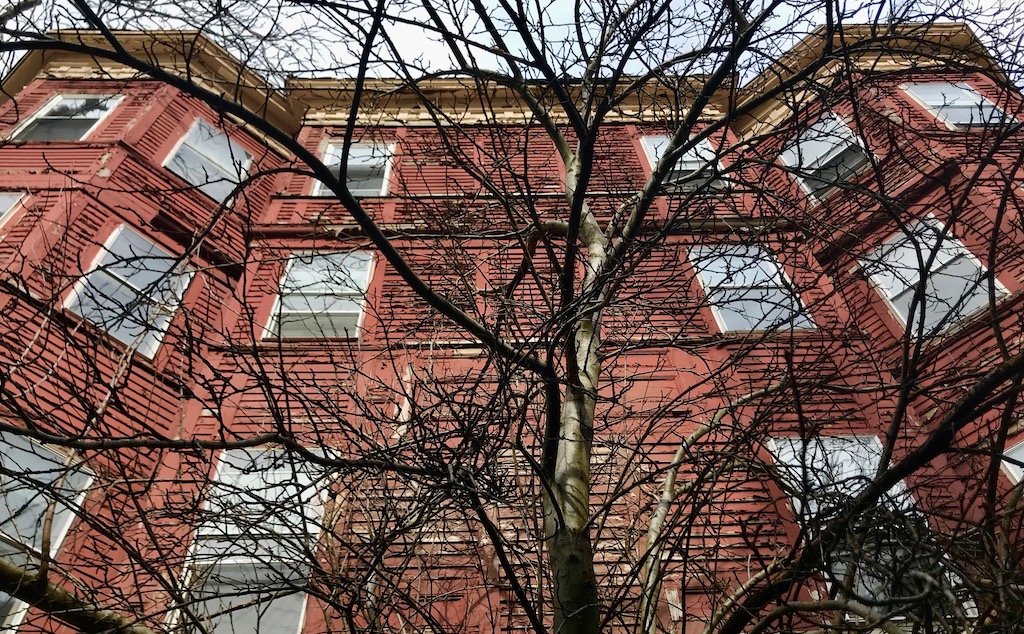 The long-empty building at 12 Arnold Circle is involved in cases in Middlesex Superior Court and Land Court. (Photo: Marc Levy)

The struggle over the fate of a deteriorating apartment building in Mid-Cambridge has taken a turn – one that could threaten the city’s inclusionary housing rule. The building owner wants a judge to declare the ordinance illegal as he seeks to sell the property to a developer.

Kenneth Krohn, the 80-year-old owner of 12 Arnold Circle, has filed papers in two state courts arguing that the ordinance imposes a form of rent control, which was outlawed after a statewide referendum in 1994. The ordinance requires that certain new construction projects include at least 20 percent of units that are affordable to low- and moderate-income residents. The city has declared that Krohn’s building, if rehabilitated, would be subject to the requirement.

The ordinance ”constitutes an arrogant but ultimately doomed attempt by the City Council of Cambridge to resurrect rent control in Cambridge,” Krohn wrote in a Land Court filing. He cited the state law outlawing rent control, which defined it as “any regulation which in any way requires below-market rents for residential properties.” 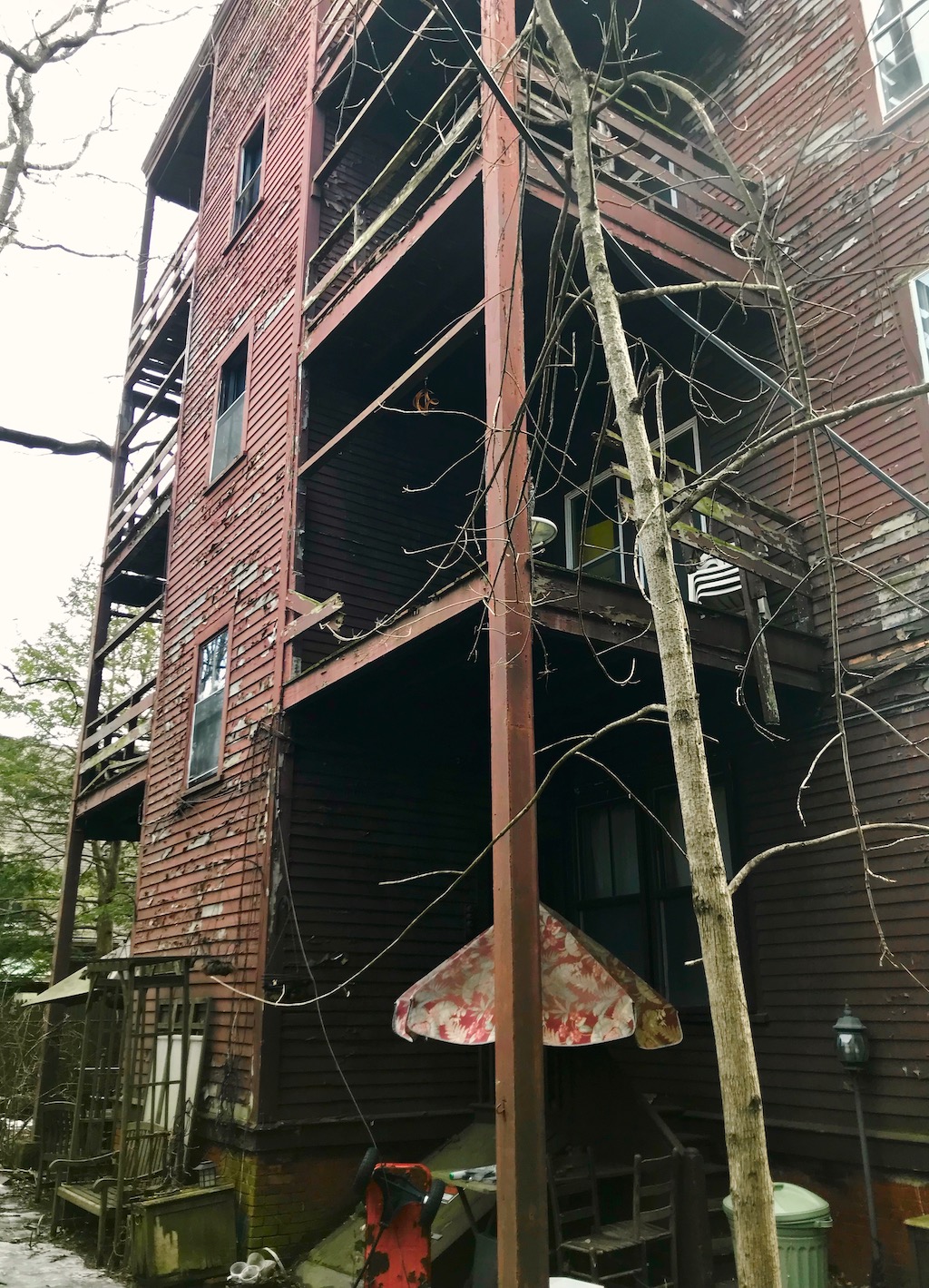 Little design change has been proposed for the outside of 12 Arnold Circle aside from new decks. (Photo: Marc Levy)

The earliest hearing on the issue is April 10 in Middlesex Superior Court, one of the courts considering Krohn’s move. The other court, Land Court, hasn’t scheduled a hearing, but a status conference is set for May 22 by telephone.

While the legal dispute continues, developer Edward Doherty has applied for a building permit to rebuild the structure. The March 27 application describes the project as a “gut rehab” and estimates it will cost $1.4 million. The plan calls for little design change to the outside of the building except new decks.

Doherty has agreed to pay Krohn $4.6 million for the property – Krohn bought it in 1974 for $95,000. Krohn will get an additional $1 million if a judge rules that the building isn’t subject to the inclusionary housing ordinance.

Krohn’s legal offensives in two courts aim to overrule a Nov. 29 decision by the city’s Board of Zoning Appeal upholding a city ruling that 12 Arnold Circle is covered by the ordinance. Krohn also wants a judge to give him permission to sell the building.

The legal maneuvering has become byzantine, creating confusion about the parties’ motives. The city opposes the sale, arguing that Krohn’s deal with Doherty doesn’t call for speedy repairs to the building despite the hazard to neighbors and firefighters. Neighbors have watched the neglect of the building for years; last May a rotten tree on Krohn’s property fell and damaged two adjacent properties.

Receiver wants to hang it up

The city wants the sale to be made by a receiver who was appointed last year to fix building violations, and the city’s court filing asked the judge to order the receiver to make repairs. Krohn has suggested in one of his filings that the city’s real motive is to prevent his getting the extra $1 million.

Now the receiver, Daniel G. McAuley Jr., has asked to resign. Last year he suggested that Krohn and developer Sean Hope, who previously wanted to buy the building, reach an agreement similar to the one with Doherty. It never happened, and Hope’s financial backers withdrew after the Board of Zoning Appeal decision. Krohn now owes Hope an undisclosed amount of money, according to his court filings.

The 12-unit building has been empty since at least 2012. The previous year, the fire and inspectional services departments had found the building filled to the brim with Krohn’s books, papers and other possessions, and cited a leak and structural defects; Krohn and his wife moved out after the city ordered the building’s utilities turned off.

Krohn, a respected mathematics scholar whose career also included three years in federal prison for extortion, has a law degree but couldn’t get permission to practice law mostly because of his record. He has fought the city in state and federal courts acting as his own attorney.

He has acknowledged that he had for years used the entire building to store his belongings while living there. And he said he didn’t have the money or physical ability to meet the city’s schedule for cleanup and repair.

After what the city said were several missed deadlines, the city sued Krohn in Middlesex Superior Court in 2016 seeking to enforce its orders. Krohn removed the case to federal court, where a judge appointed a receiver with authority to remove the violations, over Krohn’s objection. Then last September, after Krohn asked the federal judge to overrule the city Board of Zoning Appeal, the judge sent the case back to state court.

The building continues to deteriorate as the court fight continues. After the tree fell during high winds last May, affected condominium owners and the building insurer at 10 Arnold Circle sought unsuccessfully to have Krohn pay the cost of repairs. Krohn’s court filings say he disputes that he is responsible for the accident.

Until now, Krohn hadn’t broadly attacked the legality of the inclusionary housing ordinance as he sought to sell his property without strings. He and Hope, the previous potential buyer, had argued only that 12 Arnold Circle wasn’t subject to the rule because the period when the building was vacant started before the ordinance was approved on April 3, 2017. (New construction of 10 units or more in buildings that have been vacant for at least two years is covered). Krohn also said he and his wife stayed overnight occasionally at the dilapidated building, carrying in pails of water, and that he kept his toothbrush there.

The Board of Zoning Appeals rejected both claims, but last week’s building permit application preserves the vacancy claim. Doherty answered “No” to a question of whether the building had been vacant for two years. Krohn might have lost the ability to make the vacancy argument if the application had been filed after April 3 – two years after the ordinance was adopted.