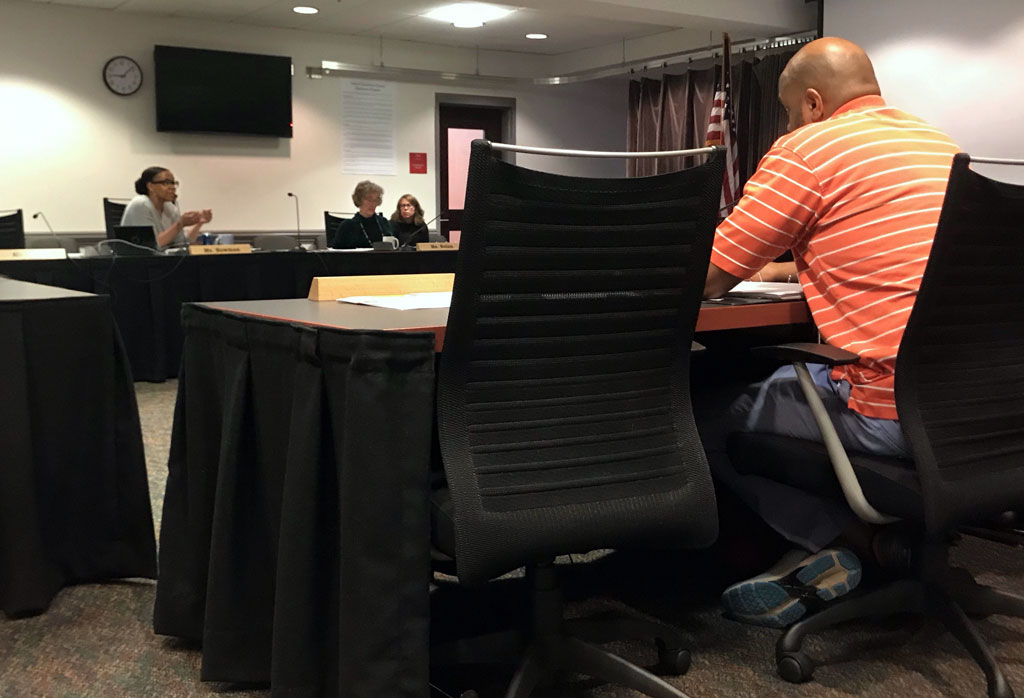 Manikka Bowman says Tuesday that she has been insulted by a conversation about race and test outcomes. Fellow School Committee members Patty Nolan and Laurance Kimbrough listen. Photo: Marc Levy)

A look at whether elementary school test goals should be different for some students of color is headed to a summertime workshop or School Committee retreat, in part because education officials’ conversation about racial equity on Tuesday veered into complaints of racial insensitivity.

“The way in which my colleague talks about black and brown kids in front of black and brown people as if we’re not here and were not invested, it’s inappropriate,” committee member Manikka Bowman said at a public meeting, wondering how anyone in the district could expect to hold dialogues about race if the School Committee itself “can’t get it right.”

Mayor Marc McGovern reminded Bowman to “keep it general” rather than to criticize a fellow committee member directly, and said the clash showed why it was better to set aside time for a focused conversation rather than take up the topic of test goals in a committee meeting where it would be just one of several agenda items.

A workshop or retreat was also how goals were set previously, McGovern said: “There was a conversation. It didn’t happen on the floor through a motion.”

The topic arose during the spring’s school district budget process, when it was observed that there were differences in goals between white children and for some children of color in MCAS standardized testing for categories such as eighth-grade math and third-grade reading. The motion presented Tuesday for consideration, but deferred to a more in-depth summer conversation, asked for “equal strategic outcomes for all subgroups with support from families, educators and [Cambridge Public Schools] administration,” and it came from black and white committee members: Its lead author was Laurance Kimbrough, a black man elected in 2017 on a platform that was explicit about ridding the district’s schools of systemic racism; co-sponsors were Emily Dexter and Patty Nolan, who are white.

“I was surprised that the committee chose to have different outcomes for certain subgroups as part of the strategic outcome,” and curious to hear from officials involved in setting outcomes “if there was any concern” about racial equity, Kimbrough said.

Superintendent Kenneth Salim reminded the committee of the lengthy districtwide goal-setting he did upon his arrival in Cambridge in 2016.

“What we did at the time was to really use the principle of ambitious but attainable targets … it was important to set targets for a three-year plan that would allow us to measure our progress,” Salim said. “We’ve had experience through the No Child Left Behind law that was passed in 2001 that having 100 percent as a goal for everyone isn’t necessarily what’s going to change behavior and actually be operational.”

“I hear the concerns folks share that it feels as if we have lower expectations for some students than others. That’s a very real tension between what I see as our aspirational versus operational goals,” Salim said. But the policy was not set “without a lot of really robust discussion.”

The long-term policy of the district has also been hostile to the idea that a standardized test is the only or best measure of a student’s worth – a policy still in place Tuesday as the committee passed a motion that could nudge the entire state toward finding other and more “innovative systems of assessments.” Concerns about over-reliance on the MCAS was raised Tuesday by Salim and McGovern.

But test data showed that some subgroups had already exceeded expectations, Nolan pointed out. Wouldn’t it make sense to update the expectations? “We had expected in three years to have only 25 percent of African American or black students be proficient in eighth-grade math. And in one year we went from 10 percent to 30 percent,” Nolan said. “If our goal is 25 percent two years from now, we could backslide [yet still] meet the goal.”

Salim was reluctant to change goals based on a single year of data, especially because the district was navigating with numbers from the very first year of a new MCAS test. “I would never claim victory or failure based on one year,” he said. “It gives us a snapshot … we know there are going to be fluctuations from year to year.”

When Nolan pushed back about “expecting 75 percent of white students to do something and only 25 percent of black and African American students,” Bowman bristled. She had already said she was insulted by Dexter bringing up comments by Leslie Brunetta, a white Cambridge resident who has been vocal on the topic, in support of her own belief that having differing goals by subgroups was “indefensible.”

“As a woman of color, I really get sick of particularly progressive white people chastising people of color, particularly myself, as it relates to my expectations of black and brown kids. So if we want to have a conversation about looking at our goals and saying, ‘Hey, we achieved them, let’s now maybe push those up based on the success that we made,’ I’m totally okay with that – because that is what you do with goals. But to sit and say that because I voted on it I had lower expectation for people that look like me is insulting.”

It has been a touchy year for race issues on the committee. When Dexter and Kimbrough were invited to a class panel discussion on race issues by a black teacher, Dexter repeated the instructor’s use of a racial term. Though it seemed to go unnoticed at the time, she later asked to come back to the class to apologize; the visit seemed only to exacerbate things. Bowman made a formal motion to investigate the issue, later modified to be an “objective fact-finding review” as people of color such as author Randall Kennedy – and Kimbrough – came forward to say Dexter was quoting the term rather than using it to attack. Students from the class have complained that the controversy stole attention from the work they’d been trying to do.

Nolan came in for criticism from Bowman during the vote to investigate after reading an email from civil rights activists and educators Janet and Bob Moses, who are black, defending Dexter.

“What just happened in this moment, with my colleague reading letters as a white woman from black people to defend a white woman using the N-word is … tone deaf, and it perpetuates systematic racism in a way that is incredibly hurtful. I could not let this moment pass without saying that out loud,” Bowman said. “It was completely inappropriate, and completely tone deaf.”

This post was updated June 11, 2019, to clarify Laurance Kimbrough’s leadership on a committee motion and that Emily Dexter asked to return to address a high school class.