Affordable housing overlay is tabled quietly after year of fiery debate, but due to return 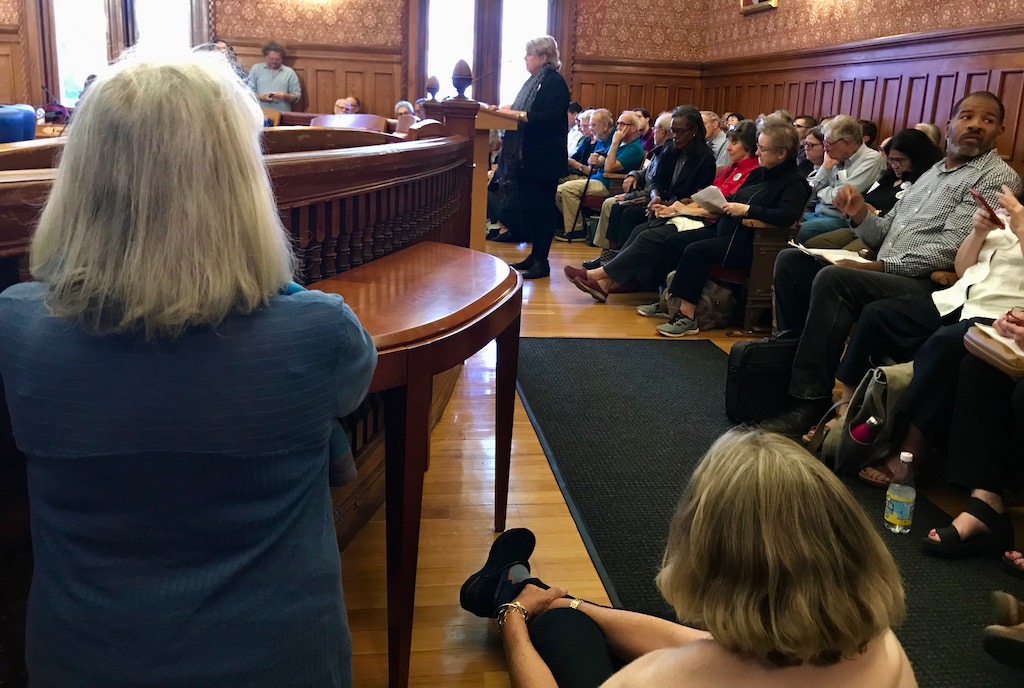 Affordable housing overlay is tabled quietly after year of fiery debate, but due to return

A proposal for a citywide affordable housing overlay slunk off to sleep Monday, overshadowed by a five-hour special hearing about East Cambridge’s former courthouse – and coming more than seven hours into an epic City Council meeting as basically an afterthought before it wrapped up some 15 minutes later with minutiae such as the approval of committee reports.

The proposal was formally tabled, with the intention of the bedraggled council being to let time pass until the zoning expires Sept. 30. There was no will to send it to a second reading and closer to becoming law; and councillors feared that voting against a second reading would mean a two-year period when they would be barred from considering another citywide affordable housing plan. (State law actually says that rejected zoning could return within two years if recommended by the Planning Board.)

Update on Sept. 11, 2019: City solicitor Nancy Glowa confirmed that state law says bringing similar zoning would be blocked for two years only if two things were true – if there was “unfavorable action” on the petition by the council and there had “not been a favorable Planning Board recommendation.” Neither of these are true on the overlay, which the Planning Board  ultimately favored, 6-3, at a Sept. 3 meeting. “If I said otherwise, I misspoke,” Glowa said of her Monday advice to the council.

The entire conversation Monday among councillors was procedural, rather than on the merits of the zoning. But housing advocates the next day were not feeling resigned.

“We’re incredibly disappointed,” said Eugenia Schraa, chair of the ABC Action Fund – the political arm of the “yes-in-my-backyard” housing advocacy group A Better Cambridge, whose members were preparing for a Wednesday candidates forum for the November municipal elections. “Part of our platform is support of the overlay, and all of our candidates support the overlay.”

“Many councillors fought very hard for it, but we have a regressive system that needs a supermajority [of six out of nine councillors] to pass the zoning, and we only had five,” Schraa said.

Suzanne Preston Blier, a founder of the new Cambridge Citizens Coalition group and not a supporter of the overlay, said Tuesday that hearing the zoning be tabled after a year of controversy and divisiveness – not to mention the roller coaster of attending meetings to see more than 40 amendments debated along the way – was “stunning. I didn’t expect it at all.”

“I was surprised as most people were that the council tabled it after so much work went into it,” Blier said, “but I’m pleased the council made that decision. It’ll give people on both sides an opportunity to reflect on it.”

It was an anticlimax to a proposal that has roiled the public for a year, bringing emotional public comment to a seemingly endless series of meetings, a stream of controversial flyers and plenty of debate among the public and officials. In November, councillor Quinton Zondervan and vice mayor Jan Devereux even passed a policy order seeking to downplay the overlay because argument about it was overshadowing the bulk of the Envision Cambridge master planning process.

Attention on the overlay and a couple of other ideas, already drifted back into obscurity while the overlay remained a lighting rod, “has caused considerable and unfortunate confusion among many members of the community, some of whom do not seem to realize that Envision Cambridge is much more than this trio of specific zoning ideas,” the councillors wrote.

The overlay actually dates back to a council order from October 2014, which went to councillor E. Denise Simmons’ Housing Committee the next year and was adopted in 2017-18 by the Envision Cambridge Housing Working Group as one of the master plan’s 175 recommendations – still yet to be taken up by the council. It was back early this year to the committee, where leadership is now shared with councillor Sumbul Siddiqui, and become full-fledged proposed zoning in the spring, when discussion switched to the Ordinance Committee led by councillors Dennis Carlone and Craig Kelley.

From the Ordinance Committee

Even from his leadership position, Kelley said he hadn’t realized the zoning was so lacking in votes to go down so quietly.

“I was pleasantly surprised,” Kelley said, considering the anxiety and tension – and emails – generated by the topic over the year. “At the last moment, people realized we’re sort of stalled here … but the way this ended was super positive for the city. I worried we’d get to this point and there would be a lot of vitriol and name-calling, and as a body there wasn’t any ‘I told you sos.’ It ended in a place none of us wanted to be, but in a good place to continue the discussion, and I think that’s a success.”

“I have an awful lot of admiration for people who had a lot going on and held their emotions in check,” Kelley said.

Carlone was not a fan of the zoning, which he estimated Tuesday might have brought him to as many as 15 meetings on the topic, including one series of four committee hearings that ran about 21 hours in total.

“People just realized it was a bad proposal,” Carlone said of the tabling. “Even when it was in the Housing Committee, I said there’s no way this is going to work. It’s the antithesis of good zoning, good planning and good design.”

The city “had a list of 30-odd ways to get more housing, and they went after one,” Carlone said.

The zoning proposal would have allowed developers to escape some height, density and parking requirements, as well as other mandates in the current zoning rules, to build projects where every unit is affordable to low- and moderate-income tenants, and Planning Board recommendations would have been advisory, removing neighbors’ clout. Supporters said it would help affordable housing developers get necessary approvals faster, cutting their costs and need for subsidies, and allow them to better compete against market-rate builders for available housing sites. The overlay would also allow affordable housing to be built in neighborhoods that are now off-limits because multifamily buildings are not allowed or severely restricted; the relaxed rules would have applied citywide except in open space districts.

Opponents said the changes could lead to skyrocketing density, incongruous building heights, a flood of new residents, destruction of neighborhoods and possibly displacement of current lower-income residents while ignoring issues such as the need for middle-income housing and saving trees.

The proposal was notoriously explicit about not being able to promise that new affordable housing would result.

Meanwhile, the city has “done nothing – we’re hanging on to our properties,” Carlone said, pointing to city-owned parcels such as parking lots in Central Square where a wealthy city could move parking underground and build affordable housing overhead.

Schraa, though, said there was nothing wrong with the overlay zoning as proposed, which was created with local builders of affordable housing. A Better Cambridge members see the problem as being with officials who “put the fear of change over the need to make a difference.”

“It cannot be changed much,” Schraa said of the overlay zoning. “We need to to elect a new council to pass this.”