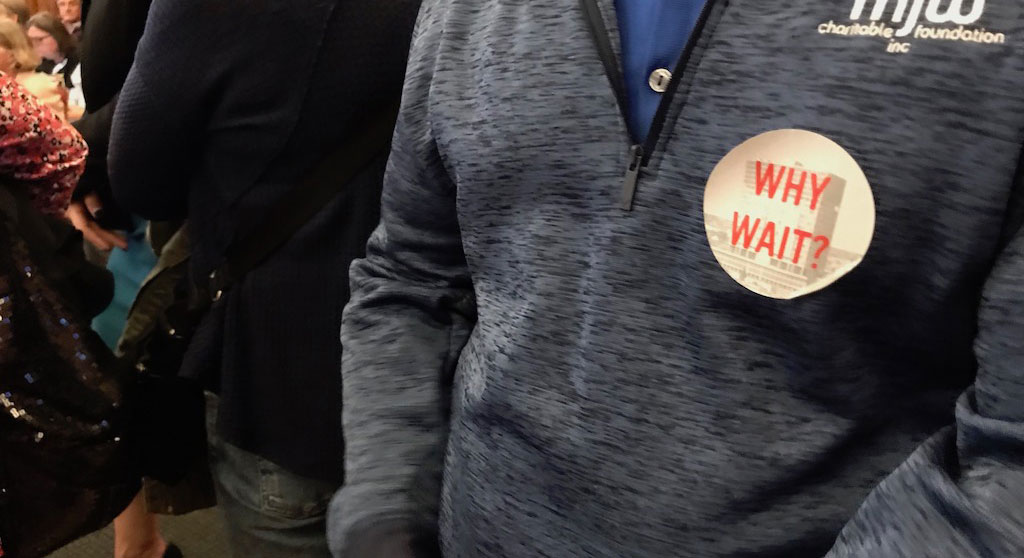 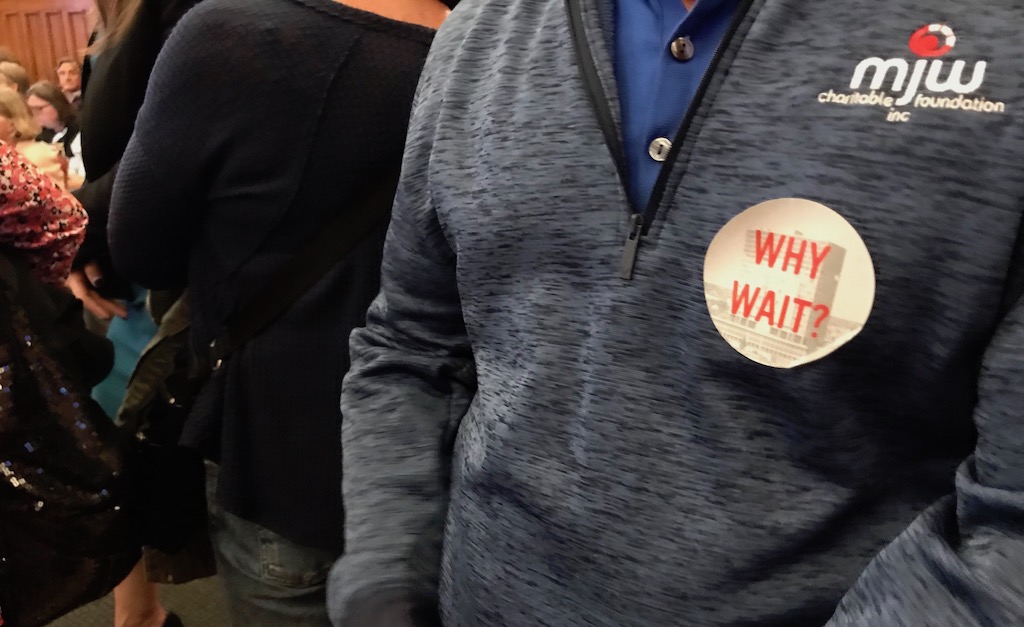 Discussion of whether to grant city parking and retail space to a potential redevelopment of East Cambridge’s former courthouse was referred by the City Council to a future meeting, but it’s not clear when that meeting will be.

Residents supporting the courthouse plan wore stickers to the council meeting Monday asking in red, all-caps lettering, “Why wait?” to urge councillors to approve the disposition of parking and retail, allowing a 22-story office tower with 24 affordable units at the base to move forward; developer Leggat McCall Properties won a state bidding war in late 2012, but work has been slowed by a lawsuit and the parking question.

“Why wait?” became less than rhetorical as the meeting dragged on – it was the first by councillors after taking most of July and August off – and ultimately stretched to around seven hours, 15 minutes, and ending at 12:49 a.m. with the disposition and much of the rest of the agenda deferred. The meeting agenda included an affordable housing overlay that residents have been debating fiercely for months, as well some other items drawing public comment: A proposal to bring a self-storage facility and affordable housing to New Street, by Danehy Park; the cancellation of the Cambridge Carnival without consulting its organizers; and a recreational marijuana law meant to bring economic opportunity to those who suffered most during the nation’s inequitable war on drugs. 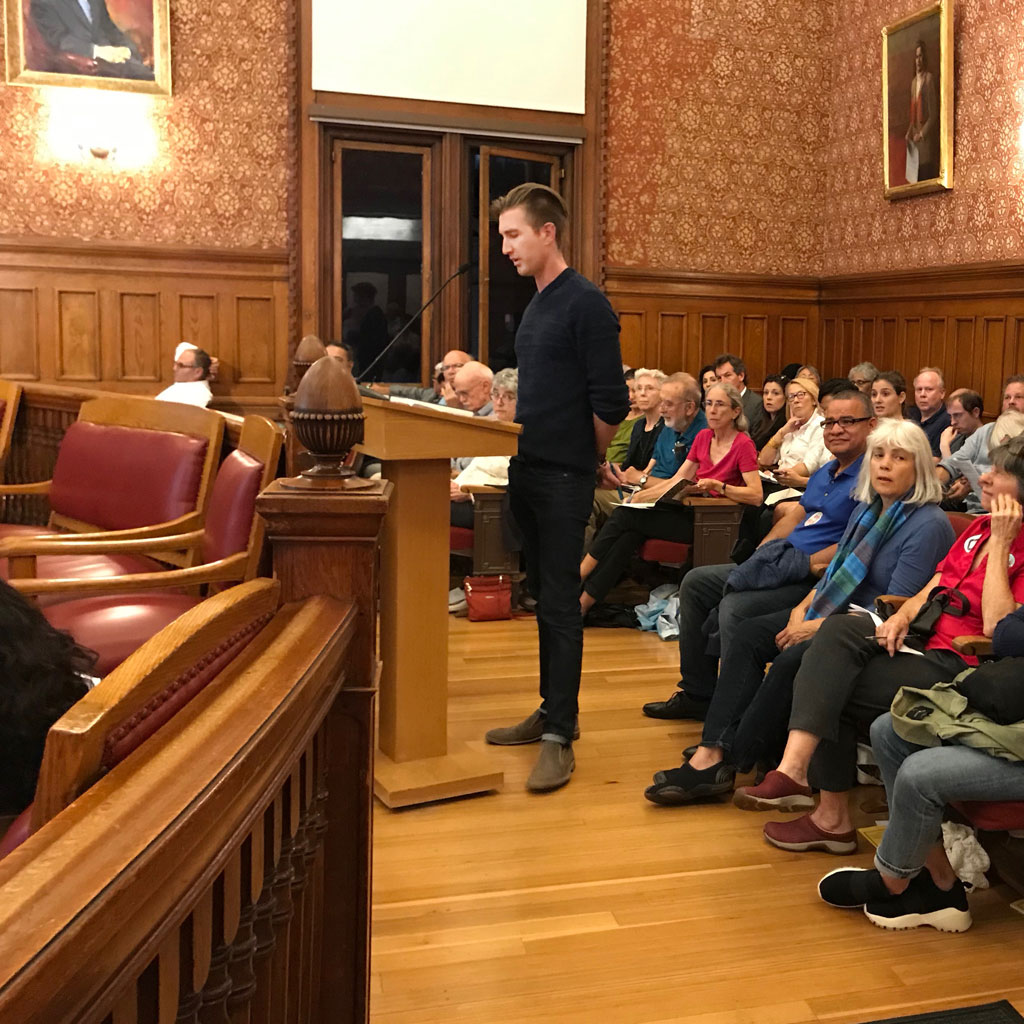 The disposition of parking and retail for the courthouse project was a special hearing all its own, meaning the regular meeting was stopped an hour into public comment on all other issues and put on pause for five hours. In that time, City Manager Louis A. DePasquale and staff made a brief presentation on the merits of the disposition, and the council heard public comment solely about it – with more than 150 people signing up to speak, officially given two minutes each, though things slowed with frequent delays to find speakers who overflowed from City Hall’s Sullivan Chamber and its upstairs seating chamber into the second-floor lobby and beyond into the Ackermann Room, where they could sit and watch the action on a monitor. On the other hand, as the night wore on, more gaps appeared on the 16 pages of speakers as some decided to go home and sleep instead.

The courthouse has been around and disliked for so long that it may be hard to maintain a sense of emergency: After being forced on East Cambridge in the 1970s, the asbestos-ridden Edward J. Sullivan Courthouse emptied out its courts and jails between 2008 and June 2014. It has been empty since, increasingly damaged from burst pipes, months of flooding, steam releases and a lack of controls for temperatures within. Upper floors can reportedly get as hot as 114 degrees.

The lengthy public comment was somewhat front-loaded with backers of the courthouse proposal and therefore for the 30-year lease of 420 parking spaces and 9,000 square feet of retail space from the municipal First Street Garage, which city staff said could turn into as little as 300 spaces taken away from public parkers and an area activated with a senior center, cafe and demonstration kitchen.

“All of the arguments really are in favor, and the arguments against it don’t hold water,” said Lois Flaherty, of Second Street. “I think the majority of people, at least my neighbors and people I know, are in favor.”

Along with those who supported seeing the building taken over by Leggat McCall for $33 million to the state, with a projected $77.4 million going to the city in benefits and leases over 30 years, were those keen to see the company remediate the building for estimates of between $40 million and $50 million. The proponents expressed a sense of urgency and even desperation driven by fears that the building has deteriorated rapidly in recent months, poisoning the neighborhood with asbestos, black mold and other toxins carried by the wind. The phrase “sick building” came up frequently. “It was in bad shape, but in the past eight months, it’s truly fallen apart,” said Jay Wasserman, also of Second Street.

Health fears were raised little by those against the project, who mainly cited disposition of space at the garage as enabling a bad deal that would continue Cambridge’s slide into gentrification. Remaking the courthouse into luxury office space would bring in thousands of workers who would want to live in Cambridge, raising what many low- and middle-income residents already find near-impossible rents; the 24 affordable units Leggat McCall will build and the “linkage” fees it would pay into the Affordable Housing Trust would still mean a net loss, they said. Further fears were that a recession would strike, and the developer would abandon its remediation of the building, or that Leggat McCall simply planned to flip it to another buyer anyway.

A rejection of the parking disposition, making Leggat McCall’s special permit unworkable, would force a new, better solution from the state, courthouse opponents said, since the city’s naked eagerness for a deal meant alternatives had never been explored. A failed deal would give the city power, some said.

“This is a game of chicken where we’re driving a tank and they’re riding a bicycle with a time bomb strapped to it,” said Sean McFarland, of Pearl Street. “They will have no alternative but to renegotiate.”

The city’s study of available spaces in the garage and other area parking options came in for criticism from some as fatally flawed, and there was wide divergence from residents who could cite firsthand experience using the garage: that it was either far emptier than even the study had said, or far more crowded.

The one point where backers and foes agreed was that they had never seen the city so divided by an issue – and in this case the warring sides were split “house by house.”

To see the project go through requires six of nine councillors’ votes, and it’s not clear when the city will know if that’s possible.

Whereas items on the regular agenda could be referred confidently to the next regular meeting, which is Monday, the special meeting for parking and retail disposition will take some figuring.

Coming out of recess

As the special hearing’s public comment wrapped up at 10:42 p.m., vice mayor Jan Devereux motioned to send it into recess, meaning that the council would be able pick up where it left off – heading directly unto questions for city staff and debate, then voting – without having to hear another 100 or so public comments.

Open Meeting Law demands 48 hours’ notice for a meeting, and at first Thursday morning was eyed for a continued hearing from 9 a.m. to noon, after which the City Clerk’s Office would need time to get the next meeting’s agenda prepared. When there were councillor scheduling difficulties that day, Friday came up, though City Hall is open only until noon. Friday looked like a lock until the city manager mentioned that neither the city solicitor nor transportation director would be available to provide input that day.

Saturday was mentioned twice as an option by councillor E. Denise Simmons, but no one else seemed to take the idea seriously.

“If we don’t come back Thursday, we’re probably looking at another week and a half plus,” McGovern warned at the start of the scheduling conversation, and his fears looked borne out at the end. “We’re going to have to recess to an unknown date at this point, and we would have to poll everybody and find out when we could do it again.”

Most councillors supported the idea of a recess motion, but some still wanted time late Monday to ask questions of city staff on “particularly pertinent points from public comment while they’re still fresh,” as councillor Craig Kelley put it. The councillors who seemed most conflicted about a recessed hearing were Tim Toomey and Alanna Mallon. “I feel like we’ve had a lot of time,” Mallon said. “This was supposed to be happening at the summer meeting, and we had an additional month.”

The compromise was to take 15 minutes and go around the room for one pressing question from each councillor who had one, though that turned into about a half-hour of mainly inquiry into how much East Cambridge had to fear from having the derelict courthouse in its midst. Last month, Cambridge Crossing resident Loren Crowe said he retrieved a chunk of material from a gated sally port on the south side of the building and sent it off for testing. It came back reportedly far higher in asbestos than was safe, Crowe said. 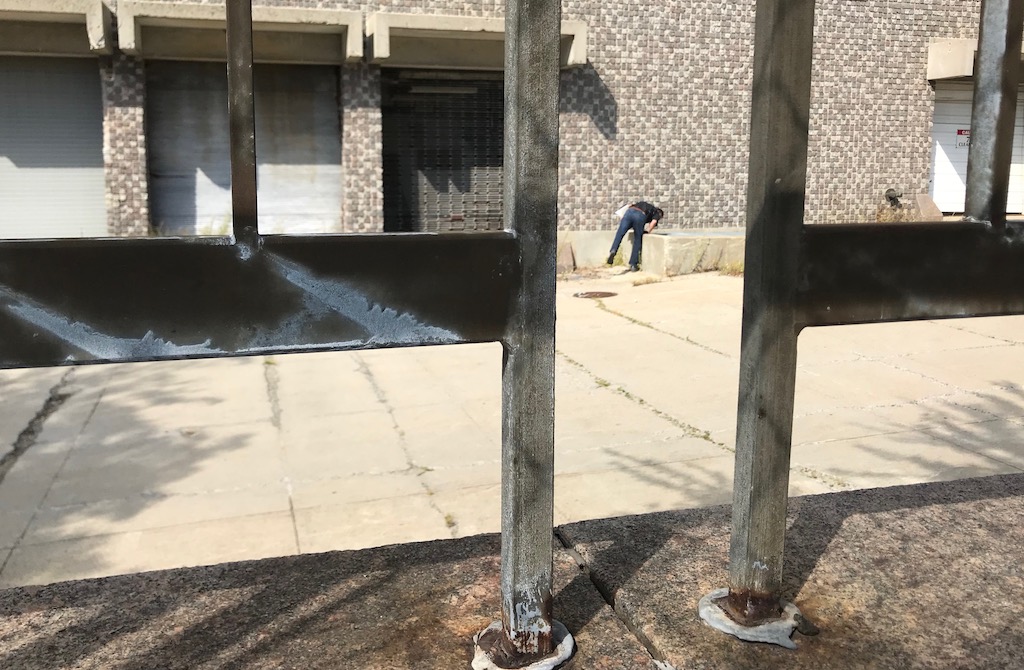 Doug Rader, a consultant for the Division of Capital Asset Management and Maintenance, assesses the courthouse Aug. 30 for environmental hazards. (Photo: Marc Levy)

The three city experts who gathered to answer councillors’ questions Monday, though, had never been to the building or had not gone inside, and reported that neither the state Department of Environmental Protection nor the contractors called in to clean debris around the building after Crowe’s visit had tested anything themselves – only looked around or cleaned and removed materials that had been treated as dangerous.

“Do you have any concerns for the safety of the neighbors?” councillor Quinton Zondervan asked repeatedly of acting fire chief Gerard Mahoney, Department of Public Works commissioner Owen O’Riordan and Sam Lipson, director of environmental health for the city’s Public Health Department. Toomey, an East Cambridge resident, echoed his concerns.

But each time, the question was met with awkward silences and tortured responses that suggested it was difficult for the three to respond. Lipson said that he was scheduled to talk again with a state environmental official “sometime in the next week,” and offered secondhand testimony that in January and recently “the humidity level was very high” inside the 22-story structure – indicating that the building remained largely sealed and there was likely no “pathway for exposure to material which has been allowed to dry and allowed to become friable.”

When Zondervan asked about the city conducting tests to ensure neighbors’ safety, as proposed in a policy order by Toomey and Mallon, the health director said it was impossible.

“It’s not just that this is state-owned property, but that the DEP has jurisdiction entirely. This is not a role the city can choose to take on,” Lipson said. “We don’t have standing to go onto the property to take samples.”

“We rely on the state,” he said. “We can ask them as many questions as we want.”

This post was updated Sept. 10, 2019, to correct that city safety officials believe the courthouse to have remained sealed tightly, as indicated by humidity inside, after being found humid several months earlier as well.