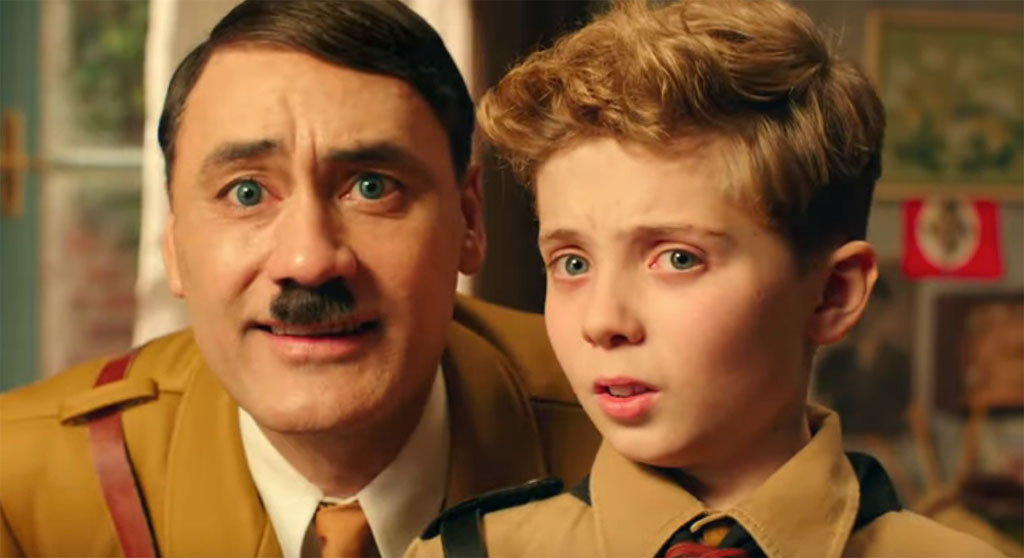 “Jojo Rabbit” is something you’re not likely prepared to see – and that’s a good thing. The best way I can lay it down: It’s as if Wes Anderson did Hitler. That’s accurate but not entirely fair, because it’s written and directed by by Taika Waititi, a creative stylist in his own right with the vampire comedy “What We Do in the Shadows” (2014) and the grand uber-hero crackup, “Thor: Ragnarok” (2017) – probably the only Marvel film Scorsese and Coppola might tolerate – to his credits. “Jojo Rabbit” takes place in Germany on the eve of major turns at the end of the war, and Hitler, played with grand, goofy gaiety and menace by Waititi himself, factors large into the dark satire about a 10-year-old boy coming of age during complicated times (to put it mildly). 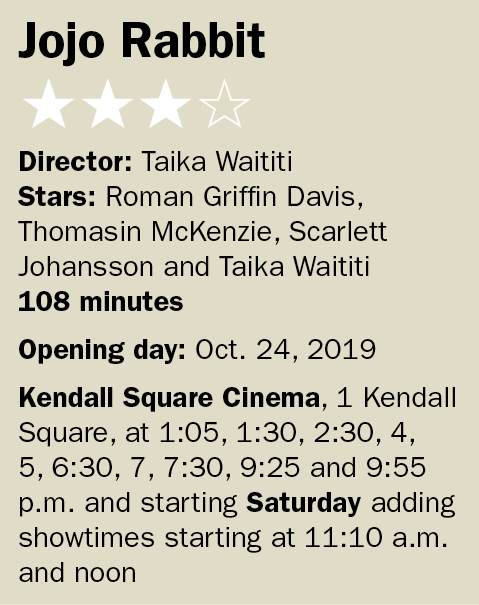 We catch up with Jojo (Roman Griffin Davis) as he heads off to a Hitler Youth boot camp for a weekend. He’s a proud loyalist and, because dad’s gone missing, his male surrogate is the führer himself. Talk about an unholy and unhealthy imaginary friend, but Waititi, who is half Maori and half Jewish, plays the part with a deft, humorous touch, giving Hitler a warm, avuncular sheen while not letting him off the hook for, well, everything.

The leporine tag of the title comes from that boot camp, where the undersized Jojo botches a test of manhood and is labeled a “scared little rabbit.” The best part about the camp is that we get Sam Rockwell as a snarky, demoted officer running things and Rebel Wilson as his chortling assistant – “Get your things together, kids, it’s time to burn some books!” Back at home, Jojo’s mother Rosie (Scarlett Johansson) doesn’t quite share her son’s all-things-Aryan zeal. Then there’s that someone hiding in the walls: Turns out mom and dad are anti-Nazi propagandists, and the older girl living in a secret compartment upstairs is Jewish, and being sheltered by mom. Jojo discovers Elsa (Thomasin McKenzie) and begins to study her (keeping a science journal detailing “the Jewish beast,” which, while shocking and telling, also becomes a major turning point in the film). As the interviews progress, a friendship begins to take seed. They never let Rosie know that Jojo knows, but in passing Jojo tells his pal Yorki (Archie Yates, whose round-faced exuberance makes him an infectious scene stealer) he’s “captured one,” and even Rockwell’s officer. But no one really believes him or cares, as the Third Reich has begun to crumble.

Beyond the wide-eyed  transformation of its young protagonist, the heart and humanity of “Jojo Rabbit” radiates through its women. Since she’s donned Lycra in the Marvel Universe and teamed up for freaky times with Luc Besson (“Lucy”), filmgoers might have forgotten ScarJo’s emotive resonate from past immersions into nuanced roles of cold alien bait (“Under the Skin”) or a dislocated American in Japan (“Lost in Translation”). She carries the part of a conflicted mother fully. You know her Rosie detests sending her son off to boot camp, but does so not only because of the bigger forces at play, but because she’s an adoring mother trying to support her progeny as best she can. McKenzie, who gave such a mature and central performance in the off-the-grid drama “Leave No Trace” (2017), ups her stock here. Her character’s somber reflectiveness and innate compassion go a long way in disarming Jojo’s regime-first reactiveness. The scenes of the two communicating indirectly while connecting on a personal level build subtly and effectively, offsetting the mad world outside.

I’m not sure if there’s such adroit, slapstick skewering in “Caging Skies,” the book by Christin Leunens on which the film is based, but in Waititi’s World War II universe, shouts of “Heil Hitler” – initially shocking – ultimately become something of a comic refrain, like, say, in a Mel Brooks movie, and Rockwell, Wilson and Waititi play their deplorables with over-the-top, nod-and-wink perfection. The material is equal parts grim and hysterical (especially the debate over which of the Allied forces are worse to humans and dogs – Americans, Russians or the British), and folk will likely seize on comparisons with “The Death of Stalin” (2017) due to the era, comedic style and subject. It’s only natural, but “Jojo Rabbit” delivers a palpable human story that touches as we laugh and the world around explodes. And somehow David Bowie and the Beatles find their way in.