‘Under the Skin’: Scarlett Johansson drags us to dark territory of otherworldly novel 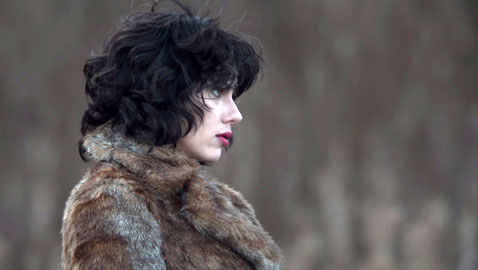 ‘Under the Skin’: Scarlett Johansson drags us to dark territory of otherworldly novel

Jonathan Glazer, whose brief cinematic résumé began with “Sexy Beast” and includes 2004’s “Birth,” purportedly spent nearly a decade trying to bring Michel Faber’s otherworldly novel to the screen. The wait is well worth it. Glazer spins rapturous scenes that will be hailed universally as Kubrickian – and rightly so – but in the process also concocts an eerie, wholly unique experience that will resonate deep within viewers’ bones. 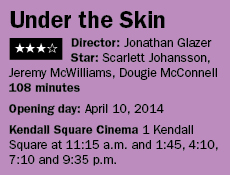 If you haven’t read Faber’s novel and have no discerning of its plot, educate yourself no more; going in less educated will yield you a better viewing experience. Glazer’s arcane imagery and Mica Levi’s all-consuming score forge an indelible confluence that is not your typical cinematic fare. Sure, there are arguably three acts, but it’s more a washing over than a sum of parts with a resolution; when “Skin” does subscribe to these traditional framework devices, that’s when it starts to loose its sheen and transcendent allure.

As strange as it may sound, American starlet Scarlett Johansson plays a taciturn female entity who patrols the weary streets of Glasgow in an austere white minivan. The credits identify her as Laura, but I’m not sure she’s given a name during the film. In any case, she’s not human. What she is and how she comes to be is part of the film’s pleasurable mystery; to tell you any more or to compare and contrast elements of Faber’s novel would be to do you and the film a disservice.

Laura’s a predator and needs human flesh and blood to sustain herself (and others?), so in her meanderings amid row houses asking for directions, she’s acutely attentive to inquiring of her hunky male marks if they have family or someone waiting for them at home. A “yes” yields a rushed drive on, a “no” means the promise of sex and a lift to a seedy, isolated house where the comely Laura sashays across a reflective black floor that has the quality of satin and the dread of night as she drops her clothes and entices her guests to do the same. What actually happens to these unfortunate lads may be an abstraction – they sink into the floor, while the celestial Laura remains able to stand on the watery surface – but the one thing that is certain is that these victims have been ensnared and are in stasis awaiting harvesting and processing.

Macabre and brutal but never outright violent, “Skin” owes as much to Johansson’s reserved performance as it does to Glazer’s provocative ambience and oblique narrative. In a dark wig and with wide, luminous eyes that seem ingenue-like and far away all at once, Johansson’s detachment is just enough to sell herself as a remorseless killer and someone not human. In the most chilling scene of the film, she stands over the sprawled form of an intrepid windsurfer who’s exhausted after trying to save an imperiled swimmer and strikes his head with a rock while the only witness in the secluded cove, a parentless baby, looks on and cries. The scene is tempered when Laura later picks up a young man whose face is disfigured badly by neurofibromatosis; she seems to take genuine pity on him, and the process of his ingestion becomes complicated.

Sadly, in the end, “Skin” can’t hold it together. Glazer and writer Walter Campbell suddenly seem to desire closure and meaning and depart from their watery interpretation. As the cards get laid on the table, the dream gets broken. Still, as much as the denouement disappoints, it’s a minor nit in a grand, arcane scheme. Few films or filmmakers (Nicholas Roeg and Gaspar Noe, to name two others) take such chances, and for such rare gifts like “Skin” we should be grateful.