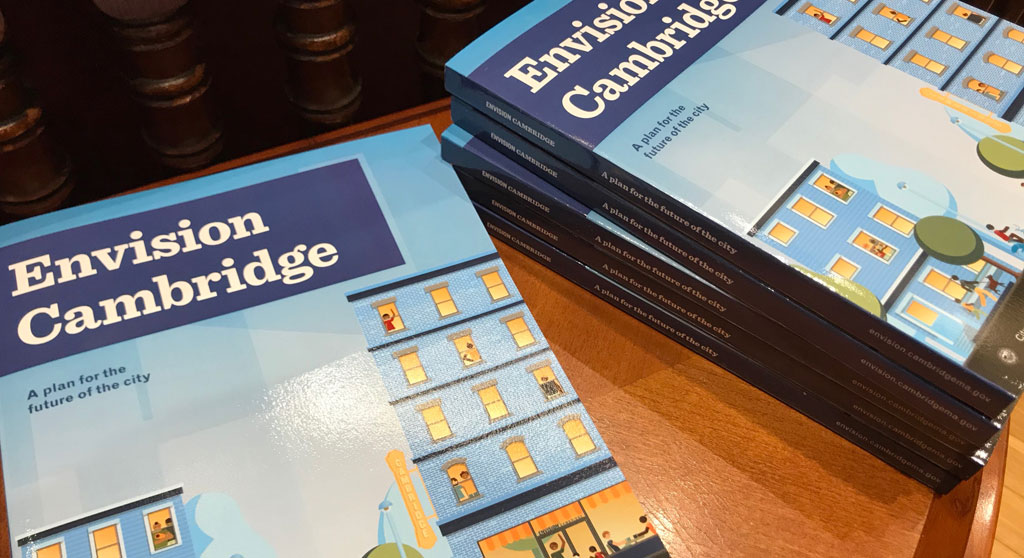 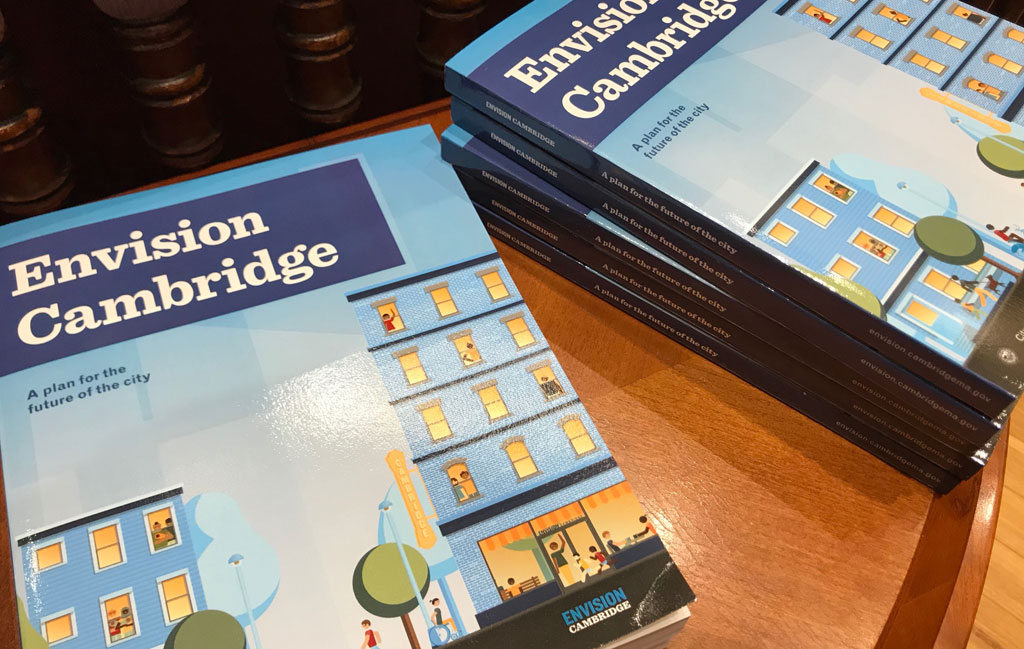 Stacks of Envision Cambridge final reports are set out at a Wednesday committee meeting of the City Council. (Photo: Marc Levy)

There aren’t population projections or goals underlying the 176 new or expanded actions for “where we’d like to be in 2030” in the final report of Envision Cambridge, the city’s three-year master planning process, city planners said Wednesday.

The only answer that came to a City Council committee Wednesday, after vice mayor Jan Devereux said she found population information elusive among the bound report’s 200-plus pages, was about where the city was heading under current zoning: to a population growing into the 140,000-to-145,000 range in the next decade from current estimates of 113,630.

That’s “just about at our peak population in the 1950s,” senior urban planner Melissa Peters said, bringing a correction from councillor Quinton Zondervan that Cambridge’s peak population – recorded by the U.S. Census in 1950 – was 120,740.

The growth of around 25,000 people in the next decade is based on estimates of two people per household for an additional 12,500 units of housing that would be built “as a way to address growing affordability challenges” and include around 3,750 deed-restricted, affordable units, Peters said.

Looked at closely, not included

Devereux said she wanted to “get a handle on what the growth looks like in terms of people, because that does obviously affect our resources, whether it’s building a school [or libraries] or the need for more services.”

And the questions about population were “great” and “certainly something that Envision looked at closely,” Peters said.

But they were not pinned down as part of the Envision process before the final report was published.

“When we did look at the projections, we looked at two particular zoning policy changes. One was what we were calling ‘super inclusionary’ and one was the incentive for net zero [greenhouse gas emission] construction. The feedback we received was that additional engagement with the community needed to be done, and we are hopeful to continue having those conversations,” Peters said. “But we kind of said, ‘Let’s not hold off on publishing the plan until we can come up with that.’”

The super inclusionary plan lets developers build proportionately bigger projects based on how much affordable housing they include with market-rate units, but it sticks largely to existing mixed-use corridors such as Massachusetts Avenue. Super inclusionary zoning was proposed in October 2018 at the same time as Affordable Housing Overlay zoning, but it was the overlay that dominated conversation until the council tabled it in September – and the AHO remained a candidate debate topic right up through November’s elections.

Super inclusionary and net zero were studied because they were the citywide scenarios most likely to result in the “highest increase in population density” and commercial construction, Assistant City Manager for Community Development Iram Farooq said.

Yet to be provided

In brief interviews after the meeting, Devereux and Zondervan expressed surprise at the vagueness of the population discussion. “That’s why I asked point blank, is that our goal? To get to 140,000 population?” Zondervan said.

But Farooq and Peters said population wasn’t a department goal at all. “Envision lays out what we are trying to accomplish in each of its areas of intervention rather than trying to engineer a particular population,” Farooq said, to which Peters added something that brought the conversation back to Devereux’s line of questioning during the meeting: “The population [figure] is less important than the community that we’re creating and the amenities and resources and services that we can provide.”

Though the planners promised on Wednesday to point the way to presentations showing the ranges of population that they did expect by 2030, and though an email was sent to both before business hours Thursday as a reminder, the Community Development Department did not send further information.

Update on Nov. 15, 2019: A link sent early Friday by the department pointed to a graph on Page 46 of an Envision report from Sept. 26, 2018, showing a potential gain of 20,800 residents through 2030 based on a buildout under current zoning. That would result in a population of around 134,430, starting from current estimates.

Councillors attending the meeting had additional items they hoped to see clarified. Devereux wanted to learn more about the creation of open space, as Envision raised the idea of each resident being within walking distance of some; Sumbul Siddiqui wanted it spelled out which of the many proposals could be handled within Cambridge government and which needed the permission of the state Legislature to pursue through home rule petition processes. 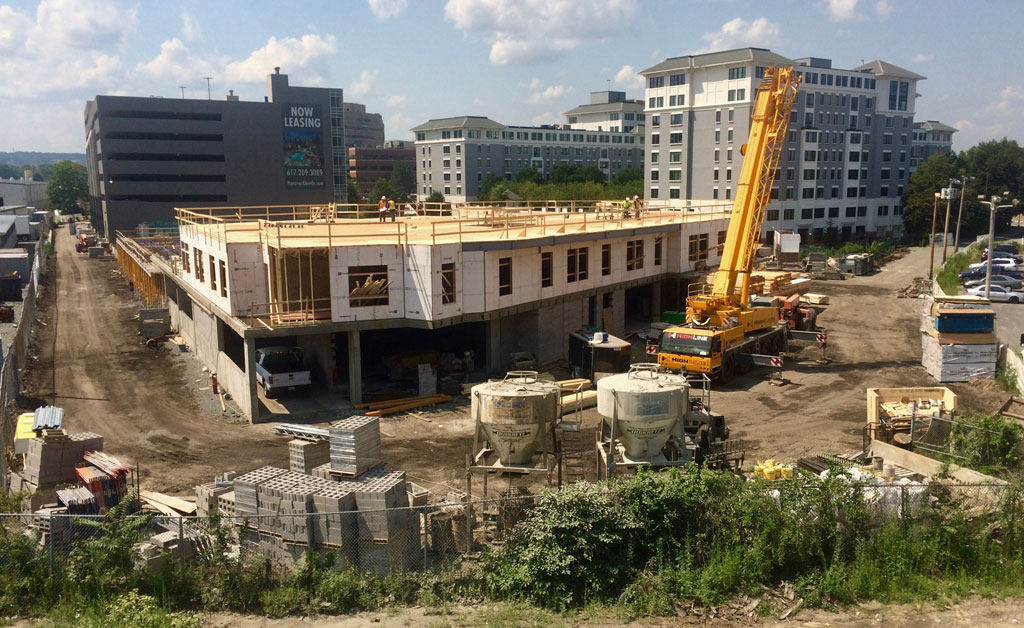 Thousands of units of housing have been built in Alewife since the passage of a 2006 plan for the area. (Photo: Marc Levy)

Also not included in the Envision Cambridge report discussed Wednesday was the Alewife District Plan, also asked about by Devereux, and Farooq said her department would be “happy to come prepared to do a presentation focused on Envision Alewife whenever the council wants.”

Devereux had raised the issue with concerns about making sure what came out of Envision Cambridge was what ultimately happened – because Alewife had seen that “residential development far exceeded what we had anticipated” from a previous attempt at planning and zoning there.

While she agreed the pace of construction for the desired mixed-use area was faster than expected, “the focus of the plan, in fact, was to create incentives to get residential there. The residential development that we have seen over the past years, in terms of its numerical value, is exactly what was being incentivized and was the intention of the plan,” Farooq said.

The idea that Alewife has turned out exactly as incentivized in the city’s Concord-Alewife Plan from 2005 may surprise many. It described creating “a neighborhood ‘heart’ for people who live, work, play, and shop in the area … overcoming barriers and establishing much-needed connections to create a walkable neighborhood.”

It was that year that residents formed the Fresh Pond Residents Alliance to complain of a “tsunami of development” in the area resulting from the plan’s 2006 zoning changes, which unleashed what organizers of one meeting called a “gold rush” of residential production that was shocking in its scale and density. (One of the organizers of that alliance: Devereux, before running for office.)

The day the Alewife District Plan was posted, Oct. 22, saw a proposal to rezone 26 acres in Alewife come before the Planning Board, where executives at developers Cabot, Cabot & Forbes, residents and board members alike seemed to share an understanding that residential growth in Alewife had far outpaced other kinds of development that would result in a neighborhood “heart” where residents could work, play and shop. “It’s been an amazing experience to watch the growth of Alewife. But one thing that is somewhat lacking is amenities,” said Jay Doherty, of Cabot, Cabot & Forbes, while residents Mike Nakagawa and Ann Stewart spoke to the board about residential development of as many as 3,499 newly built or permitted units, with Nakagawa’s figures showing 75 percent of the city’s net increase in housing since 2010 “is just in this little area.”

“We have a really lovely residential neighborhood,” resident Alisa Lemberg said. “But we don’t necessarily have the the kinds of ‘third places’ where neighbors can meet one another – anything that would help us to sort of come together as neighbors.”

It’s not the first time planners have spoken about Envision contrary to a popular understanding of the project. As preparations got underway in mid-2014, planners and consultant Kathryn Madden downplayed the role of development in the process.