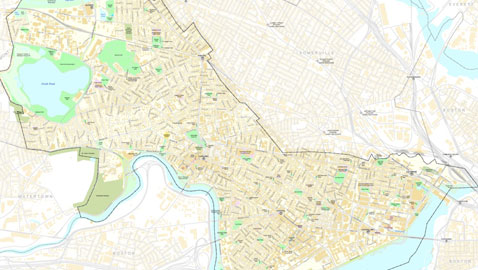 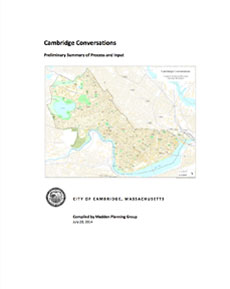 The Madden Planning Group’s “Cambridge Conversations” report presented July 28 to the City Council can be read by clicking on this image.

The more people talked about “love” last week in an early report on a citywide development plan, the more it seemed like the whole process has gone immediately off the rails.

While it’s too early to panic, there are reasons to worry:

The city’s recent history on important reports is terrible. Under old city manager Robert W. Healy the city got a 60-page report nine months in the making on an arrest that made international news and a 113-page report two months in the making stemming from a rogue official’s development decisions, together costing more than $300,000 and neither actually addressing the acts that made the reports necessary.

In each case city officials obscured blame when there appeared to be wrongdoing for which they intended no repercussions, and there’s a hint of that now: We have a Community Development Department that has long argued Cambridge has a citywide development master plan made up of a bunch of separate documents. The current order for a plan eliminated three city councillors’ request to look at state law and determine whether that tale was true.

Reports are shaped by officials at the very start. The commission formed to look at that notorious arrest was told by Healy and Police Commissioner Robert Haas to look only at “broad lessons,” with the result that then city councillor Ken Reeves ultimately was left complaining that he still couldn’t tell constituents whether they could be arrested as Harvard professor Henry Louis “Skip” Gates had been and what would happen afterward if they weren’t buddies with the president of the United States. Councillors and members of the public tore the report apart, calling it a “shabby document” done in an “odd” way that left many feeling “profoundly underwhelmed” by failing to answer basic questions and done without proper input from elected officials or concerned citizens.

When a report on the Cambridge Redevelopment Authority actions was presented, seven members of the public stood to react with disappointment and alarm. In contrast, the five authority board members congratulated the law firm that wrote the report: “It was exactly what we expected and very well done.” Board members and the lawyers giving the report talked about it being just the beginning of a process and referred to having more conversation in the months ahead, but the report was never talked about again – the fault of a board that threw away some of its new integrity by promising and delivering neither an objective look nor a conversation.

The current report already seems to be asking the wrong questions too.

The report author doesn’t know the point of her work. With this early shaping of reports in mind, consultant Kathryn Madden and Iram Farooq, the city’s acting deputy director for community development, were asked about the warm glow of comment in and about their July 28 presentation to the City Council, despite its serious underpinnings. Them arguing repeatedly that their work was not about development led to a follow-up email to them linking to headlines meant to serve as a reminder that, yeah, it really was: “Alarm over a ‘tsunami of development’ brings new call for citywide master plan”; “Citizen’s complaint to attorney general challenges city on master plan, zoning”; “Let’s actually answer the question: Does Cambridge have a required master plan?”; “Council calms fears of halted construction, decides master plan orders will be merged”; and the Cambridge Chronicle’s “Cambridge City Council addresses call for comprehensive Master Plan.”

In addition, the order that serves as Madden’s marching orders says she’s to lead a community process

discussing the range of planning, urban design and zoning issues that have recently been in active discussion across the city, including, but not limited to, all varieties of housing (such as affordable, middle income, or other types of housing units), the amount, type and location of new and existing development, pre-fabricated units, building aesthetics, transportation, traffic and congestion, pedestrian and bicycle safety, open space, streetscape design, building design, community-building, sustainability, infrastructure, climate vulnerability and economic development.

After her work, the council will:

consider recommendations and a strategy for moving forward on short- and long-range planning/urban design work [and] address the issue of a Master Plan and … help establish the city’s urban planning and community development priorities.

Yet in a July 29 email, Madden – earning $15,000 for the “Cambridge Conversations” process, according to Lee Gianetti, the city’s director of communications and community relations – still downplayed development as the reason for her work: “I agree that your sources document why the momentum built for a citywide plan, but in holding an open public process, other points of view do enter the discussion. The community input did reflect that development issues were a major topic of discussion, and they represent one of the more significant divergent themes that appeared, among others. As a shared community plan, there is a lot more work ahead to determine what the priority topics should be, and then there will be considerable discussion in the citywide plan itself on what the appropriate policies should be.”

(Emphasis in all quotes has been added.)

The report author thinks the citywide plan process may yet be called off. The introduction to Madden’s “Cambridge Conversations: Preliminary Summary of Process and Input” report includes the phrase “If a decision is made to move forward with a citywide plan.”

Asked about that “if,” Farooq gave an answer sure to surprise the speakers who sat around for three hours April 7 to debate master plan policy orders and see what emerged:

“That phrase is simply an acknowledgement that a citywide plan will require significant resources of staff time and consultant funding and hence we’ll need the official go-ahead from the City Council and city manager after we present the final ‘Cambridge Conversations’ report in the fall and the council has a chance to convene a roundtable,” Farooq said.

So the phrasing just reflects a formality? Not exactly.

“It’s also worth acknowledging that while we have heard a fair amount of support for a citywide plan, we also encountered some skepticism about the value of such an endeavor,” Farooq said.

Asked if it was his understanding that there might ultimately be no action taken on a citywide plan, especially since he was the one merging policy orders into a final form that launched the process, Mayor David Maher was silent.

Of the three councillors calling for an answer as to whether Cambridge has a legal citywide plan, Carlone was the one responding to a similar question.

“I have no doubt there will be a master plan,” Carlone said. “I would be shocked if they don’t go forward.”

Not all officials seem to be on point either. It’s true: This is just the first step in a long process, and a rushed one at that. Madden’s main message to the council last month was that more time was needed to engage more people citywide for their take on Cambridge issues. But the fact is, the comment being gathered by Madden will inform every step in the process afterward, and it helps no one if the research is bent or wasted from the start. There’s simply too much to do on stakes that are too high for Madden to be spending significant time replicating the work of the city’s biannual citizen survey, the most recent of which is here, reading much like the ones from 2010 and 2008.

But it wasn’t the comments of Madden alone that set off alarms about another city report being misdirected into abstraction.

She only contributed to the worry by saying her 18 efforts so far at gathering public comment showed “many emergent themes people agreed on, like, people love this city, people love the existing parks, healthy communities, regionalism, there was really things people agreed on” with only a brief mention that “were also many divergent themes … for instance, the balance of development and open space.”

Councillors Carlone, Craig Kelley, Nadeem Mazen and Marc McGovern all made gentle efforts to get a practical, on-point sense of where Madden’s work was going.

But then came Maher:

In this day and age of people sharing thoughts, especially online, sometime it can seem so negative. And what we’re hearing and what you heard is why people live here. And they’re not living here because of the negativity. They’re living here because they like Cambridge and they like the offerings in the city, and it’s somewhat telling just on that first read to take a look at that and see all the things that make Cambridge a special community. All of us look forward to the next phase and to 2015 when we’re doing a lot more on these issues.

And then vice mayor Dennis Benzan:

What struck me at Fresh Pond meeting I attended was that people appreciate Cambridge because there’s a lot of love. Sometimes we lose sight of that through this process of trying to figure out what’s going to be best for our city, and we have to constantly remind ourselves that Cambridge has a city of a lot of love and ultimately we are a great city and are just looking to get better.

And back to Madden:

There was a lot of love … And I think the real shared thing was everybody loves this city and wants it to be better, but it definitely came though in all the comments.

Since this love-in was part of a sole summer meeting that ran 6.5 hours and ran past midnight, listeners might reasonably be dazed into wondering, “What were we talking about again? A citywide development plan, right? Planning, right? So we avoid another Alewife, where residential development is racing ahead of projections and causing concerns about transportation infrastructure, flooding and the quality of the surrounding neighborhood?”

All of this reported love would be especially valuable if the answer to the citywide development plan were to be that – since everyone loves Cambridge so much as it is – city officials are going to freeze the city’s neighborhoods exactly as they are. But that’s absurd, especially with residents and organizations such as A Better Cambridge urging development as a means to house more citizens at lower costs, helping hold onto the city’s diversity while keeping its economic base humming.

Since non-development isn’t an answer, it would be better to have a more focused approach to setting down the foundation for a citywide plan process. You can’t get the answers you need without asking the right questions.

And even before that, let’s confirm right now: The citywide plan is about development; and it is going to happen.

This post was updated Aug. 7, 2014, with the contract rate for Madden’s Cambridge Conversations project.