‘Little Women’: The Alcott classic updated, richer in themes of feminism and family 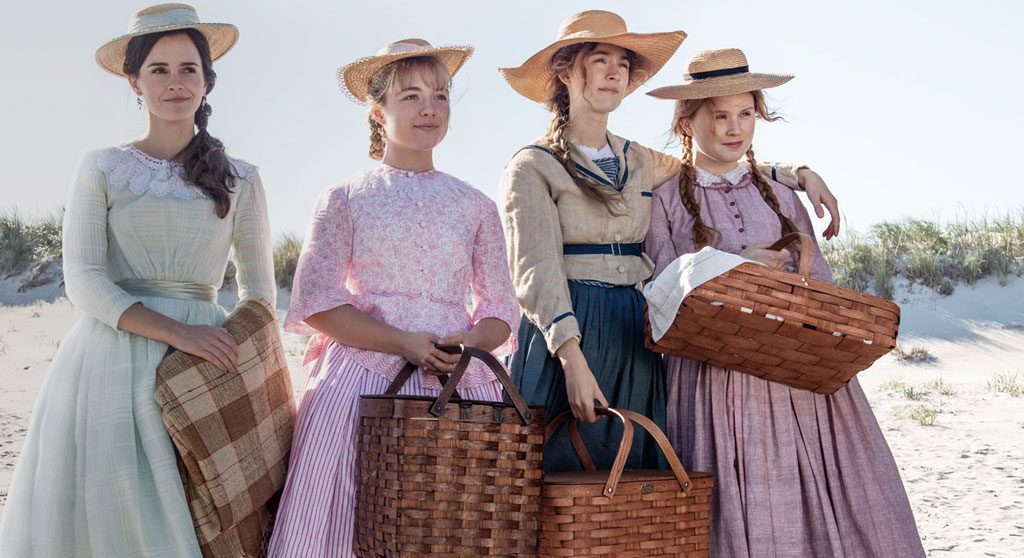 ‘Little Women’: The Alcott classic updated, richer in themes of feminism and family

The updated version of Louisa May Alcott’s autobiographical classic may prompt many to question the need, as there’s been multiple versions (TV included) of “Little Women” across the decades. But in execution, Greta Gerwig’s reworking makes good sense on many levels. First off, there’s a subtle layering in of female gaze and modern take one the era’s chauvinism. Then there’s answering the questions: Can Gerwig really make films, or was her autobiographical debut, “Lady Bird” (2017), a one-off? (A resounding yes to the first, no to the second.) And finally, this is one of the better-cast takes on Alcott’s tale. The 1994 version directed by Gillian Armstrong also boasted an amazing cast, led by Winona Ryder; the George Cukor 1933 and Mervyn LeRoy 1949 versions starring Katherine Hepburn and June Allyson respectively as Alcott’s alter ego, Jo March, hung it all on their leads. And might I add, this updating was shot here, with scenes in Alcott’s real Concord abode (Orchard House); the others were mostly local sites posing as Concord, shot on sound stages or north of the border, in Canada. 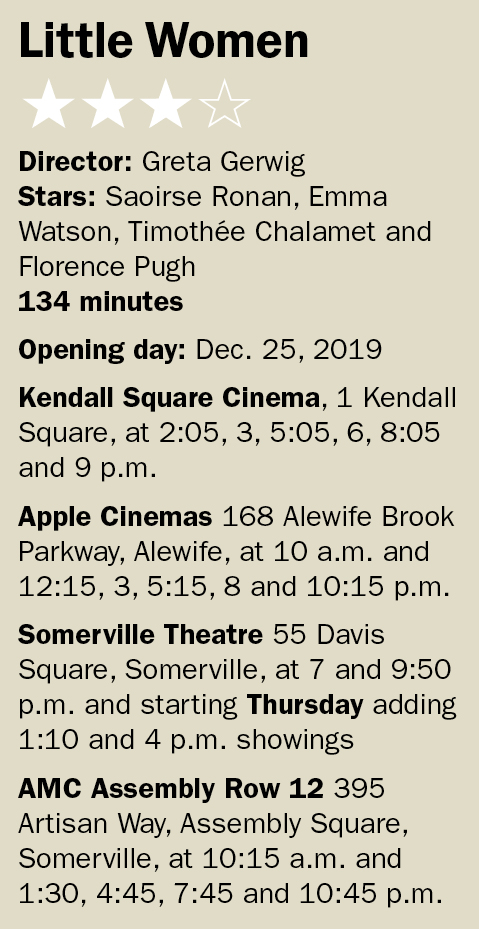 When we first catch up with Jo (Saoirse Ronan, so affecting as Gerwig’s alter ego in “Lady Bird”) she’s barely eking out a living in New York selling women-themed serials to a publisher (Tracy Letts, perfectly intimidating here, as he is in “Ford v Ferrari”) who demands endings that place the female character in a happy marriage and/or domestic servitude. We then wind back to her days in Concord where her father (Bob Odenkirk, “Better Call Saul”), a pastor and an idealist, and mother (Laura Dern, having a banner year with a warm turn here to pair with her edgy go in “Marriage Story”) have turned the house into something of an artists’ colony for their daughters’ bohemian pursuits; Jo, the writer, Amy (Florence Pugh, from “Midsommar” who crushes it here walking a fine line between vanity and vulnerability), the artist, Beth (Eliza Scanlen), a pianist and the oldest, Meg (Emma Watson) fancying the stage. Pretty rad for the time, while across the way are the well-to-do Laurences (Chris Cooper as the staunch patriarch) whose son Theodore (a passable Timothée Chalamet, who feels a long way off from his Oscar nominated “Call Me By Your Name” turn), referred to as “Laurie,” creates something of a love triangle with Jo and Amy. When younger, he and Jo were close, and the prospect of a rekindling is ever present despite Amy lurking about when young Laurence comes by to visit.

If not for financial ills and affairs of the heart, let alone the tucking under of women – offset by Jo and the March ladies’ irrepressible spirit – “Little Women” might come off simply as first-world problems. Gerwig, who scripted as well, adds a nuanced, feminist spin that renders a new essence while embracing Alcott’s work and classic context. In her treatment, Gerwig also expands the autobiographical aspect of the material – namely about money and the unconventional pursuits of her parents and the family. Alcott’s father, Amos, was an abolitionist, radical education reformer, founder of the ill-fated Fruitlands colony in Harvard, Massachusetts, and part of the Transcendentalist movement. It was Louisa May and her tales that helped hold onto and pay for the grand Orchard House. Beyond the fine direction and performances, folks will revel in the periodization of local spots (the Crane Estate, the Colonial Theatre, Arnold Arboretum and even the Fruitlands Museum) and seeing parts of Boston and Lawrence stand in for 19th century New York.